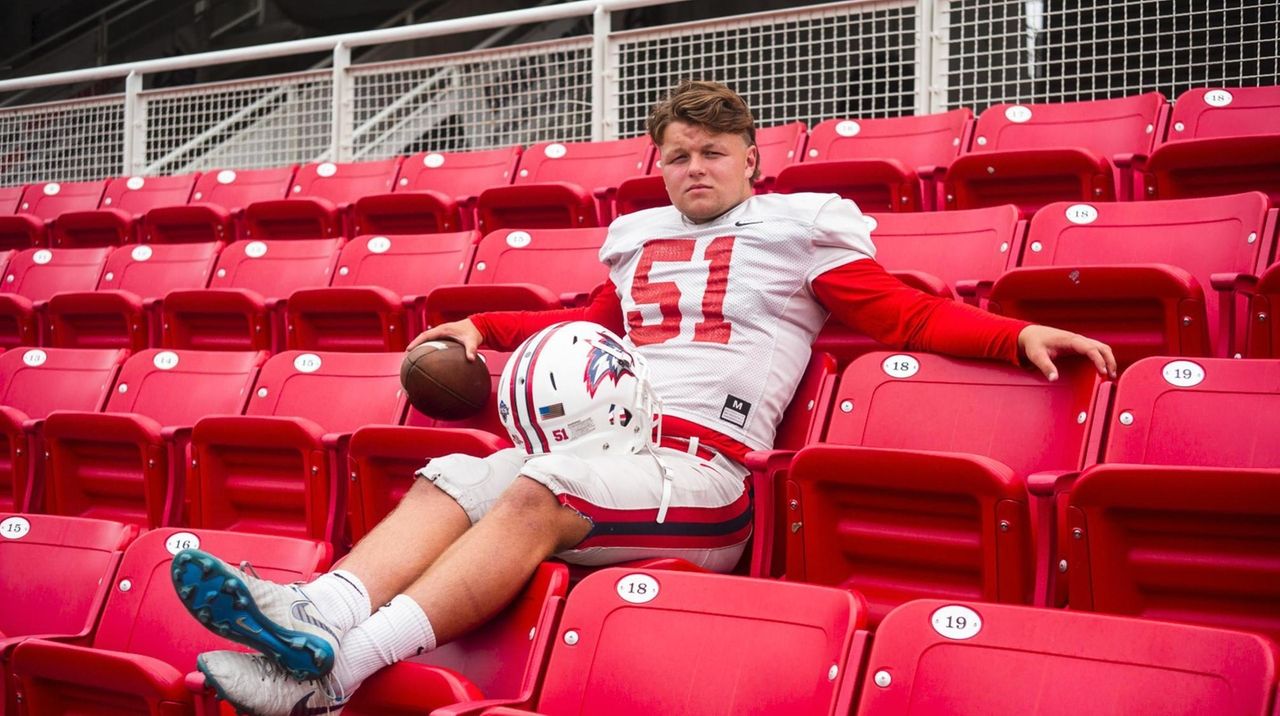 Stony Brook University junior punter Mitch Wright can and does punt with either foot -- a skill he cultivated as a boy in Australia playing Australian rules football. Credit: Newsday / Reece T. Williams

The term “unicorn” is thrown around in sports, but if there is someone who has earned the moniker, it is Stony Brook punter Mitch Wright.

Wright, a junior from Australia, can punt a football equally well with his left or right foot.

Wright’s ambipedal talent gives Stony Brook an advantage no team has had before. Opponents cannot stack one side of the line to try to block the punt, and teams at times have been forced to have two returners because they are not sure which side of the field the kick will go.

The Stony Brook coaching staff is so serious about keeping teams guessing that they would not reveal how many of Wright’s 24 punts this season (entering Saturday night) were with his left foot and how many were with his right.

Wright, who is naturally right-footed, would only say “slightly more than half have been right-footed.”

In three games last year, Wright punted four times with his left, twice with his right.

“It’s not a novelty. He’s a supremely talented athlete,” Stony Brook special teams coach Tony Thompson said. “He can kick with [either foot] and he has different types of punts that he uses. [He has] end-over-end. He can kick spirals. He has a rolling punt that he kicks. There’s a bunch of different things he can do with the football. I still don’t know all of them, but they hit the ground and do these crazy rolls and stuff.   It’s definitely a skill.”

The Seawolves soundly beat Bryant (35-10) in their season opener on Aug. 29, and coach Chuck Priore singled out Wright — who had a 62-yard left-footed punt that earned him Colonial Athletic Association weekly honors — and said he “could be a real weapon for us this season.”

Through four games, Wright averaged 42 yards per punt, put six of his kicks inside the 20-yard line and pinned opponents inside the 5 three times. He punted four times on Saturday night in the Seawolves’ 31-27 victory over Rhode Island, all with his right foot, and averaged 40 yards per punt. Three resulted in fair catches (at the 22, 11 and 8) and a 48-yarder was returned 5 yards.

Wright grew up in the Sydney suburbs, the son of two physical therapists. He had a passion for Australian Rules Football, and as a kid, he played for one of the elite teams in his region. The opportunities to play the game were limited at the college and professional level, though, and Wright instead chose to study chemistry at Macquarie University in Sydney.

It was then that a former Aussie football teammate suggested he try going to Prokick Australia, a camp founded by former New England Patriots placekicker John Smith and Nathan Chapman, a former Aussie footballer who had signed contracts with the Green Bay Packers and Chicago Bears. The camp was successful in retraining Australians to play American football and landing them college scholarships.

“I’d never considered it a possibility,” Wright said of playing football in the U.S. “When the idea popped into my head that I had skills that almost directly translate to a sport overseas where I could make the most of some great opportunities, it just seemed like something I would regret not pursuing.”

Wright, 6-1 and 225 pounds, contacted Prokick in the hopes that his skills would open the door to an education at a top university and football program in the United States.

“Mitch had character and talent — the primary things we look for,” Smith said. “And he was big, strong and had excellent hand skills.”

Smith, who had a nine-year NFL career and kicked the winning field goal in the infamous snowplow game against the Miami Dolphins in 1982, also was intrigued by Wright’s ability to punt with either foot.

“His ability to use either foot makes it very interesting, doesn’t it? No one can train to do that. It’s a gift you have or you haven’t,” he said. “There’s nothing routine for the receiving team when Mitch punts. Will he go left or right? Will we use one returner or two? A team has to consider different measures.”

Wright said there are others who can kick with either foot, but none can do it in a game.

“It takes something to develop it well enough to do in a game because you could end up looking silly,” Chapman said. “But he made the choice to pursue it and it’s a job well done.”

Wright trained for more than a year with Prokick Australia, which has been turning out American punters and placekickers for about a decade.

“In terms of being a punter, the skills are pretty similar,’’ Wright said. “In Australian football, you pass using a kick, so it’s making small adjustments to technique and working hard over a period of time on catching snaps, footwork and also rigorous strength programs to build up leg power.”

Wright said the progress he made there was “astonishing.”

Thompson, a Stony Brook alum who has spent more than two decades in coaching, had taken note of the influx of gifted Australian punters and kickers in college football.

“I was like, ‘We’ve got to get one of those guys,’ so I just gave them a call,” Thompson said.

“I’d never been to the United States until I came here to visit Stony Brook,” Wright said. “The coaches and players showed so much love when I got here — it was incredible.

“A lot had to do with me: I studied chemistry and biochemistry at my school in Australia and seeing what the standards for that is here was a big drawing card.”

Wright said he misses his family and friends back home but also loves what he’s doing. When he’s not studying or practicing, he said he enjoys books and puzzles. “Nerdy sort of grandpa things” is how he put it.

Wright trains like few other punters. Just as baseball’s switch hitters spend twice as much time in the batting cage taking swings from both sides, he had to take twice as many reps as others to perfect each foot.

Before the snap, a decision is made which foot Wright will use. He said a situation hasn’t yet arisen in which that call had to be changed at the line of scrimmage. However, he said he could catch the snap and change in the face of a rush if necessary.

Wright has this season and next to continue improving. He is studying all aspects of chemistry looking for that “eureka moment where I understand this is what I really enjoy.” But he also would like to see how much better he can get at football and where his unique skill might take him.

“It was initially a lot about the education and the opportunities over here,” he said. “But it’s definitely in the back of my mind . . . it could be a possibility. You do see a lot of punters coming out of the FCS that have great success at the NFL level. And every day I see a lot of Australians in the NFL punting and doing a great job. So yes, you definitely do see it as a possibility at the end of the road if things go well.”

Judge: Giants a long way from worrying about expectations
DeGrom's MRI comes back 'clean' after Friday injury scare
LI native Capobianco qualifies for Tokyo Olympics in diving
Coleman '100% healthy' and ready to help Jets' run game
Wahlstrom close, but no guarantee to get back in Isles' lineup
Cizikas feeling the love, wants to return it to Isles fans
Didn’t find what you were looking for?