It’s not a championship game, but this quarterfinal matchup has been billed like one.

That’s two years in a row Stony Brook women’s lacrosse coach Joe Spallina said he feels as if his team will play an NCAA championship-caliber game in the quarterfinals. But when fifth-seeded Stony Brook takes the field at fourth-seeded Boston College on Saturday at 1 p.m., Spallina said the focus will be on one thing.

“There’s such an understanding of the finality of it with a mostly senior group,” Spallina said. “This is something where with all the experience we have, we have two fifth-year seniors as captains, we understand what’s at stake.”

At stake is Stony Brook’s first appearance in the final four in program history. The Seawolves, the No. 1 ranked team in the nation and the No. 5 seed in the tournament, first must defeat Boston College on its home turf. Last year, Stony Brook lost a 13-12 thriller in the quarterfinals to Maryland, the eventual national champion.

SBU women rout Penn in second round of lax tourney Although this wasn’t another run-of-the-mill matchup against an overmatched America East team, the Stony Brook women’s lacrosse team still asserted its standing as one of the nation’s best. Hosting the second round of the NCAA Tournament, the fifth-seeded Seawolves (20-0) defeated Penn, 18-5, Sunday to advance to Saturday’s quarterfinal at fourth-seeded Boston College. Credit: Newsday / Casey Musarra

Stony Brook has been ranked first, and Boston College second, for much of the season in each of the three major polls, and this marquee matchup features two of the top players. Stony Brook’s Kylie Ohlmiller has shown a penchant for taking over games, while Boston College’s Sam Apuzzo (West Babylon) has taken centerstage for the Eagles.

Both are Tewaaraton finalists, and this game could very well have implications on that race.

Despite the impact both players will undoubtedly make, Spallina said the deciding factor will be his defense. The unit of Carolyn Carrera, Mackenzie Burns, Carlee Janelli and Brooke Gubitosi has led Stony Brook to a 6.9 goals against average, best in the nation.

Their defense can confuse teams because of its unique approach. Spallina said he started using a zone defense during his time as the Rocky Point High School girls lacrosse coach, and he’s since adapted it based on matchups.

“I put the zone in just as a way to prevent players from standing behind the cage and feeding,” he said. “Now it’s a hybrid zone that changes based on who we’re playing.” 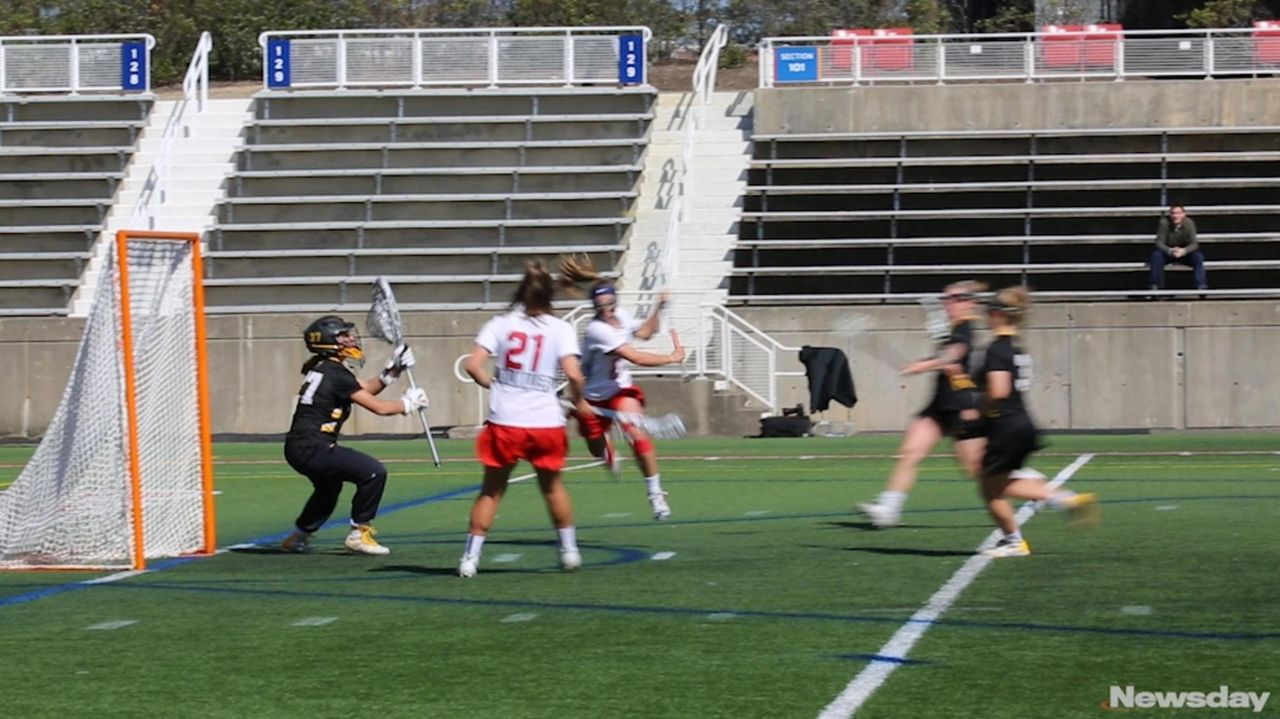 SBU's Ohlmiller breaks two NCAA records Stony brook senior Kylie Ohlmiller became the NCAA's all-time Division I points leader in women's lacrosse on a behind-the-back goal in the first half of a 22-7 win over visiting UMBC on Saturday, April 21, 2018, breaking Jen Adams' previous record of 445 at Maryland. That wasn't the only record she broke in the blowout, as an assist to her younger sister, Taryn, in the second half made her the all-time assists leader, breaking Hannah Nielsen's record of 224 at Northwestern. Credit: Joe Sullivan

Because of the zone, Spallina said he will not put increased emphasis on Apuzzo. He did say, though, that his defense “needs to know where she is at all times.”

Boston College has a diverse offense, with Dempsey Arsenault, Kaileen Hart and Tess Chandler each posting over 40 goals. A solid defense anchored by Shoreham-Wading River’s Lauren Daly in the cage makes Boston College a balanced threat.

Spallina still is confident his team can continue its run to the final four, which will be played at Stony Brook’s LaValle Stadium next weekend.

Said Spallina: “We are 60 minutes away from doing something nobody gave us a chance to do seven years ago when I took this gig.”