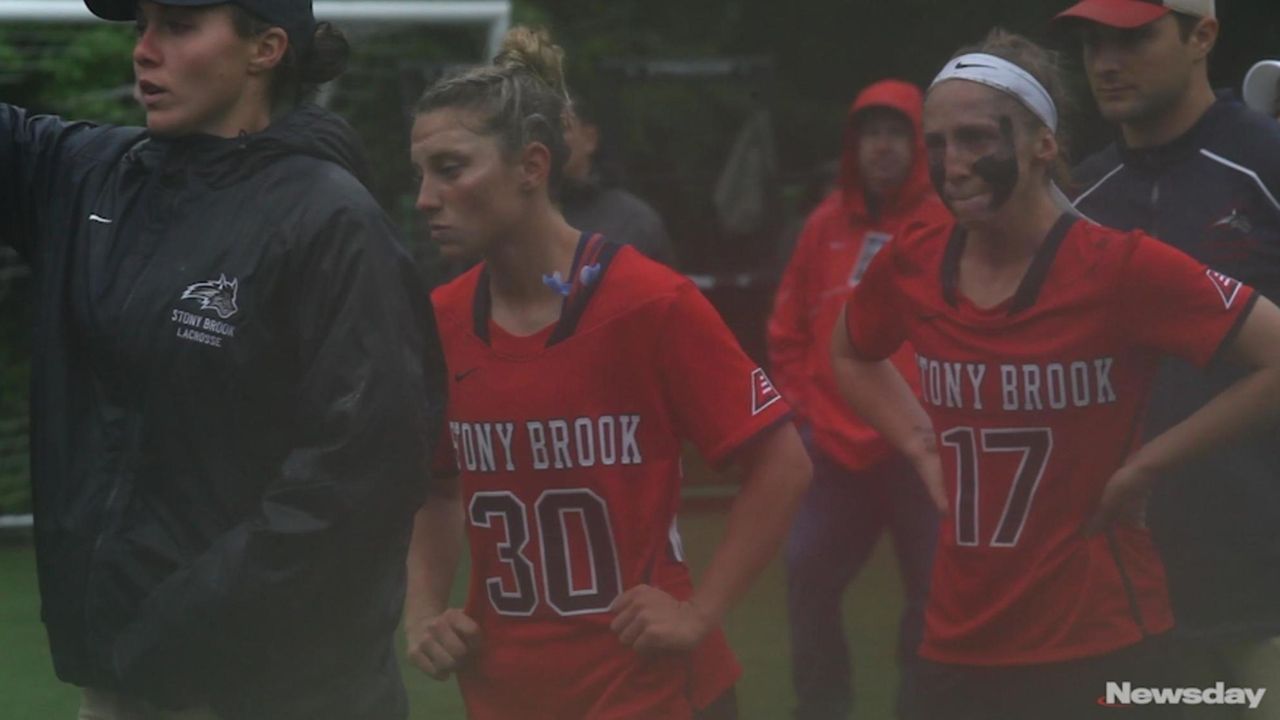 NEWTON, Mass. — Kylie Ohlmiller’s signature eye-black pattern had water-soaked streaks. There was the constant rain — and the postgame tears that accompanied a heartbreaking loss for the Stony Brook women’s lacrosse team in the NCAA quarterfinals Saturday.

In a game in which the Seawolves trailed by three and then led by three, with the score tied in the final seconds of regulation, Ohlmiller’s shot was saved by Boston College goalkeeper Lauren Daly. Then Dempsey Arsenault’s goal with 1:42 left in overtime ousted previously unbeaten Stony Brook from the NCAA Tournament, which will conclude next week on the Seawolves’ home turf.

Fourth-seeded BC defeated fifth-seeded Stony Brook, 12-11, in front of 816 fans who braved the weather to watch a classic matchup. Boston College will play top-seeded Maryland on Friday at LaValle Stadium.

“I’m proud of our kids,” said coach Joe Spallina, who was one of the first to console Ohlmiller, a senior Tewaaraton Award finalist, with a long embrace on the field. “I’d go to battle with that group of kids every day of the week. I love every single one of them.”

Stony Brook (20-1) trailed 5-2 before Tiffany Zullo capped a 4-0 run with a free-position goal, giving the Seawolves their first lead at 6-5. After Babylon’s Kaileen Hart scored for Boston College (21-1), Ally Kennedy (five goals) scored a free-position goal to give SBU a 7-6 lead just before halftime.

Stony Brook took an 11-8 lead after consecutive goals by Kennedy, the last with 15:59 left. The offense left opportunities on the field, though, and fluidity was hard to come by.

Sophomore Taryn Ohlmiller couldn’t play after tearing her ACL in the previous game against Penn. But the draw was Stony Brook’s Kryptonite, as Tewaaraton finalist Sam Apuzzo dominated the circle. Boston College outdrew Stony Brook 20-6, giving the Eagles ample chances to chip away. Chandler scored consecutive goals with 11:32 and 3:39 remaining to tie the score at 11.

“When we had it, we got good looks,” Spallina said. “We just didn’t have it enough.”

Keri McCarthy won the opening draw of overtime, but the Seawolves couldn’t convert. After the first three-minute half of overtime, the teams switched sides and awaited another draw. Apuzzo won it, and Arsenault eventually scored the winner.

“The loss is bad, and the loss rips my heart out,” Spallina said. “The worst part is when you spend the volume of time you spend with people and their families, and that being the end. In some ways it’s like you have somebody in your life nonstop and it’s just taken out. It’ll never be the same as when you’re in the trenches together, when you’re around each other every day.

“What they’ve done is larger than life in the sense that there’s not many sports that just have a bunch of kids that have taken the sport over. Maybe they didn’t come in as top 100 kids, but they’re leaving as some of the top kids to walk the planet in the sport. Their legacy won’t be decided on the fact that they’re not playing next weekend.”

In a record-setting season, one in which Stony Brook held the sport’s No. 1 ranking for every week since Feb. 26, the Seawolves fell just short of their goal.

Spallina repeatedly spoke throughout the season of his seniors, a group that helped elevate the program to new heights.

It’s his time with that group, he said, that makes the loss even harder.

“I think they set a great example for that kid who may not be pushed and recruited out of high school that you don’t have to be,” Spallina said. “You just have to go to the right place, somebody that’s going to care for you. I care about our kids. That’s the difference.”

Perhaps that’s the best legacy they could possibly leave.