Gerrit Cole #45 of the Yankees reacts against the Rays during the fourth inning at Yankee Stadium on June 3, 2021. Credit: Getty Images/Adam Hunger

There are going to be some must-see at-bats on Wednesday night when the Yankees take on the Twins in Minnesota:

And not because it’s the Yankees ace vs. a former MVP.

Cole had to defend himself on Tuesday against the extremely thinly veiled accusation leveled by Donaldson that he has been a cheater on the mound. Donaldson questioned if Cole’s spin rates went down in his last outing because the righthander was worried about MLB’s soon-to-be-announced crackdown on pitchers using foreign substances. 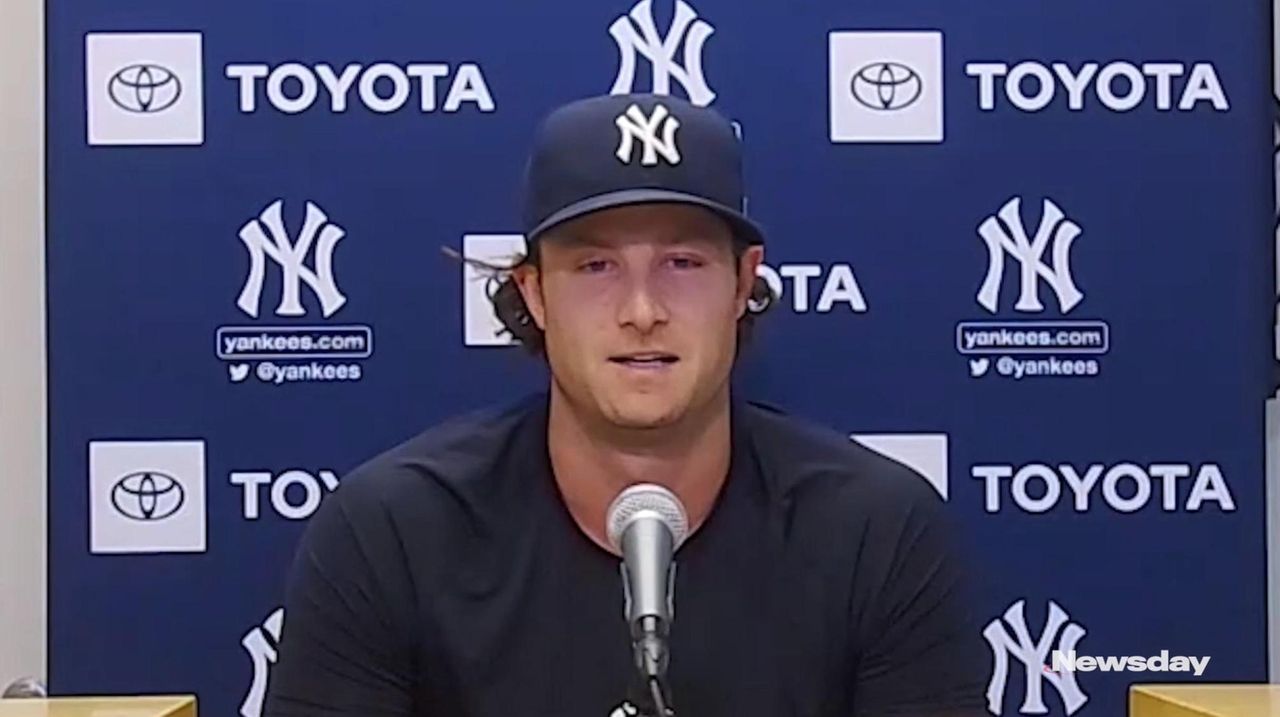 Yanks' Cole responds to accusations of sticky-substance use During a news conference on Tuesday, June 8, 2021, Yankees pitcher Gerrit Cole addressed comments made by Twins infielder Josh Donaldson regarding the alleged use of sticky substances by Cole to increase spin rate of his pitches. Cole also is asked a direct question regarding the use of Spider Tack on the mound. Credit: New York Yankees

Cole, who previously was linked to the use of sticky substances when he was with the Astros, said of being accused of cheating again: "It doesn’t make me happy. I’m not thrilled about it."

Cole, who throws 100 miles per hour, and Donaldson, who can hit a ball more than 100, can settle this on the field, mano a mano, beginning on Wednesday night.

And isn’t that what MLB is trying to do by letting everyone in on its plan to crack down on sticky substances? To put the focus back on the field and not on what some, if not most, pitchers have on their gloves or belt buckles or caps or socks to help them illegally get a better grip and a higher spin rate on the ball?

Donaldson compared the prevalence of pitchers using sticky substances to baseball’s steroid scandal. This one should be simpler to stamp out. It’s easier to check which pitchers have goo on their gloves than it is to find out which players injected themselves with PEDs. It’s not like they brought their needles to the field with them.

MLB’s plan -- which Yankees manager Aaron Boone said he expects to start soon -- is to turn its umpires into sticky substance detectives.

It’s a sensitive topic for Cole because he’s on the MLB union’s executive committee. He didn’t help his case on Tuesday when he was asked specifically if he had ever used a product called Spider Tack to help him gain an illegal edge.

After a long pause, Cole said: "I don’t quite know how to answer that, to be honest."

(Suggestion: If he had never used the stuff, the way to answer that would have been to say, "No.")

Cole went on to say: "I mean, there are customs and practices that have been passed down from older players to younger players, from the last generation of players to this generation of players. I think there are some things that are certainly out of bounds in that regard and I’ve stood pretty firm in terms of that, in terms of the communication between our peers and whatnot . . . This is important to a lot of people who love the game, including the players in this room, including fans, including teams. So if MLB wants to legislate some more stuff, that’s a conversation that we can have, because ultimately we should all be pulling in the same direction on this."

MLB probably doesn’t even have to really crack down. It just has to make a lot of noise and leak info about the crackdown that is coming. Then, maybe, one or two pitchers will get caught and earn a 10-game suspension and that will scare all the rest into playing by the rules.

Remember when Yankees righthander Michael Pineda (who, coincidentally, started against for the Twins vs. the Yankees on Tuesday) was ejected from a 2014 game against the Red Sox and later was suspended because he had obvious goo on his neck and was using it to doctor the baseball?

People around baseball weren’t upset that Pineda did it. They were upset he didn’t hide it well enough.

But times have changed. Offense is down and strikeouts are up. Games are becoming snoozefests. Pitchers have too much of an edge.

The goo’s got to go.

Cole, if he did ever use the stuff, will have to throw an undoctored ball on Wednesday night. Donaldson will have to try to hit it using only his God-given talent.