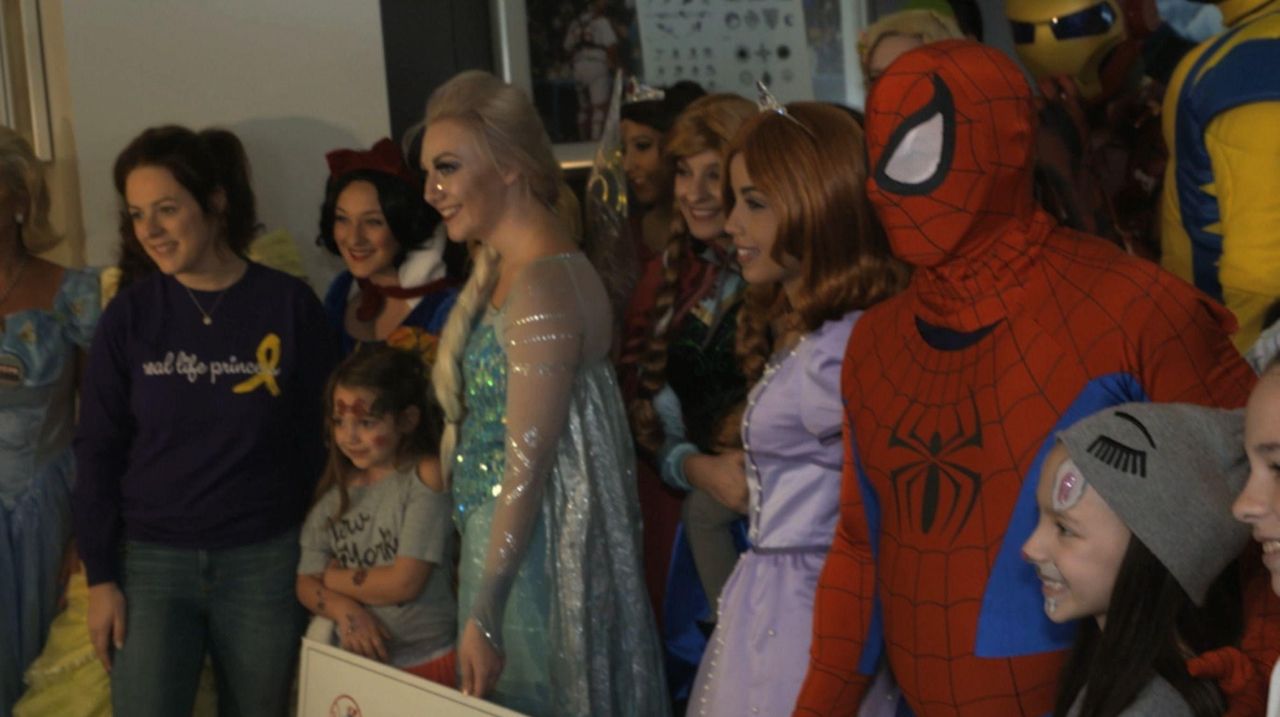 HOPE Week 2017 continued Thursday as the Yankees honored A Moment of Magic with general manager Brian Cashman, all five members of the starting pitching rotation, Jordan Montgomery, Michael Pineda, CC Sabathia, Luis Severino and Masahiro Tanaka, and player wives Amber Sabathia and Rosmaly Severino, dressed as popular superheroes to surprise A Moment of Magic volunteers at a party for children with pediatric brain cancer and their families on the Yankee Stadium suite level.Thursday's honorees were recent College of Mount Saint Vincent graduates Kylee McGrane and Maggie McAndrew, who founded A Moment of Magic in December, 2014. The mission of their organization is to "restore the magic of believing at a time when a child needs to 'just be a kid' and remind them to be brave, strong and fearless." Credit: @YankeesonDemand

On Thursday, the entire Yankees pitching rotation and general manager Brian Cashman donned superhero costumes in a Yankee Stadium club and visited with a group of children with brain cancer.

It was one of the events of this year’s HOPE Week, which the Yankees began in 2009 to concentrate some of their charitable outreach in a contained span of time. Players and staff do a HOPE Week event during the weekday and then generally play a game later that night.

Everyone involved feels good. And the good feelings usually continue during the games. In the nine years of its existence, the Yankees have a 31-12 record during HOPE Week.

Perhaps 43 games over nine years is too small a sample size to draw any conclusions about cause and effect. 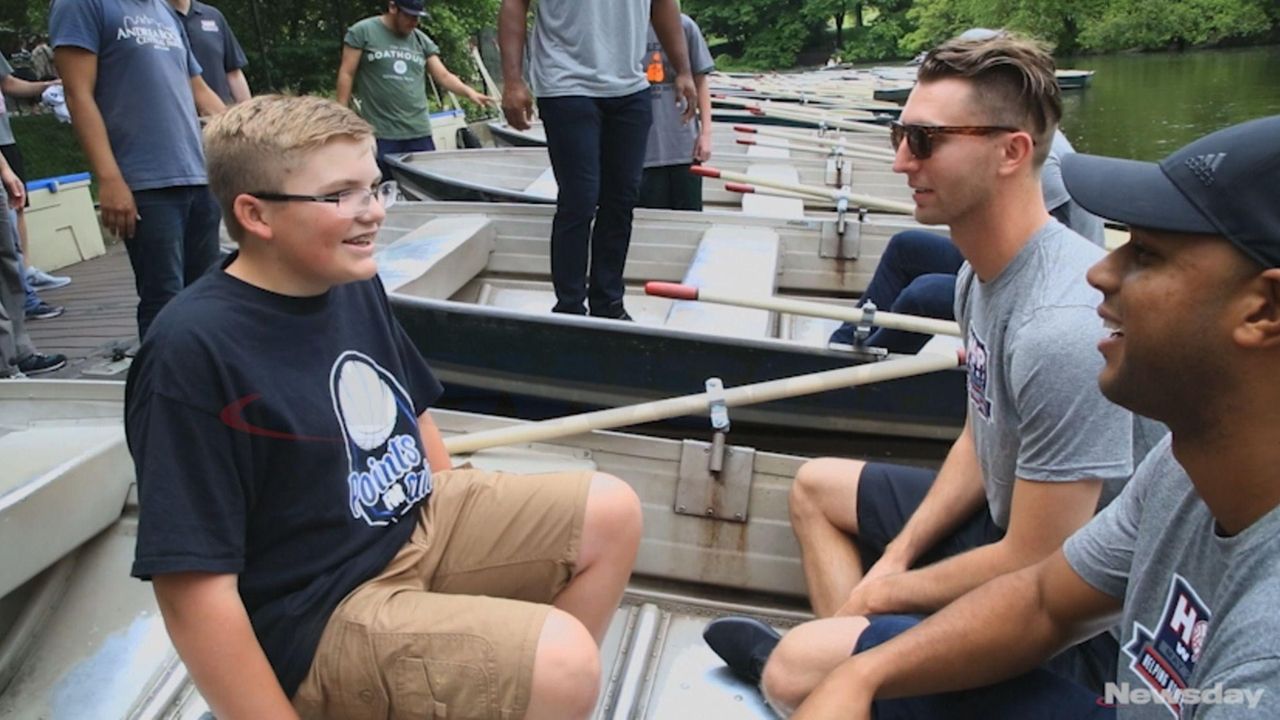 Yankees honor charitable teen on fifth day of HOPE week Friday, May 26, 2017 was the final day of Yankees HOPE week, and a day to honor 14-year-old Tyler Cashman. After seeing his mother suffer from chronic pain, Cashman wanted to provide her and those like her, relief. In 2015, as a middle school student at Old Turnpike School in Tewksbury, N.J., he saw a chance to use his position as manager of the girls' basketball team to introduce the issue of chronic pain to the larger community. This entailed collecting money from the crowd at the team games based on how many points were scored, Cashman's "Points for Pain" initiative, was used in order to donate to the U.S. Pain Foundation's Pediatric Pain Warriors Program. Credit: Yankees on Demand

Or perhaps it makes perfect sense. Studies show volunteering makes you feel better. When you feel better you are more productive in the workplace, even if your workplace is Yankee Stadium and your job is hitting or throwing a baseball.

“I’m not at all surprised, scientifically,” said Dr. Stephen Post, the Director of the Center for Medical Humanities, Compassionate Care, and Bioethics at Stony Brook University and author of many books, including “Why Good Things Happen to Good People” and “The Hidden Gifts of Helping.”

Post cited a 2010 survey of 5,000 people across America who volunteered in 2009 (25 percent of them through their workplace). It in, 89 percent said volunteering improved their sense of well-being. 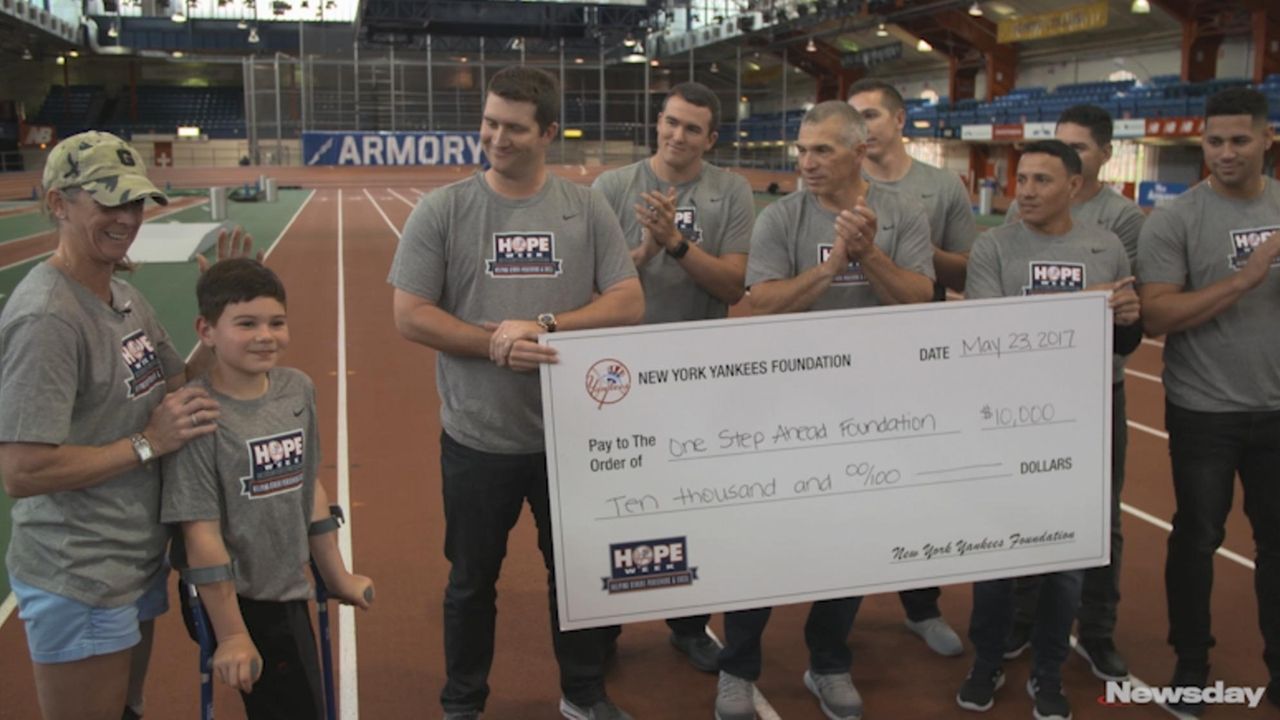 Yankees host another day of HOPE Week On Tuesday, May 23, 2017, the Yankees' HOPE Week continued by honoring Amy Palmiero-Winters and her One Step Ahead Foundation. At age 21, Amy had her left leg amputated after a motorcycle accident, and despite her disability went on to become a world-class distance runner. One Step Ahead Foundation -- a nonprofit orgnaization created to give disabled children more opportunities, while using its funds to supply prosthetics to children internationally -- was founded in 2010. Credit: Handout

“Now think about the Yankees,” Post said. “They do a little volunteering, and their sense of well-being — call it happiness — is going to be way up. (The survey asked) did it lower your stress levels? Talk about serenity and tranquillity and focusing on a baseball, right? Seventy-three percent said, ‘Yup, it lowered my stress level.’

“Seventy-eight percent — now this is if you’re in a batting slump, like who’s that third baseman, (Chase) Headley? — said ‘helps recovering from loss and disappointment.’ So if you’re in a downspin, one of the best things you can do to break out of it — and I say this seriously — is just go out and do something with people.” 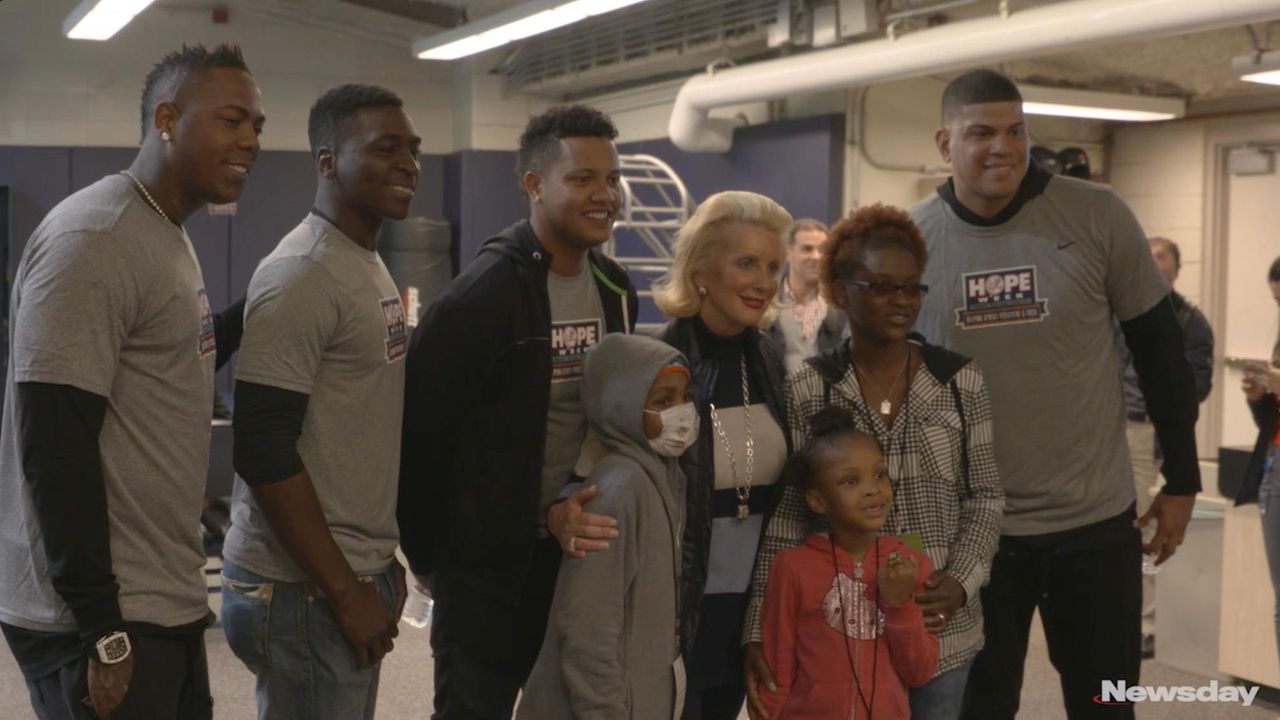 Yankees Hope Week helps Icla da Silva Foundation On Monday, May 22, 2017, HOPE Week 2017 kicked off with Dellin Betances, Starlin Castro, Aroldis Chapman and Didi Gregorius, surprising Victor and Nayyelyn García by the batting cages inside the Yankees clubhouse at Yankee Stadium. After some hitting lessons with Castro, Victor, Nayyelyn, their mother Ana and representatives from the Icla da Silva Foundation took a trip to The Bronx Zoo, where they ate lunch together before visiting the exhibits. In 2015, Victor was diagnosed with a rare form of leukemia known as Biphenotypic Acute Leukemia (BAL), a dire diagnosis without known causes or effective forms of simple treatment. The Icla da Silva Foundation was able to fly the family from the Dominican Republic to the New York-area in August, 2016, picking up all travel and medical expenses. One month later, Victor's little sister Nayyelyn successfully donated bone marrow to her older brother at Yale-New Haven Teaching Hospital in Connecticut. Credit: Yankees on Demand (@YankeesonDemand)

“It’s cool,” Sabathia said. “It’s fun to be able to experience this, especially with your teammates. To give back and to see the impact that we can have on a community.”

What about the idea that it may help the Yankees perform better on the field, too?

“I hope so,” Sabathia said. “Hopefully we can keep winning this whole week.”

According to Post, even less enthusiastic employees who have to be cajoled into doing volunteer work usually get something out of it that they didn’t expect.

“The bottom line,” he said, “is most people who do this because it’s kind of an expectation, the light turns on and they do have kind of an emotional transformation.”

Of those in the 2010 survey who volunteered through work, Post said: “Seventy-six percent of them felt better about their employer as a result. So when those Yankees are out there in the Bronx, three-quarters of them are going be even prouder than they would normally be just because they’re Yankees.”