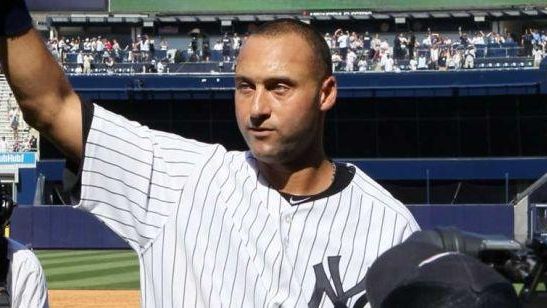 Yankees manager Joe Girardi and Yankees teammates Jorge Posada and Mariano Rivera talk about their long history with Derek Jeter and what it means to them and to their Captain. Videojournalists: Mario Gonzalez, Jim McIssac and David Pokress (July 9, 2011).

Two days were all Derek Jeter had left before a hard deadline, and two days represent just a moment in the long baseball season. That was fine, though, because nobody seizes a moment better than Jeter does.

It turns out he had been lying when he said he wasn't feeling the pressure of getting his 3,000th hit at home.

"Damn," he recalls saying when Friday night's game was rained out, leaving him only two days to get two hits. Otherwise, he almost surely would get it on the road.

Darn right he felt the pressure, which is the biggest reason why he got the hits Saturday. 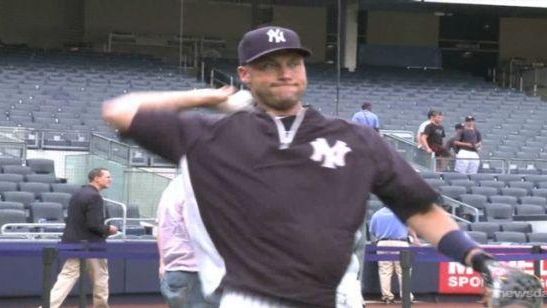 "He has never had a problem with pressure in his life," Joe Girardi said Saturday morning before Jeter got to 3,000 -- and three beyond that.

Pressure doesn't knock Jeter down, it pumps him up. You give Jeter a moment, he'll give you his first home run at Yankee Stadium since last July 22.

Give him a moment and he'll give you the first five-hit game at the new Stadium, which some have called The House That Jeter Built.

Jeter isn't the greatest Yankee ever and he isn't the same player who stroked the lion's share of those hits. But he still has his moments, and Saturday was one of the better ones you will see on this side of the postseason.

He needed six hits once he got back from the disabled list Monday and he got them in five games. He didn't just get No. 3,000, he hammered a home run.

"I didn't want to hit a slow roller to third base and have it replayed forever," he said. He didn't just get the two hits that everybody wanted to see, he went 5-for-5.

"That's him," Mariano Rivera said. "He takes the challenge. He takes it personally."

Joe Torre, who was at the Stadium Saturday, said on his way out, "Nothing he does should surprise anybody. He has always been the guy to rise to the occasion."

Usually, it is not so much that Jeter rises to the occasion as it is that he stays nice and calm while the occasion becomes too much for everyone else.

Not that any of us knows what makes him tick -- keeping the world at arm's length while making everybody think they know him is another one of his skills -- but it seems that he just keeps going at his own speed.

How does he do that? First of all, the guy is really good. Second, he is confident, which helps when he is in the fire. Third, based on the other two attributes, he stays composed. You might say it adds up to staying in the moment.

But Saturday was a little different. It wasn't a matter of keeping cool while everyone else was getting overheated. The pressure was all on him.

Jeter admitted that when David Price (the pitcher who had allowed hit No, 2,500 in 2009) prepared a 3-and-2 pitch in the first inning, "He could have thrown it in the dugout and I would have swung."

Still, this wasn't just a game in which Jeter had a couple of hits. He turned the whole day into Jeter's Greatest Hits.

It showed that Jeter, even at 37 and with his batting average fading, still has something that most guys don't. You have heard the clamor to move Jeter out of the leadoff spot. Fine. But this peanut stand says the Yankees should not be so hasty on that one. Don't mess with the qualities that make Jeter the man of the moment.

Jeter's moment has lasted 15 years, and it is not over yet.

DJ3K: Derek Jeter reaches 3,000 hitsJuly 9, 2011: 5-for-5 and a home run off Tampa Bay's David Price for 3K 23-year-old New Yorker grabs No. 3,000Christian Lopez could have cashed in after capturing the ball Derek Jeter hit into Section ... Jeter homers for No. 3,000; finishes 5-for-5With one emphatic shot that landed in the leftfield bleachers, Derek Jeter landed all by ... Davidoff: Salute Jeter's play, not his legendIF you're looking for a Derek Jeter comparable in Hollywood, how about George Clooney? Or ...

Jets DC Ulbrich says 'it hurts' the way the defense is playing
Robinson gets bench role with Noel starting for Knicks
Nash leads Nets against friend and mentor in Mavericks' Kidd
Mets facing competition from A's in managerial search
Will MLS Cup appearance help NYCFC get its own stadium?
The QB irony of Chargers vs. Giants this week
Didn’t find what you were looking for?