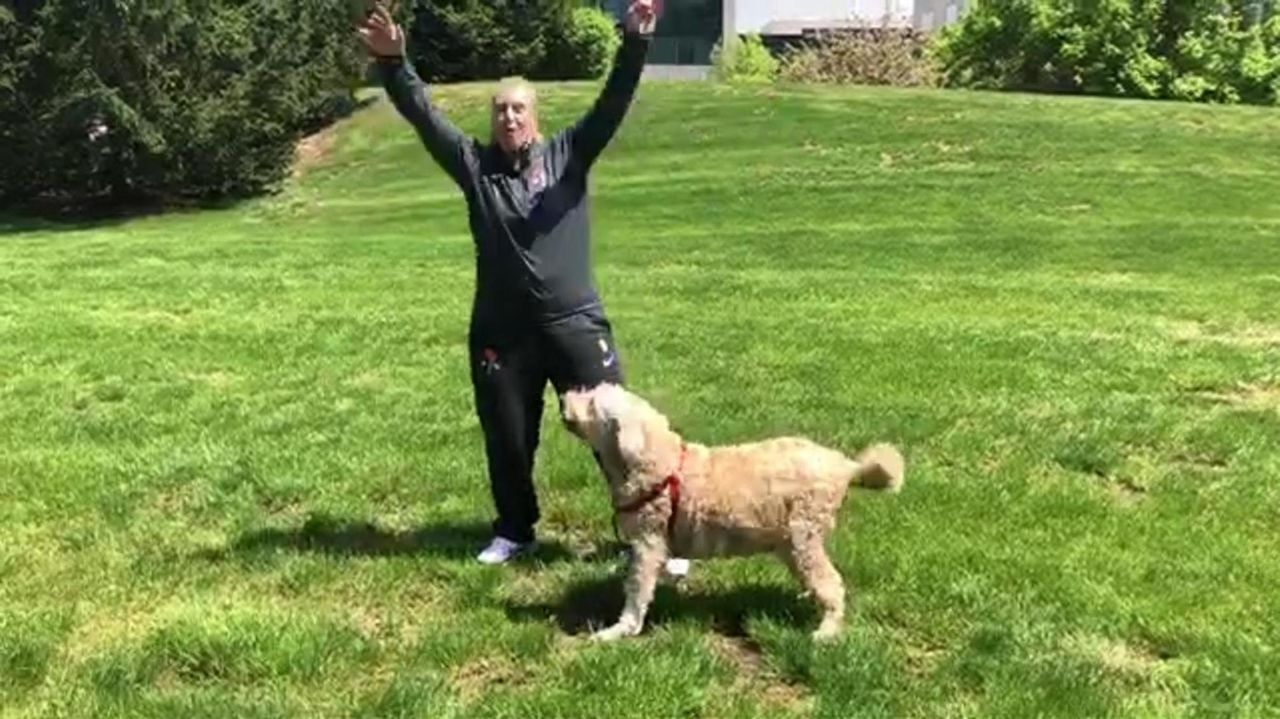 On Saturday, Liberty head coach Katie Smith took a few moments to show off her 14-year-old dog, Logan, named after Smith's home town of Logan, Ohio. Smith brings Logan to the team’s practice facility, and he wandered in and out of her office during a recent interview. Credit: Kathleen Malone-Van Dyke

GREENBURGH, N.Y. — Katie Smith is a planner. Her desk at the Liberty’s practice facility is dotted with Post-it notes and reminders. Smith keeps a to-do list on one legal pad and uses another for brainstorming. When she has to write something, she admits she might go through 15 drafts before she gets it to where she wants it to be.

Yet, if there’s one thing that Smith learned in the 22 years since she graduated from Ohio State as the Big Ten’s all-time leading scorer, it is that life doesn’t always go according to plan. If it did, Smith would be a dentist in Ohio instead of one of the greatest scorers in the history of the game and the new coach of the Liberty.

“I knew I wanted to be an Olympian and maybe play overseas, but I thought I was going to have to get a real job some day,” Smith, 43, said. “My dad was a dentist. So I applied to dental school and then deferred.”

The deferment would be a lifelong one; Smith likes to joke that she still doesn’t have what her family calls a “real job.”

That’s because the basketball landscape changed dramatically in 1996, the year she graduated from Ohio State. Looking to cash in on the popularity of the women’s college game and Olympic team’s gold medal, both the American Basketball League and WNBA were formed. Smith signed with the ABL’s Columbus Quest straight out of school, launching what would end up being one of the most impressive professional careers in the history of the game.

Smith, who will be inducted into the Naismith Memorial Hall of Fame this September, is the all-time leading scorer in the history of women’s professional basketball, having combined for 7,885 career points in the ABL and WNBA. During her 14-year WNBA career with five teams, she was a seven-time All-Star and won two titles playing under Bill Laimbeer with the Detroit Shock.

“I think Katie is one of the smarter players I’ve ever been around,” said Los Angeles Sparks coach Brian Agler, who coached Smith in Columbus, Minnesota and Seattle. “She picks things up, she’s an intelligent person and a great competitor.

For someone who has traveled the world, Smith is a bit of a homebody. She likes cooking and makes a “mean banana bread.” She is so close to her 14-year-old dog, Logan, that she bring him to the team’s practice facility and he wandered in and out of her office during a recent interview.

Smith owns a house in Columbus and as her playing career was winding down, she was looking forward to not living out of a suitcase. Minnesota coach Cheryl Reeve, an assistant on Detroit Shock teams Smith played on, recalled Smith telling her straight out that she would never go into the profession. Smith even went back to school at Ohio State in the offseason to get a graduate degree in dietetics, thinking when she retired from playing she would go into some kind of health counseling.

Laimbeer, however, wasn’t hearing any of it

“I knew she was going to be a coach,” Laimbeer said. “There was no question about it. Her competitive spirit, her knowledge of the game, I just knew she wasn’t not going to leave basketball. It is correct to say I knew it before she did.”

In 2013, Laimbeer took the Liberty head job and convinced Smith to play her final year with the Liberty before joining him on the bench. Both say the plan all along was for her to replace him, which she did in October when he left to take the Las Vegas Aces team that relocated from San Antonio.

Few rookie coaches get to take over a team with the kind of talent that the Liberty has. The team, which opens the season Sunday in Chicago, has the basic core roster that finished the regular season last year with 10 wins in a row before losing in the second round in a one-and-done playoff.

At the same time, few coaches — rookie or otherwise — have had this much dropped on their plate in the past seven months. In November, MSG Company, the team’s owner since its inception, announced it was putting it up for sale. The team, which has yet to settle on a buyer, announced in February that it would play only two games at Madison Square Garden this season. For the rest of the schedule, the team will play their home games at the 5,000-seat Westchester County Center in White Plains.

There were some long nights this February with Smith and her staff talking and texting with their players who were mostly overseas and understandably confused by the move to a much smaller and less glamorous venue.

Smith is a glass half full person. She learned early in her career that even the most careful of planners has to be flexible. One by one, she kept her players on board, emphasizing that they were all going to go through this transition together.

“Uncertainty in this career is the nature of the beast,” Smith said. “I’ve been traded before. The ABL folded. The Detroit Shock folded. Everyone on the team has had uncertainty in their lives. It is what it is and we have to embrace what happens. We still get to play and do what we love.”

Even if it’s something they didn’t plan for.

After 3 seasons atop East, Liberty aim higherEvery few weeks, Shavonte Zellous would shoot off a message from across the globe, asking ...

Castellanos stays with NYCFC on new five-year deal
See the schedule for the Isles' first-round series vs. the Penguins
Isles to play Game 1 against Penguins on Sunday
Frazier sees similarities between Thibodeau's and Holzman's Knicks
Harden returns with double-double, Nets romp past Spurs
Dominant Cole fans 12 in eight innings as Yanks top Rays
Didn’t find what you were looking for?