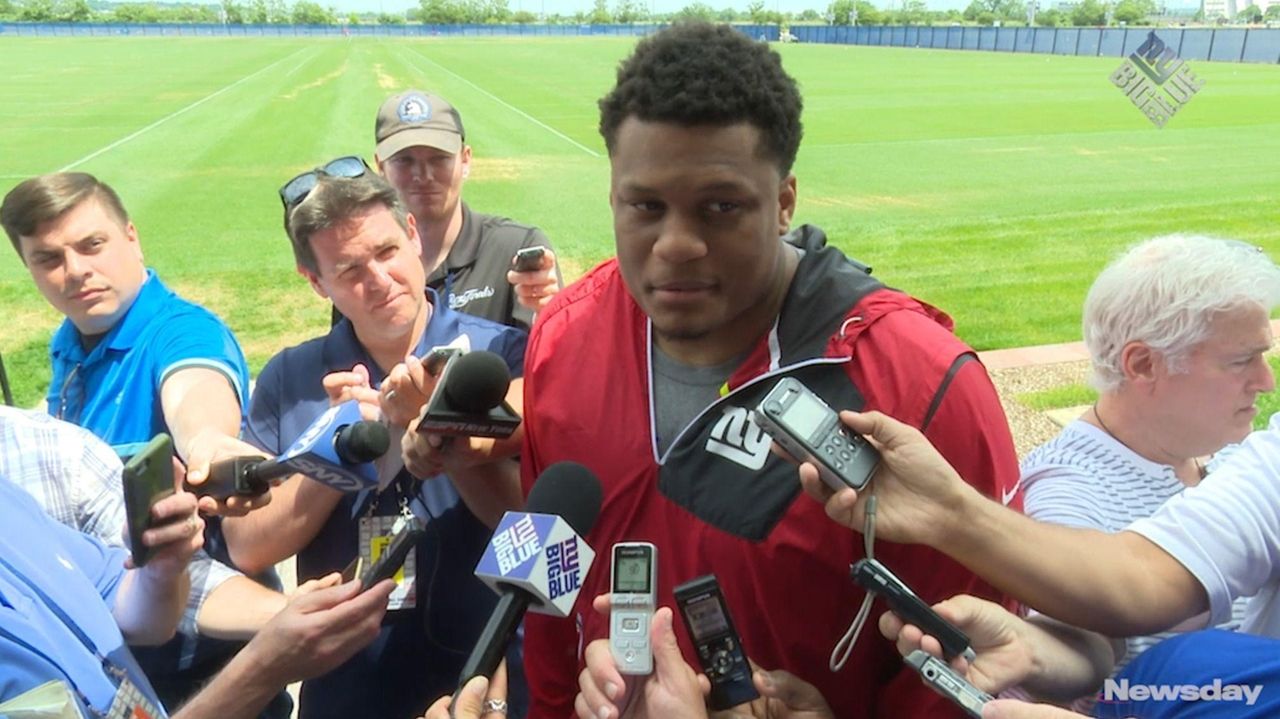 On Thursday June 15, 2017, Giants offensive lineman Ereck Flowers talked about how he focused his offseason on better conditioning and a more disciplined approach to the fundamentals of his position. Credit: Big Blue Entertainment

He certainly looks different, thanks to a better diet that has resulted in weight reduction, although he won’t say how much. And coaches tell you there is an unmistakable improvement in his technique, as well as his quickness.

But third-year left tackle Ereck Flowers won’t truly know if his concerted efforts at better conditioning and a more disciplined approach to the fundamentals of his position will translate into more tangible development when it counts most: on game day.

“I’ve gotten better, but we’re not in pads, so it’s not real,” the Giants’ 23-year-old lineman said Thursday after the team’s final minicamp practice. “It’s in the game where you really see the difference.”

The Giants are banking on legitimate improvement from Flowers, which explains why they didn’t do as many had expected in the draft and select a potential replacement for him at left tackle. The Giants instead took Mississippi tight end Evan Engram in the first round and didn’t select an offensive lineman until the sixth round, when they took Pittsburgh tackle Adam Bisnowaty.

The decision showed general manager Jerry Reese still believes in Flowers, the ninth overall pick out of Miami in 2015, and that time and technique will ultimately prevail in the young player’s development. Flowers underscored that belief by remaining in New Jersey throughout the offseason to work on his conditioning and his craft.

“I think this might have been the smartest I’ve worked,” he said. “Just from diet, to specific things I’ve targeted.”

He also took up boxing.

“I’ve seen a lot of [fellow NFL players] do it,” he said. “I think it’s helped me. Hand quickness, hand placement, practicing punching.”

Hand punching is actually part of an offensive linemen’s tool box, so boxing has helped Flowers become more adept at that part of his job. And his coaches have raved about his improvement, even if it may be premature to assume that Flowers will indeed be significantly better once the games start.

“We’ve seen Ereck make progress, and we just need to continue with that progress,” Giants coach Ben McAdoo said. “Conditioning, lighter on his feet, playing with better [knee] bend. We have to see it when the pads come on. That’s just the next step in the process.”

Flowers has plenty of improving to do, and whether he does may have a direct bearing on the Giants’ fortunes. Flowers has been dreadfully inconsistent in his pass blocking his first two seasons; he was Pro Football Focus’ lowest-graded tackle in 2015, and his 59 quarterback pressures allowed last season were the second most in the NFL. Eli Manning regressed last season after two markedly improved years under McAdoo, in part because he was frequently under duress becaues of Flowers’ leaky pass blocking.

With the addition of Engram and free agent receiver Brandon Marshall to an offense that already includes receivers Odell Beckham Jr. and Sterling Shepard, Manning can surely thrive if he gets more time to throw. Flowers vows to do his part and answer the criticism, much of which comes from within.

“I don’t think there’s any player that doesn’t look back and see where they could have done better,” Flowers said.

Flowers’ struggles weren’t limited to the field. After a regular season loss to the Packers last season, he shoved a reporter and was disciplined by the team. Flowers later apologized to the reporter in a telephone call.

Asked Thursday if he had any regrets about last season, Flowers simply responded, “No.” He insists he hasn’t lost confidence, either.

“What’s the point of being out there if you don’t believe in yourself,” he said.

“Short-term memory, that’s what coach says, on to the next play,” he said. “So I’m not worried about last year.”

There will be no need to worry about last year, as long as this year results in better play from one of the Giants’ most important players.