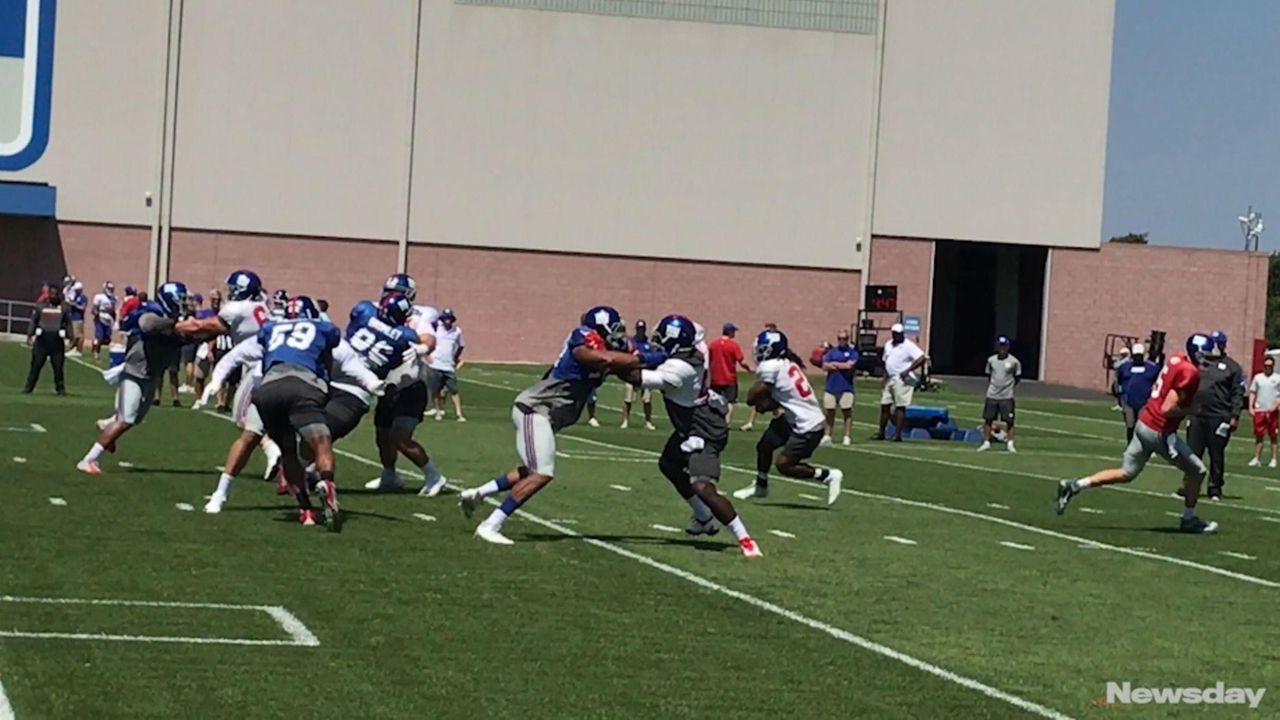 Paul Perkins is going to have an expanded in the Giants' offense in 2017, his second season with the team.  Perkins, a fourth-round pick in 2016, is confident in his ability to handle the job as the No. 1 running back. Credit: Newsday / Tom Rock; Big Blue Entertainment

One by one, the big names came.

And then they went.

First it was Adrian Peterson.

Each time one of the NFL’s most recognizable running backs became available in the offseason, speculation immediately turned to the Giants as a potential landing spot. With the Giants’ running game in need of dramatic improvement after producing woefully anemic numbers last year, it stood to reason that the team would express interest in any of the three, even if they were unwanted by their previous teams.

“I mean, everybody was telling me that AP could have come here, or Charles or Blount,” Paul Perkins said as he sat outside the Giants’ locker room after a training camp practice. “It wouldn’t have bothered me, because it would have been just another opportunity to have fun and produce.”

But rather than go with more established veterans, the Giants stuck with Perkins, a second-year running back out of UCLA who showed enough promise late last season to surpass Rashad Jennings as the No. 1 back. Jennings found work outside of football with what turned out to be a winning performance in the “Dancing With the Stars” television series, but Perkins now has the chance to solidify his position as the team’s present and future tailback.

That message from the Giants became clear by what they didn’t do in the offseason. By passing over the big-name veteran talent, they cast their lot with Perkins, a fourth-round pick in 2016.

“It told me they have faith in the guys that they have,” Perkins said. “I think they have a lot of confidence in us.”

Perkins finished with a modest 456 rushing yards in 2016, but his late-season improvement translated into more opportunities. In his final four games, he rushed for 271 yards and a 4.4 yards per carry average. It was enough to convince general manager Jerry Reese to stand pat at the position and hope that keeping the offensive line together and adding free agent tight end/fullback Rhett Ellison would make a difference in 2017.

“It was a quick ascension to the top, but it’s awesome, because I’m with a great group of guys,” said the 22-year-old Perkins. “We’re all very competitive, and just competing pushes me. I have a great offensive line, great guys, so they make my job easy.”

Giants fans might argue the point about having a great offensive line, but Perkins isn’t kidding when he says he believes in his guys up front. Adding to his confidence is that he has had a full offseason to become more acclimated to the team; as a rookie last year, he attended only two mini-camps before training camp. It was a whirlwind indoctrination that impeded his early-season progress.

“It’s definitely been beneficial to be here more in the offseason, because I know what to expect and how to play for training camp and the season,” he said. “I’m empathetic with the guys coming in now trying to grasp the offense or defense and getting everything thrown at them a million miles an hour. It’s a work in progress, and I feel like I continue to get better every practice.”

The Giants are hopeful the improvement will carry over into the regular season, because they’ll need more balance on offense than last year, when the running game sputtered and put more pressure on Eli Manning. After throwing 35 touchdown passes and 14 interceptions in 2015, Manning had 26 touchdown throws and 16 interceptions last season.

Forget the big names. Now it’s time for Perkins to make his own name.