Sam Darnold talks to the media on day 1 of Jets rookie minicamp at the Atlantic Health Training Center on May 4, 2018 Credit: David L. Pokress

You won’t get a lot of edginess or charisma from Sam Darnold, who is as meat-and-potatoes as they come for a 20-year-old quarterback now thrust into the New York media spotlight.

Joe Namath managed to pull off the rare feat of owning New York in every way — with his play and with his share of off-field controversy. But that was half a century ago. Even Namath has said he wouldn’t be able to get away with some of the things he pulled off back in his day, and that the media scrutiny would have made him tone down his famously active nightlife. 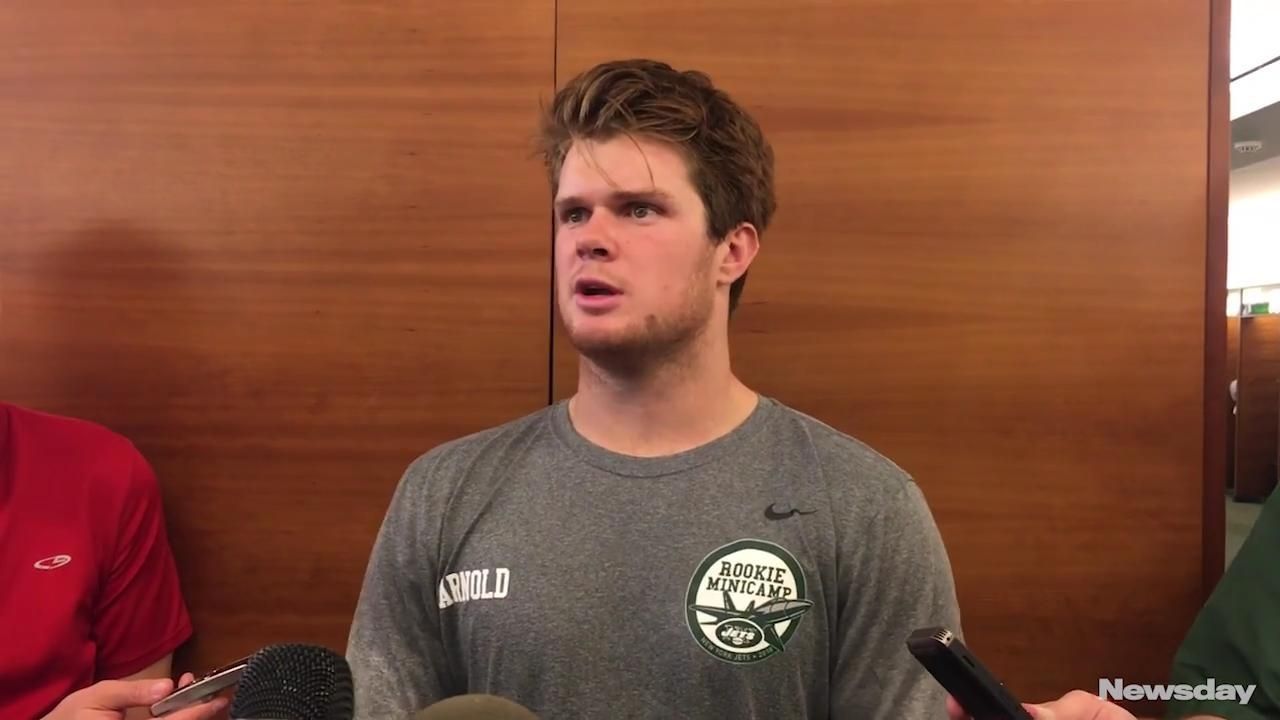 Jets rookie QB Darnold ready to earn respect Sam Darnold, the No. 3 draft pick of the Jets, talks on the first day of Jets rookie minicamp on May 4, 2018, about how he plans to handle himself now and during his first season in the NFL. (Newsday/Calvin Watkins) Credit: Calvin Watkins/Newsday

Today’s Jets are far better off with a gym rat in Darnold. He seems to understand the pitfalls of succumbing to the temptations the New York market might offer and is ready to dive into the herculean task of making the Jets relevant again. And maybe, just maybe becoming the first player since Namath to lead the Jets to the promised land of a Super Bowl championship.

Darnold may not be steeped in the ways of the New York market, a potentially daunting place for any athlete in any sport. But having played in the crucible of the nation’s second-largest market, he is at least used to living in a fishbowl and understanding that how he carries himself will be almost as important as throwing touchdown passes.

“I was in LA for a few years, so I’ve seen a lot there,” said the former USC star, who participated in his first on-field action Friday in the Jets’ rookie minicamp. It was a shaky debut, with three fumbled snaps, albeit with a center (Frank Sutton Jr.) who won’t make the team.

Coach Todd Bowles was undeterred by the turnovers and produced a rare display of public emotion after practice. Asked how Darnold performed, Bowles pounded the podium at his news conference and proclaimed facetiously: “He was great! I want him to play right now!”

The answer about playing time, of course, won’t reveal itself for months.

“I’m pretty relaxed as it is,” he said. “I’m just going to continue to be myself in every setting, whether it’s this setting or whether it’s with the guys messing around.”

The Jets enjoyed a staggeringly positive dose of good fortune in the first round of last week’s NFL Draft, as the Browns staked their future on Oklahoma quarterback Baker Mayfield and the Giants eschewed the idea of selecting Eli Manning’s successor, instead taking Penn State running back Saquon Barkley. That left the Jets in position to take Darnold, who is considered the most reliable of this year’s quarterbacks in terms of potential.

Now Darnold will attempt to justify their faith by doing all he can to be the franchise quarterback they envision. He is a worker bee who will spend countless hours on the practice field, in the weight room and in the classroom to become the best possible quarterback, and there is genuine optimism around here that the Jets finally have found a quarterback they can build around.

Those are some weighty expectations, and Darnold is beginning to understand how decades of frustration have worn on this franchise. But the scenario does not seem daunting to Darnold, who at 20 still is too young to order an alcoholic beverage.

“I love spending time in here and being able to get as much information as I can, because I’m coming in here and don’t know anything,” he said. “Some of these guys in here, some of the receivers, the linemen, they’ve been here for four or five years, some of them more than that. I’m behind schedule, so I need to get on the same page with everyone and understand the playbook as fast as possible.”

Darnold will have the benefit of being tutored by veteran quarterback Josh McCown, who is only too willing to share his expertise at every level. He understands that Darnold represents this team’s future.

“I’m going to try to learn as much as I can from [McCown],” Darnold said. “He’s seen a lot of football, been in a lot of locker rooms, which helps him out in terms of understanding what we need to do and what not to do.”

McCown likely will go into the season as the starter — a perfectly reasonable scenario because Darnold has plenty of catching up to do — but there is every expectation that Darnold will take over in the not-too-distant future.

He has the luxury of time. There’s no reason to rush the process and play Darnold before he’s ready. The Jets will know when that day is here, and the transition no doubt will be a logical one.

Until then, there is work to be done. And a lot of it.

“I embrace it,” Darnold said of the expectations. “But I understand every single day that it’s a process. You have to come in here and earn your stripes. I’m a rookie, and I understand that. But at the same time, I know I’m a quarterback and I have to be a leader on and off the field.”

Day 1 on job for Jets No. 1 pick DarnoldSam Darnold's day started around 6:45 a.m. when a shuttle bus got him to the Jets' practice facility for his first day of work.