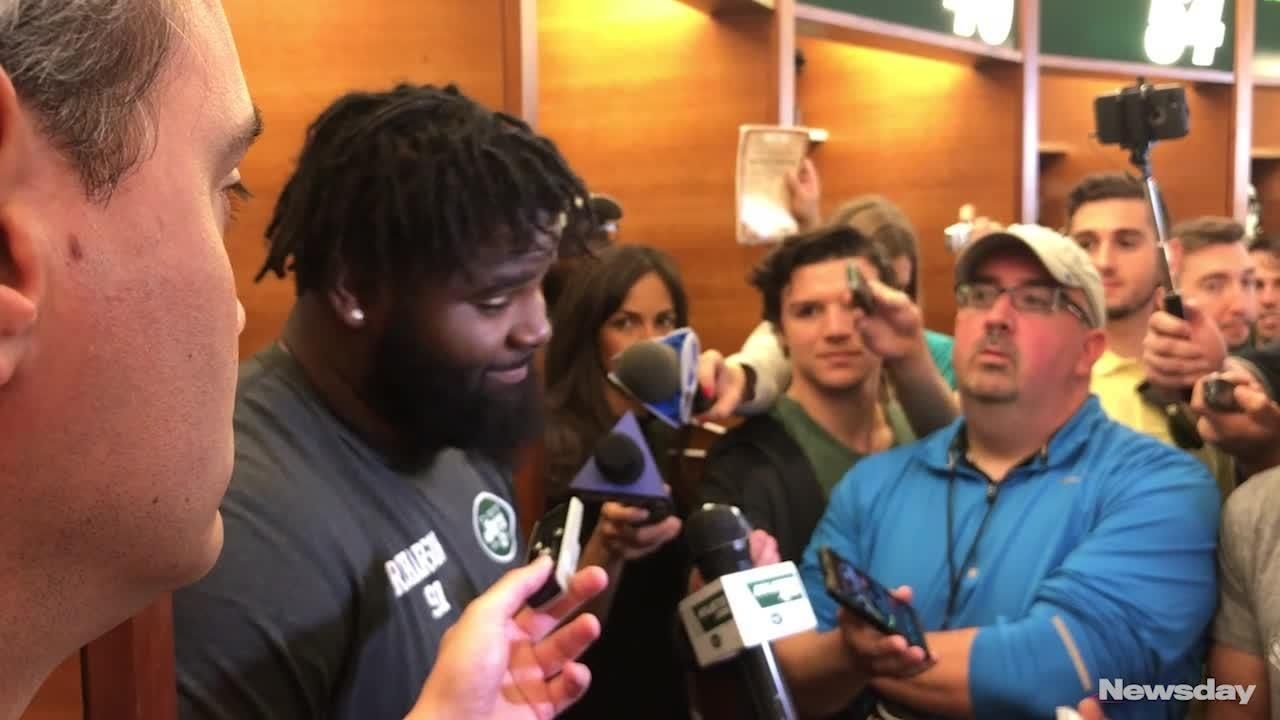 Jets defensive end Sheldon Richardson answered questions about his future with the team during organized team activities on Tuesday, May 23, 2017, at the team's facility on Florham Park, N.J. Credit: Newsday / Kimberley A. Martin

FLORHAM PARK, N.J. — The Jets have gone to great lengths to create a different vibe in the locker room with a sweeping offseason roster reconstruction. Sheldon Richardson offered a reminder Tuesday that the slate hasn’t been wiped entirely clean.

The fifth-year defensive tackle, who once looked as if he’d be a consistent Pro Bowl player but whose career has been marred by off-field problems and unrealized on-field potential, lit up former teammate Brandon Marshall and proved yet again that he may continue to be a part of the problem the Jets have worked so diligently to correct.

In speaking for the first time since the end of an awful 5-11 season, one in which Richardson played poorly, was disciplined for being late to a team meeting, and posted an obscenity-laced Snapchat video just minutes before a game, Richardson took a gratuitous shot at Marshall. After saying that “the locker room is a whole lot easier to get along with now,” Richardson was asked why.

It’s no accident he used that number; it’s the same number as Marshall’s jersey.

Marshall now wears the same number for the Giants, a Super Bowl-caliber team that saw fit to make him a crucial part of their offense by signing him to a two-year deal. Richardson, meanwhile, is only with the Jets because they couldn’t find a suitor in the offseason willing to agree to terms on a trade. The Jets had shopped Richardson in the weeks before this year’s draft, and also looked to deal him at last year’s trading deadline.

The Jets appear willing to keep Richardson for now, although it’s highly unlikely he will be with them beyond this season; with an $8.07-million salary in 2017, there has been zero talk of a contract extension. Barring a monster season similar to the one he had in 2014, when he was selected to his one and only Pro Bowl, the Jets likely will have no interest in investing more money into him. Not after they decided to dispense with a bunch of aging veterans and rebuild through the draft, and especially not with a player they inherited from the John Idzik-Rex Ryan regime.

Richardson and Marshall had a few dustups last season, once when the Jets suffered a 24-3 soul-crushing loss to the Chiefs in Week 3, when Ryan Fitzpatrick threw six interceptions and again after Marshall publicly rebuked Richardson for his vulgar Snapchat video made before a 34-13 loss to the Dolphins on Dec. 17.

But Richardson is hardly one to throw shade at a teammate, current or former, especially given his tenuous standing with the Jets. He already has been suspended four games for violating the NFL’s substance-abuse policy, and was suspended for the first game of the 2016 season for violating the league’s personal-conduct policy. Last year’s sanction was in response to a July, 2015 arrest for driving his 2014 Bentley Flying Spur at speeds up to 143 miles per hour near his home in suburban St. Louis. Police found a loaded semi-automatic handgun under a floor mat.

Throw in a first-quarter benching Nov. 7 for missing a team meeting, and you see that Richardson was the much bigger problem than Marshall as last season completely unraveled. That’s not to say Marshall was a quintessential locker room guy, and his problems in previous stops in Denver, Miami and Chicago were brought up as evidence he still has issues interacting with some teammates. But I would argue that Marshall was one of the better locker room influences on a team that needed more strong leaders last season. The fact that the Jets initially discussed the idea of extending his contract before deciding to release him is ample evidence that they viewed him as part of the solution, not part of the problem.

Richardson was an entirely different story, and the Jets’ frequent attempts to trade him tell you all you need to know. His shot at Marshall on Tuesday is further evidence that Richardson will continue to be a distraction on a team that needs a fresh start in every way.

So instead of revisiting an old feud with an ex-teammate, Richardson ought to worry about himself and his new teammates.