Igor Shesterkin of the New York Rangers makes a second period save against the New Jersey Devils at Madison Square Garden on Jan. 9, 2020. Credit: Jim McIsaac

Things were going to come to a head sooner or later with the Rangers’ goaltender situation. And with the recall this week of Igor Shesterkin from the minor leagues, it appears the time is now for the club to figure out what it is going to do about it.

Essentially, the Rangers have three goaltenders they believe in: Henrik Lundqvist, the face of the franchise for the last 15 years; Shesterkin, the 24-year-old Russian they drafted in 2014 to be the heir apparent to Lundqvist, and Alexandar Georgiev, the 23-year-old Russian (who was born in Bulgaria) who signed with the team after a tryout in 2017 and who has played well enough in his three years in the organization to force himself into the picture.

Carrying three goalies creates an uncomfortable situation for everyone (except for Shesterkin, who would certainly rather be with the Rangers than in the minors). Not only does it complicate the decision of who should start each game, but there is the matter of making sure each goalie gets enough work in practice — where there are only two nets on the ice – and enough games to stay sharp. It’s a challenge for coach David Quinn to find the right balance between doing what’s best for the team and what’s best for each goaltender. 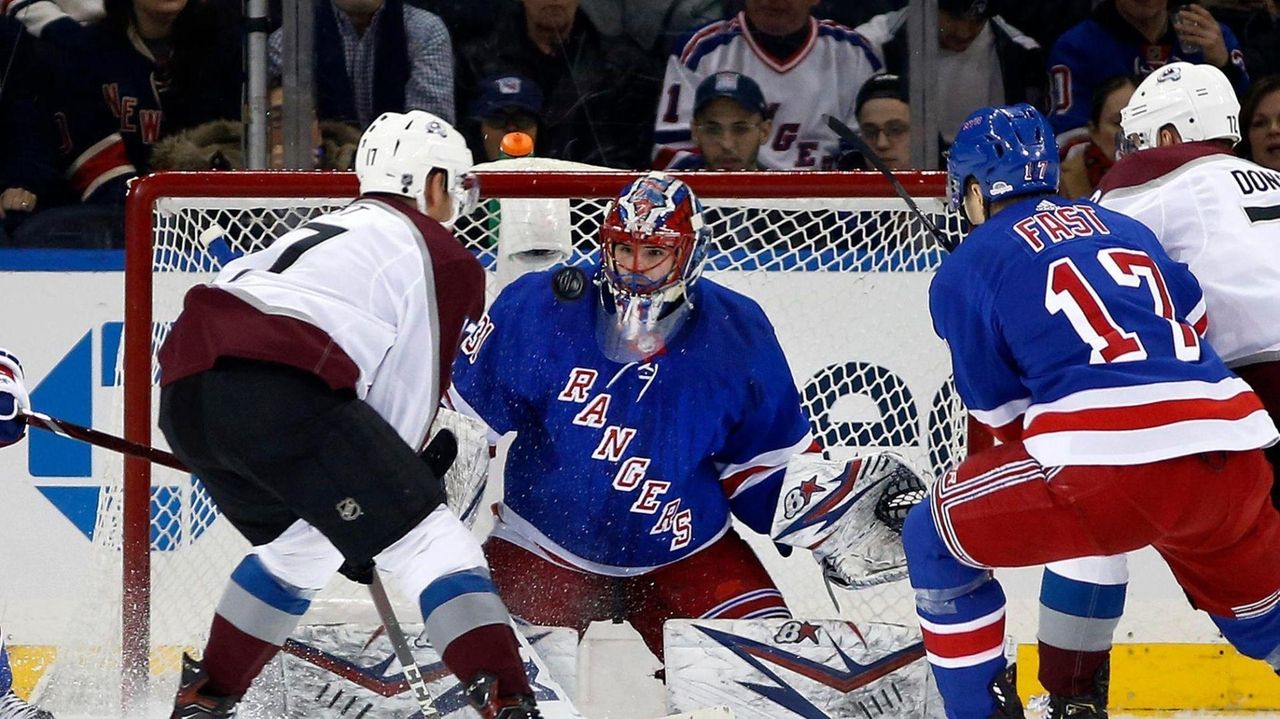 “We’ve got three really good goalies,’’ Quinn said at Friday’s practice. “That’s a better problem to have than having no good goalies.’’

Shesterkin has forced the Rangers’ hand. After putting up eye-popping numbers in Russia’s KHL, Shesterkin came over to North America this season, and the Rangers stashed him with their AHL Hartford team to start the season. But Shesterkin adapted to the smaller North American rinks and the faster game quickly, and he was spectacular in Hartford, earning AHL Goaltender of the Month honors in October and a spot in the AHL All-Star game this month.

As with many European players, Shesterkin has a European Assignment Clause in his contract, meaning he could opt to go back to Russia if the Rangers didn’t have him in New York. So, after 41 games — the exact midpoint of their season — the Rangers called him up from Hartford for a look-see.

So far, he looks pretty good, having started two games during the week, winning them both, and stopping 75 of 81 shots (.926 save percentage), including 46 of 49 in Thursday’s 6-3 win over the Devils.

He got the night off Saturday, as Lundqvist started against the Stanley Cup champion Blues in St. Louis, with Georgiev backing him up.

Quinn has said how the goaltenders are rotated will be a day-to-day decision, but how long can the Rangers realistically go with three goaltenders? Can they do it up until the Feb. 24 trade deadline?

Georgiev is the more likely to be moved. Having played more than 60 career NHL games (he’s played 63), he cannot be sent to the minor leagues without clearing waivers, and there’s no way the Rangers would ever expose him to waivers. That means he’s here for the forseeable future, at least unless and until the Rangers are able to trade him. There are teams around the league that could use a goaltender, but with the Rangers in the situation they’re in, teams might play hardball in what they would offer for Georgiev. Shesterkin could be returned to Hartford, but that would be a short-term solution, and wouldn’t address the conundrum in the long term.

Lundqvist, who turns 38 on March 2, is under contract for one more season after this one, and it would be amazing if the Rangers could keep both Georgiev and Shesterkin and have them going forward after Lundqvist is gone. But that seems like a pipe dream. More likely, the Rangers are going to have to move one of their two young goalies — and then watch them develop and play for someone else over the next 10-plus years.

Kakko trying to learn from his mistakes

Kaapo Kakko still has so much to learn about the NHL game. And Quinn is determined to teach him.

Kakko had an assist and scored a goal against the Calgary Flames on the Rangers’ Western Canada trip, but Quinn benched the 18-year-old rookie at the end of that game after he took a penalty midway through the third period.

“I think I played well, but… yeah, it was a stupid penalty,’’ Kakko said of the benching. “I think (the call) was a little bit soft, but, yeah, it was a penalty in the offensive zone. You can’t take penalties there.’’

Kakko was asked if he was confused by, upset with, or OK with his benching.

“Of course, I didn’t like that at the time, just sitting and watch when everyone else is on the ice,’’ he said. “Of course, it’s not fun. But that’s hockey.’’