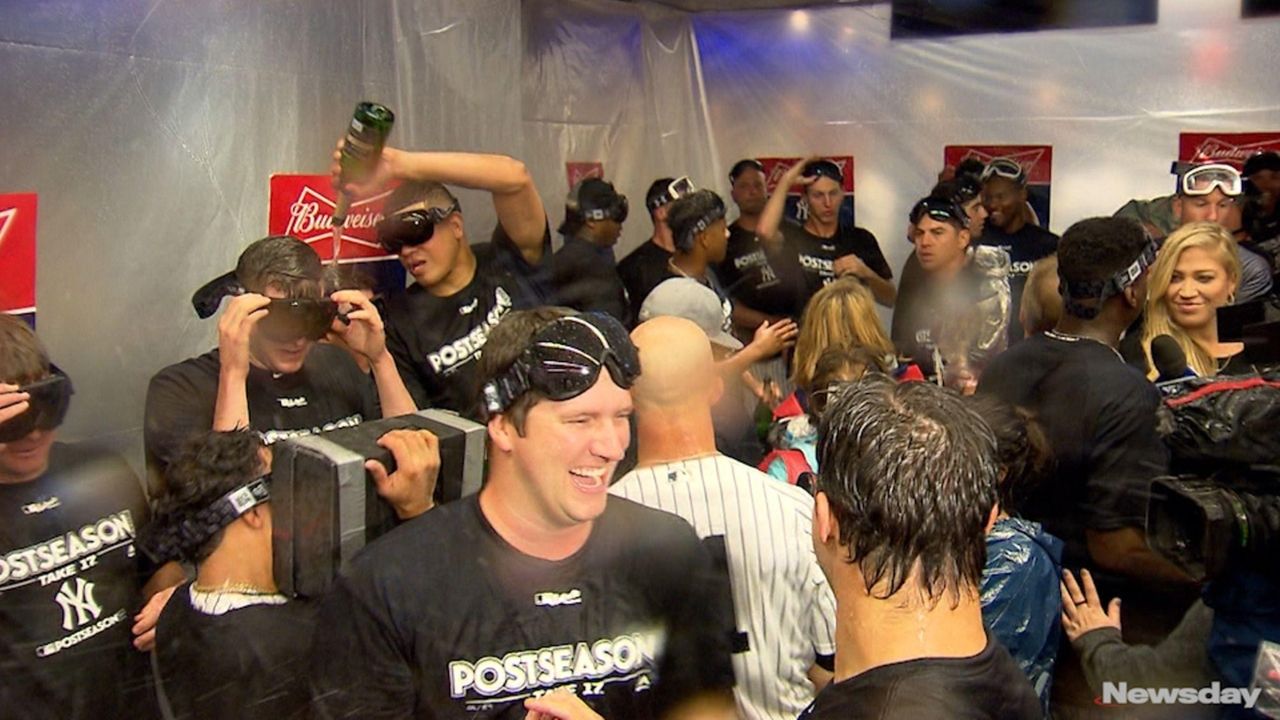 After Luis Severino was pulled in the first inning, the Yankees' bullpen saved the team in the AL wild-card game against the Twins on Oct. 5, 2017. They pitched 8 2/3 innings, and boosted by home runs by Didi Gregorius, Aaron Judge and Brett Gardner, the Yankees won, 8-4, to advance to the ALDS against the Indians. Credit: News 12 Long Island

Heading into October, it was only natural to wonder if the playoff stage might be too big for Aaron Judge, a rookie facing enormous pressure to duplicate what he did during a 52-homer regular season.

What we discovered Tuesday night, however, was just the opposite. Judge, a 6-7 masher with a baseball IQ to match, tends to rise to the occasion. The greater the challenge, the higher the stakes, the more Judge relishes the spotlight.

A few hours after Brian Cashman drew similarities between the makeup of his hulking rightfielder and Derek Jeter, the former Yankees’ captain, Judge proved the general manager spot-on with that assessment. Amid “MVP” chants heard early and often, Judge walloped a two-run homer off the Twins’ Jose Berrios in the fourth inning, scored three runs himself and reached base twice more in the 8-4 victory that sent the Yankees to a Division Series clash with the Indians.

Judge knew coming in that October is when Yankees have to shine. While Judge is the slam-dunk Rookie of the Year for the American League, and has a decent shot at MVP, his regular-season resume no longer mattered come Tuesday.

So Judge went to work on his playoff one, becoming only the third Yankees rookie to hit a home run in his postseason debut, joining Shane Spencer (1998 ALDS) and Elston Howard (1955 World Series), according to the Elias Sports Bureau. Judge’s blast also was the first playoff homer by a Yankees rookie since Hideki Matsui in the 2003 World Series.

Judge spoke with admiration for the Yankees’ retired numbers on the mural behind the leftfield bleachers, and what they did in October to help put them there, hoping that he might do the same. So far, so good. But it’s Judge’s team-first attitude that prompted Cashman to connect him with Jeter.

“One thing Judge has always had is high leadership qualities in the minor leagues that were very similar to Derek Jeter’s qualities,” Cashman said before Tuesday’s game. “Clearly different players and you never want to compare him to a first-ballot Hall of Famer and owner. But on the makeup side, there are a lot of similarities there.”

That’s hard to debate after seeing Judge’s introduction to the playoffs, a place he seems as comfortable with as June or September. In his opening at-bat, with the Yankees trailing 3-0 in the first inning after Luis Severino’s nightmarish debut, Judge didn’t get anxious following Brett Gardner’s leadoff walk. It would have been easy for Judge to think big and overswing for the fences, but he settled down to work the count full, then poked a tough slider into centerfield for a single.

At his size, Judge can be dismissed at first glance as merely a power threat. But he’s developed into an intelligent hitter, with a disciplined eye, and that first-inning single to keep the Yankees’ rally moving was the perfect example.

“We talk a lot about his home runs because of how many he hit, and how far,” Girardi said. “But he’s a very smart player.”

“He’s back on track,“ Cashman said. “It’s as simple as that. He found his groove again and that’s a benefit to us.”

Judge still has a ways to go to catch Jeter, who played in 158 postseason games and collected five World Series rings, but Tuesday was a terrific start. And the Indians should consider themselves on notice. Containing Judge is now their problem — a very big one — beginning Thursday.