Todd Frazier and Greg Bird of the Yankees celebrate after defeating the Astros in Game 4 of the ALCS at Yankee Stadium on Oct. 17, 2017. Credit: Jim McIsaac

The Astros would have you believe this American League Championship Series is merely evened up, all square at two games apiece, after they melted like a snow cone on a July sidewalk Tuesday afternoon at the Stadium.

But the Yankees told us something entirely different with their 6-4 comeback victory, a win that transported everyone back to those dynasty nights, when we watched any number of relievers, from the Orioles to the A’s to the Rangers, cry for their mommies when pushed onto the Big Stage in the Bronx.

It wasn’t what the Yankees said afterward. Not the words they used. The message was delivered by scoring six unanswered runs, starting with Aaron Judge’s leadoff homer in the seventh — fittingly onto the Monument Park netting — off the previously impenetrable Astros starter, Lance McCullers. Jr.

Perhaps Judge woke up the echoes, and rattled those ghosts, because the methodical, assembly-line takedown that followed was straight from the pinstriped playbook of yesteryear. Once that Yankees’ machine sparked to life, along with the 48,804 fans providing the emotional fuel, it couldn’t be stopped. 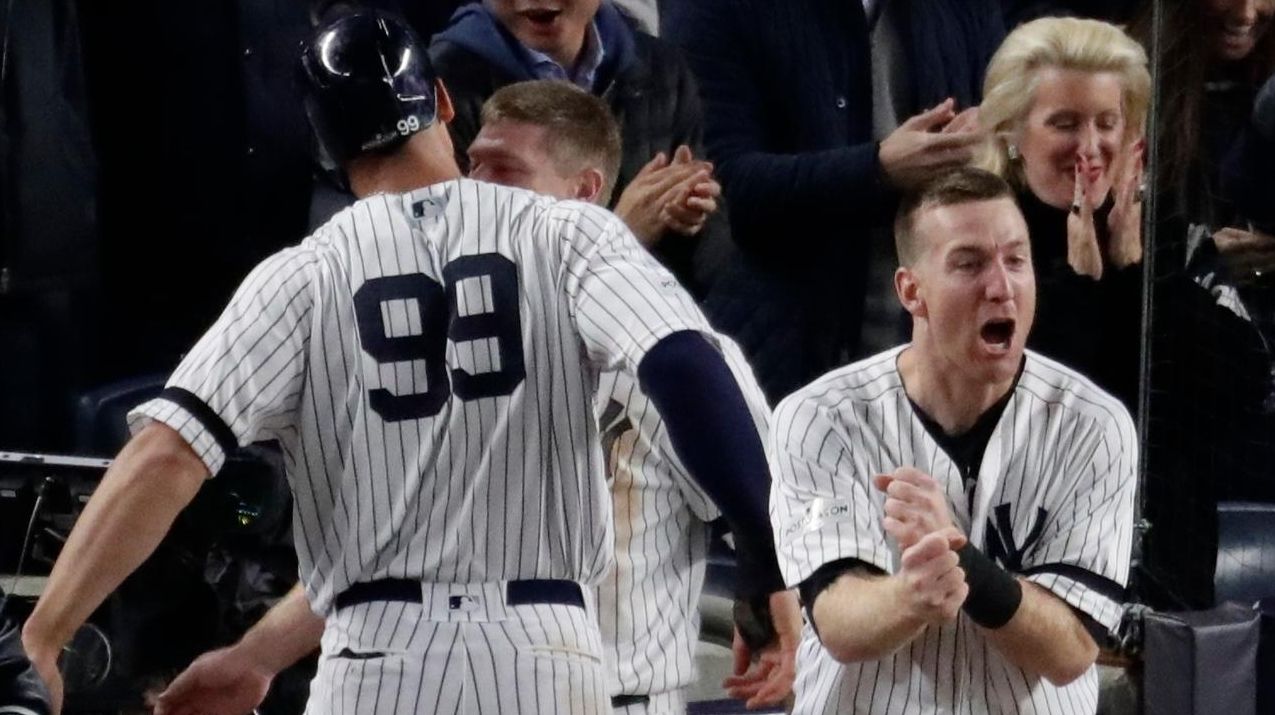 And as far as we’re concerned, it won’t be. Not now. The Yankees did more in Tuesday’s Game 4 than climb out of an 0-2 hole, tie up the series, and book a return trip to Houston.

To us, they won the series.

Technically, of course, it’s not over. They’re still two wins away from a trip to the World Series, which is likely to set up a 1981 rematch with the Dodgers. But after what we witnessed Tuesday — the Yankees taking the Astros’ best shot, then dismantling their skittish bullpen — they broke the AL West champs. Just as they did the top-seeded Indians before them. The Yankees’ momentum is rolling like a conductor-less D train, and they can feel the power. It’s a tangible thing.

“Why not?” Todd Frazier said. “After a game like today, I’d be lying if I said no. We’re resilient, and we understand what we’re capable of doing.”

The Yankees retired the “C” with Derek Jeter, but Frazier has been a worthy fill-in since his late July arrival, acting as spokesman and spiritual guru, helping to give this $200-million team some Jersey grit. He started the key eighth-inning rally with a leadoff single, then fired up his teammates from the basepaths, hollering for more as the Yankees sent 10 batters to the plate and scored four runs to take the 6-4 lead.

Frazier also enjoyed the view from third as Chase Headley — a late entry to pinch hit for Austin Romine — wiped out rounding first base on his line-drive single and had to scramble for second, his outstretched hand barely beating Jose Altuve’s tag on the headfirst slide.

No need to explain, Chase. Everyone in the building was right there with him, glued to each step, willing him to get to that bag. Astros manager A.J. Hinch challenged, but as soon as the umpires confirmed Headley was indeed safe — by a few inches — the party was on. The big blow, as usual, was provided by Judge, who battled closer Ken Giles through three straight sliders, fouled off a 100-mph fastball, then reached down for the next 86-mph slider, hooking it off the leftfield wall for the tying RBI double.

Given his national rock-star profile, no one in pinstripes has faced more scrutiny during his October struggles than Judge. But to rebound to beat Giles in that two-strike spot was a testament to his mental toughness, and a reflection of what lies at the core of these Yankees.

“Sometimes I feel like we like playing with our backs against the wall,” Judge said. “It’s crazy. But we’re a team that keeps fighting until it’s the last out.”

All that remained was a bit of redemption for Gary Sanchez, who was relegated to DH duty Tuesday as Joe Girardi said he went with defense for Game 4. So Sanchez followed up his seventh-inning sacrifice fly with a laser-shot, two-run double off Giles that created bedlam in the Bronx.

The Yankees still have to tackle Dallas Keuchel and Justin Verlander. But even those two are not enough to prevent what now seems inevitable.