Marcus Stroman isn’t for everyone. His emotional mound displays have annoyed opposing teams — not that he cares — and Stroman has swatted away haters through his very active social-media accounts.

On Thursday, when someone brought up last season’s COVID-19 opt-out, Stroman preempted further questions related to that topic with "I won’t be addressing any more comments about the past."

Duly noted. But here’s the thing: Stroman very well could be the right guy for the Mets at the right time, and we’re not just talking about the statistical side of his game.

The 2021 Mets are a team looking to finally crash the postseason party, to upend the National League East, to silence the mocking crowds that made them a punchline for the majority of the Wilpon Era. With a new owner/fan in multibillionaire Steve Cohen, these rebranded Mets have something to prove, and Stroman — author of the "Height Doesn’t Measure Heart" campaign — exudes that mantra from every pore. 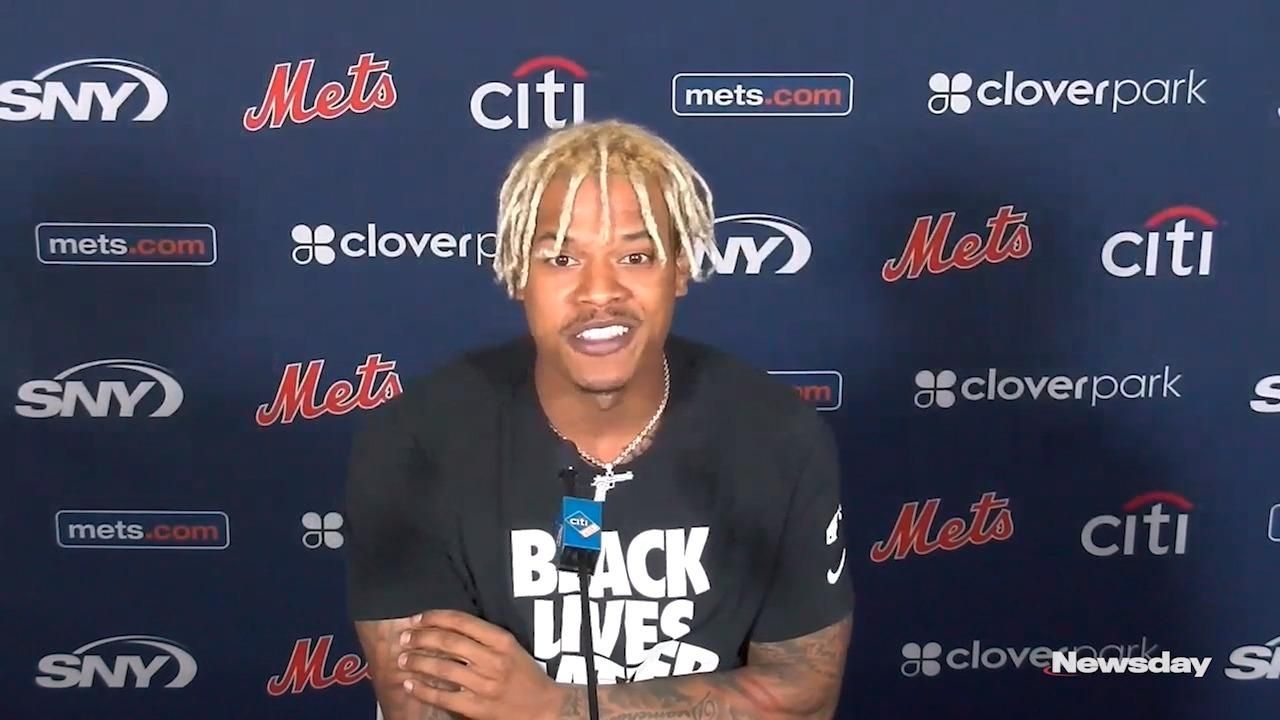 Mets' Stroman: 'I'm 5-7 ... there's no room to miss for me' Mets righthander and Medford-raised Marcus Stroman talks about his mental and physical preparation at spring training on Feb. 18, 2021, as he returns after opting out of the 2020 season.

"My dad, from a young age, always taught me to have a chip on my shoulder and be the most confident guy in the room," Stroman said Thursday. "And that’s going to stay. That’s going to stick with me forever regardless of what anybody says, ever."

Stroman’s father, Earl, was a fixture at games during his son’s development as a Patchogue-Medford star. These days, Stroman puts himself out there in a way that few major-leaguers do in a sport that traditionally has leaned more toward staying within the lines, as governed by an invisible book of unwritten rules.

It’s a risky place to operate, but Stroman can’t sit still, and him bouncing around camp like a loose molecule — part-pitcher, part-hype man — is the sort of extra energy needed to boost an up-and-coming club.

"As a team, when you don’t lack confidence, a lot of great things can happen," manager Luis Rojas said. "The best version of you can come out."

Rojas got to that point after relating a few early observations of Stroman this week at the Mets’ spring training facility. Whether it was chatting up Noah Syndergaard during the pitchers’ stretch, fielding grounders at shortstop or just studying Jacob deGrom’s bullpen session, Stroman’s total immersion after a half-season away was appreciated by Rojas.

And if some of Stroman’s bold philosophy can provide more of an edge to this group as it establishes an identity over the next six weeks, the lower-key Rojas welcomes that input.

"I don’t want to say he sets standards," he said. "But he expects greatness from himself. He’s got that self-drive."

That statement only scratches the surface with Stroman, who spent his 12 minutes on Thursday’s Zoom call detailing that commitment, from the workout sessions with his personal trainer, Nikki Huffman, to recoveries in his hyperbaric chamber.

To watch Stroman on the mound is to understand his level of fitness — "elite" is a word he uses often — as he varies his delivery, from pausing mid-motion, leg high, to an exaggerated backward, Luis Tiant-like twist.

Personally, Stroman has plenty riding on this season. Opting out last year — even for health reasons — places additional pressure on his return. There’s no escaping that. And after accepting the $18.9 million qualifying offer rather than trying free agency, Stroman again is entering a walk year, which basically amounts to an audition for players in his position despite the track record.

But Stroman refuses to entertain those narratives. And in doing so, he doubled down on himself Thursday by pledging 200-plus innings this season, a benchmark that only a dozen or so pitchers reach, partly because of the emphasis on workload management in the game today.

If Stroman can get there, pitching in the middle of the Mets’ rotation, that’s a tremendous plus for their playoff aspirations. And if people doubt his ability to do it, in his mind, that’s all the better.

"I’m excited to go out there and perform because there’s this huge stigma that I was terrible in my 11 starts [for the Mets in ’19] with a 3.70 [actually 3.77 ERA]," Stroman said. "I just kind of laugh at that. I know what I’m going to put in this year going forward."

The Mets are banking on that chip sitting on his shoulder, just as Rojas is hoping the oversized vibe from Stroman’s 5-7 frame has enough wattage to help charge an entire clubhouse.

There are other big personalities among this group — Syndergaard, Pete Alonso, Dominic Smith, the newly acquired Francisco Lindor, to name a few — but Stroman supplies an edge that could be especially valuable in what could be a breakthrough season for this franchise.

"I think we’re unbelievable," Stroman said. "I’m not throwing out anything because I know it’s gonna be headlines tomorrow — Stroman thinks this, this and this. But I speak highly of our guys for a reason."

And with Stroman all-in for this year, he’s shaping up to be one of those reasons.

After missing 2020 because of COVID concerns, Stroman is backThe former Patchogue-Medford star boosts a Mets rotation that had problems last season, prompting Luis Rojas to call his return 'huge.'

Hofstra men's hoops ousted from CAA Tournament by Elon
LI's Sterling responds to critics after his UFC championship victory
Lennon: Stanton looks great; now, can he stay healthy?
Mets' Martinez out four months after colliding with umpire
Jets place franchise tag on Marcus Maye ahead of deadline
Griffin brings depth to the Nets' frontcourt
Didn’t find what you were looking for?