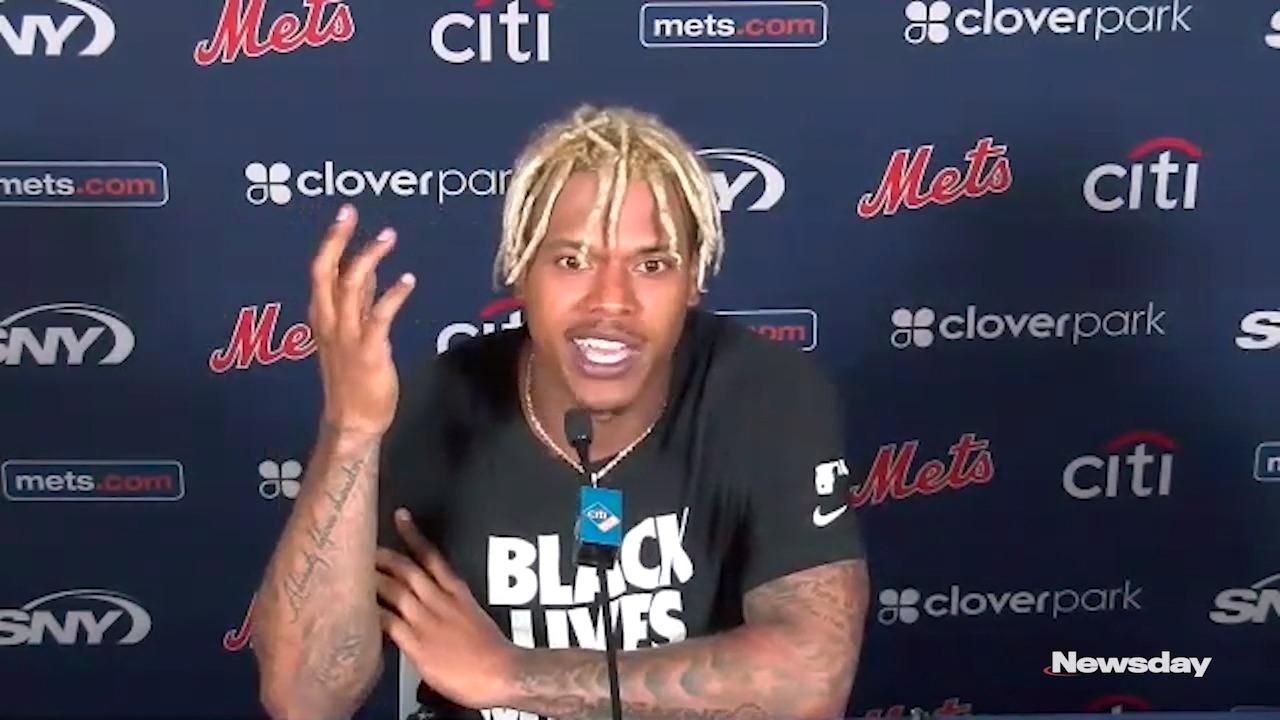 PORT ST. LUCIE, Fla. -- Always another wrinkle, another twist, another angle. Marcus Stroman’s mission to defy convention resumed Tuesday at Clover Park, where he took the mound, against an opposing team, for the first time since the pandemic shut down baseball a year ago.

And it wouldn’t be Stroman if he didn’t have something new to unveil. On this occasion, facing the Astros, Stroman raised the curtain on a split-finger changeup, a pitch he learned from Robert Gsellman last summer while the two rehabbed at the alternate site in Brooklyn.

More than eight months later, Stroman evidently couldn’t wait to try the new toy. He wasn’t scheduled to start Tuesday’s home opener for the Mets -- that was supposed to be Jordan Yamamoto, who threw later -- but Stroman asked manager Luis Rojas if he could get the turn rather than pitch another session of batting practice against his teammates.

Rojas relented, understanding Stroman’s impatience to ramp up the competition level, and he finally unboxed the split-change to Michael Brantley, who took a big cut and missed the 0-and-1 pitch as it dived toward the outside of the plate. Stroman figured he threw about a seven or eight overall, and seeing the Astros’ response -- especially from an accomplished, dangerous hitter like Brantley -- made him consider the experiment an immediate success.

"You never know until you throw it against hitters," said Stroman, who fired two scoreless innings, striking out two. "It can be filthy, it can feel nasty, it can feel like the best pitch ever. But until you actually get out there and throw it in a game and see how hitters react to it, I feel like you can't actually consider that pitch a weapon until you do so.

"That's why after throwing it today I feel like it's a weapon. It's the first time I used it against hitters and I had really good success. It felt pretty good. Had similar action on it every time. I'm sinker-slider. So anytime I can go off that it's just going to be another weapon that will help me out."

Stroman has worked to refine that arsenal over the years. The former Patchogue-Medford star has evolved into an unpredictable package of delivery motions, incorporating one or even multiple pauses before releasing the ball. He had a number of them on display Tuesday, including what appeared to be a quick-pitch delivery on a breaking ball to Aledmys Diaz in the first inning.

"That’s part of who he is," said new Mets catcher James McCann. "His whole purpose is to disrupt the timing of the hitters and he’s pretty intelligent with the times that he does use it. As far as I’m concerned, it’s one of those things where I’m ready at any point in time.

"I’m sure we’ll have conversations as we get deeper into spring training and throughout the season when he wants to use it or any time when I can specifically call it if I see something. But at the end of the day, I'm ready for whatever he’s going to bring at me and I’m going to let him be creative because that’s one of his strengths."

Stroman opted out last season due to COVID-19 concerns, so nobody has really faced him since 2019. The Mets weren’t even sure he’d be back in their uniform, but Stroman chose to forgo his first crack at free agency to accept the team’s $18.9-million qualifying offer to return. Adding the split-change is just another instance of Stroman’s constant efforts to upgrade.

"That’s my approach to life," Stroman said. "I’m always looking to learn and adapt through life. I feel like you can truly never accumulate enough knowledge. I feel like I’ll never be too stubborn to take in new information and I feel like that’s why I’m still in the league to this year, because of my ability to consistently adapt, to change, to tweak. I feel like a chameleon. I feel like I can kind of do anything and you could put me in any situation and I’m going to thrive."

Stroman’s adrenaline surge had to be spiking Tuesday, even for a Grapefruit debut. He usually throws one of his warm-up pitches from the backside of the mound, and his first of the day sailed over McCann to the screen. Stroman capped both Ks with a little skip-hop flourish, the second being a 10-pitch battle with Bryan De La Cruz, who finally took a called third strike to end the inning.

"Reminded me of a few at-bats I’ve had with [Dustin] Pedroia in my past," Stroman said. "Just kind of spoil, spoil, spoil. That’s what makes this game so fun, having those battles and getting to that point where you can kind of celebrate and let out at the end."

Everything about Tuesday seemed fun for Stroman. Fans back in the ballpark, the applause greeting him upon his return to the dugout, an encouraging test drive for a new pitch. After all that time away, both Stroman and the Mets should have a lot to look forward to.