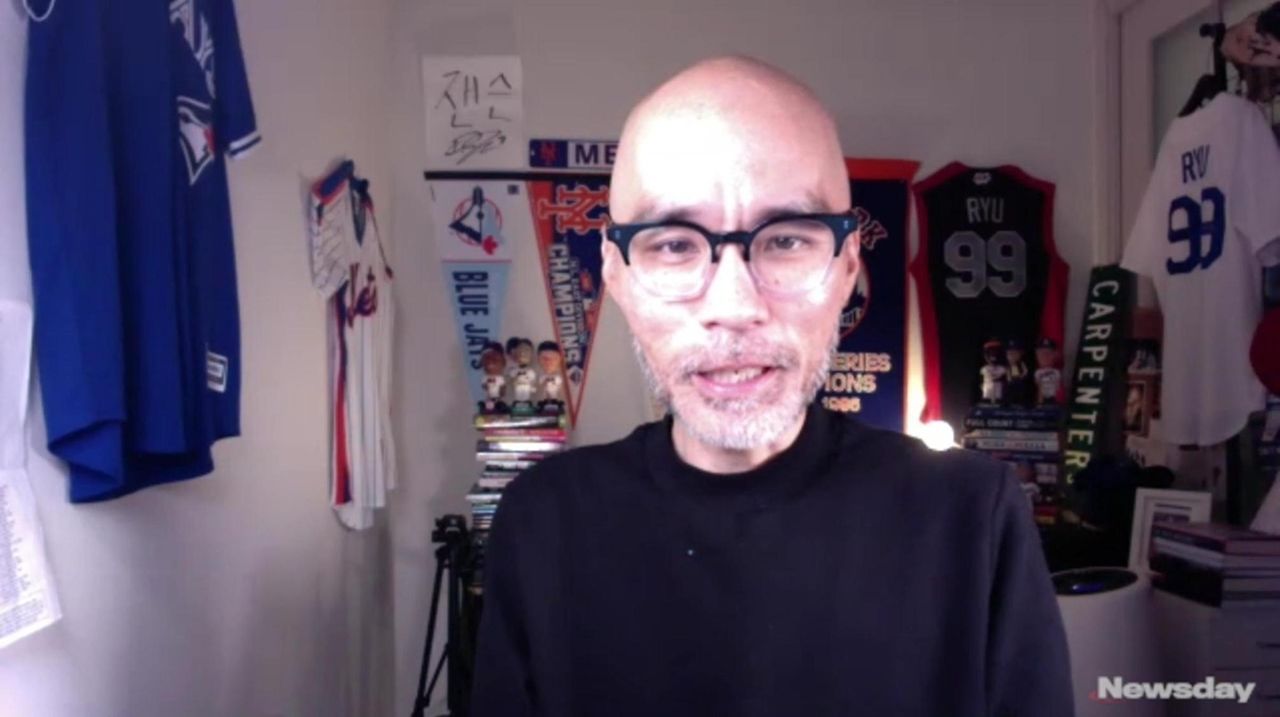 Newsday's David Lennon spoke with Daniel Kim, a former Mets interpreter and current baseball analyst for DKTV in Seoul, South Korea, on Saturday, April 12, 2020. The pair discussed what life is like in South Korea amid the coronavirus pandemic as the KBO, Korea's highest baseball league, is set to begin play later this month.  Credit: Newsday / David Lennon

In the midst of this coronavirus pandemic, South Korea is a baseball oasis. Not only are the KBO teams practicing together, with preseason games scheduled to begin April 21, but they also just staged their first national TV broadcast, an intrasquad scrimmage Friday night featuring the popular Lotte Giants.

And, of course, with no spectators in the stadium.

“I was kind of curious how things would be because it was almost like a real game,” said Daniel Kim, a baseball analyst for DKTV and transplanted New Yorker based in Seoul. “It was a regular-season setting with the real TV crew, real TV cameras, but without fans, and I got used to it.

“My first initial reaction was, OK, I could deal with this empty stadium. It was good to hear the normal baseball stadium sounds like batters being announced. Just the crack of the bat. And those things were a very huge relief.”

I’ve known Kim since his Mets days as the interpreter for Jae Seo, the Korean college star who often showed flashes of Flushing brilliance (3.85 ERA from 2002-05). Now Kim covers baseball on two continents, focusing on the KBO at home with an eye on the league’s former elite players in the States, such as the Blue Jays’ Hyun-Jin Ryu and newly signed Cardinals lefty Kwang Hyun Kim.

At the moment, however, the only games happening are in South Korea, and it could stay that way for a long while as the United States and Japan struggle to get a handle on the COVID-19 outbreak. But if you’re looking for reasons why the KBO is confident about an early May Opening Day, and even playing a full 144-game season, consider the nation’s rapid response to the virus threat followed by strict vigilance in stopping the spread.

It’s widely known that the United States and South Korea reported their first case of COVID-19 on the same day, back on Jan. 20. But that’s where the similarities ended, and the two countries are in much different places today, as South Korea’s aggressive testing and monitoring programs have flattened the curve to the point of having fewer than 40 new cases during each of the past few days (out of a population of 51 million).

As of Saturday, South Korea had more than 10,000 reported cases but just over 200 deaths  — a mere fraction of New York State’s tally alone — and according to Kim, the country is slowly reopening, with restaurants, shops and office buildings stirring again. To gain entry into many of these places, however, your temperature is checked by sensors at the door and a mask is mandatory. Hand sanitizer also is expected to be used at the doorway.

“It appears that things are under control for now,” Kim said. “But at the same time, a second wave could happen any time so people are still not really gathering. I think if you go to the malls or cafes, there are some people, but not as much as a normal April weekend afternoon. So life is slowly, gradually becoming a little bit normal, but it's not fully back yet. I would say about 50 percent back in terms of the traffic, and the people on the streets.”

Baseball is mirroring society in that regard. Everyone who enters the stadium, from team personnel to media members, has their temperature read by forehead scanners. Kim said that players even have it checked periodically during their workouts, and as a reminder to show just how fragile this baseball ecosystem is, a minor-leaguer drew suspicion Saturday when he showed up with signs of a fever.

“They shut down the facility, they sent everybody home,” Kim said. “We’re hopeful. I think [the season] is going to happen. But we're not out of the woods yet, and if there's one positive case, whether from a team player or a team official, it's gonna throw everything off. So we're just waiting and praying that nothing's going to happen before [April] 21st.”

Kim also mentioned that the KBO already had a literal playbook for this crisis after the MERS outbreak in 2015, so there were some guidelines in place. The KBO doesn’t anticipate any radical changes on the field — such as closing the dugouts or wearing masks, as MLB has suggested — but they could go to one neutral site for the playoffs, the league’s only domed ballpark, located in Seoul, if the schedule gets postponed further.

The calamity here in the United States has forced MLB to consider some wildly out-of-the-box concepts. From staging a truncated season within the confines of the Greater Phoenix area to even splitting the schedule with Florida and dividing the 30 teams by spring-training geography. Whatever the strategy, any sport’s success ultimately boils down to containing the virus, and that requires a smart public-health policy functioning at a very high level.

“Right now, if I feel that I wanted to get tested, I could just walk out right now and get tested,” Kim said. “Testing is available pretty much 24/7 to everyone. Whether it’s because you feel sick or you want to feel secure that you're healthy.”

Advances in testing, and eventually a vaccine, are essential to restoring the full sports landscape, be it in South Korea or the States. But in the meantime, it’s extremely cautious baby steps, and Kim says the KBO is even hopeful to get fans back in the ballparks this season.

“The plan is to start the season without fans,” Kim said. “There also was talk by the [KBO] commissioner's office that they can gradually bring the fans in, like 10 percent capacity, 20 percent capacity. It'll still be empty. But I think it's a meaningful gesture to have, whether it's 100 fans or a thousand fans. I think that's very symbolic.”