Yankees leftfielder Brett Gardner (11) in the dugout in the ninth inning in Game 4 of the ALCS against the Houston Astros on Thursday, Oct. 17, 2019, at Yankee Stadium. . Credit: Newsday/J. Conrad Williams Jr.

Could elimination really feel any worse?

Seriously, what happened Thursday night in the Bronx?

Already backed against the proverbial wall, the Yankees saved one of their worst performances in recent memory for Game 4 of the ALCS. They did everything but wave goodbye for the winter to the remaining stragglers who littered the Stadium after a demoralizing 8-3 loss to the Astros that was shocking in its totality.

No wonder Aaron Boone called a clubhouse meeting immediately after the Yankees dropped into a 3-1 hole that in truth felt bottomless. 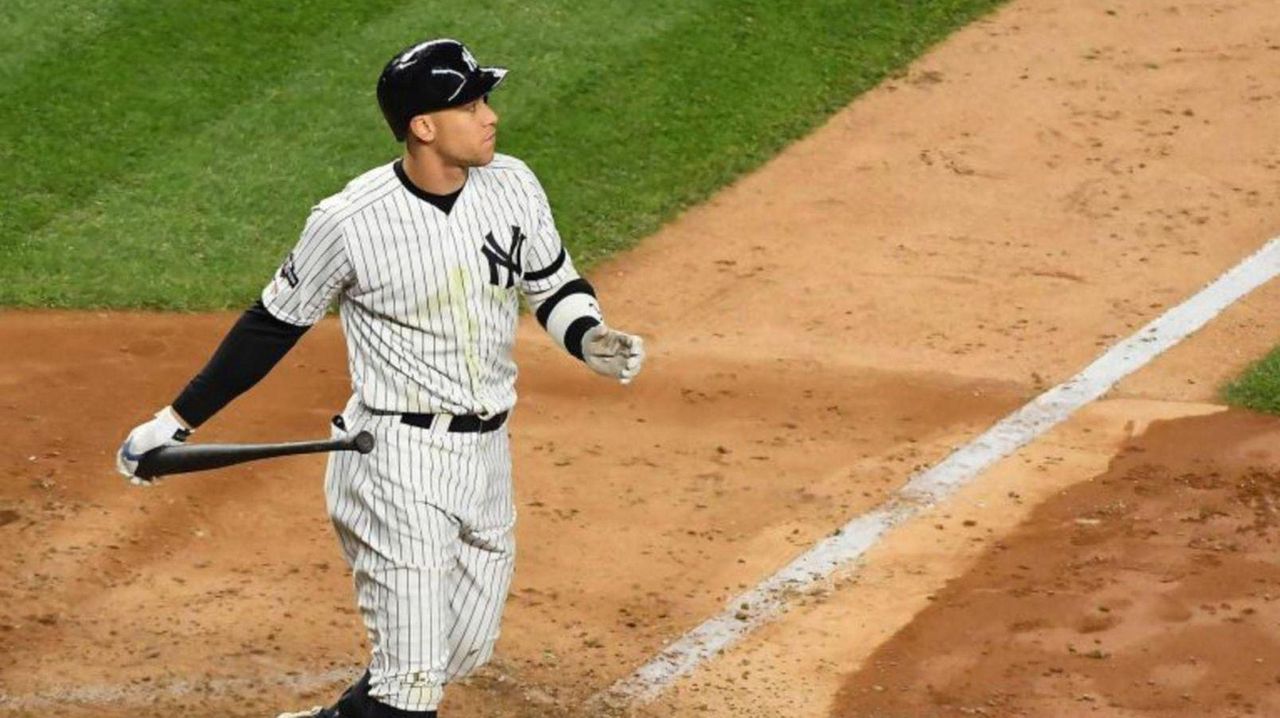 Looking ahead to ALCS Game 5 and facing Verlander To extend the season, the Yankees will have to beat Houston’s 21-game winner Justin Verlander in Game 5 on Friday night at Yankee Stadium. David Lennon, Newsday’s baseball columnist, looks ahead to the next matchup. Credit: Newsday

The manager should have started by asking his players if they felt like showing up Friday to face Justin Verlander in Game 5 or just calling it a season.

Because this was an epic fail by the Yankees, an across-the-board meltdown in a must-win game that seemed completely out of character for everything they had accomplished up to that point. Aside from the pinstripes, this group was unrecognizable.

“We played poorly,” Boone said. “There’s no other way to explain it. And we need to flush this immediately.”

It already seems too late, and after so many blown chances in Games 2 and 3, the Yankees didn’t look as if they deserved to be on the same field as the Astros in Thursday night’s debacle.

They left the bases loaded twice, stranded 10 and went 0-for-7 with runners in scoring position. The Yankees’ four errors — including two by defensive standout DJ LeMahieu — were their most in a postseason game since they made five in the 1976 ALCS.

Masahiro Tanaka and Chad Green — two of the most infallible pitchers on the roster — gave up matching three-run homers to George Springer and Carlos Correa, respectively. Tanaka, whose postseason 1.32 ERA entering Thursday was second only to Sandy Koufax, allowed more than two earned runs for the first time in his postseason career.

Stunning, really. In the postgame clubhouse, the video boards displayed a report time for Friday and what to wear — TRAVEL ATTIRE: TRACK SUITS. It was done with the expectation that the Yankees would force a weekend trip to Houston for Games 6 and 7. After the way they played Thursday, though, that seems unlikely against an Astros team that outclassed them in Game 4.

“I think we have a resilient group,” LeMahieu said. “We’ve shown that all year no matter what was thrown at us. I know we’re going to give them everything we’ve got.”

Problem is, the Yankees have been giving away this whole ALCS, mostly since the final out of their 7-0 victory in Game 1. Over the next three losses, the Yankees are batting .155 (16-for-103) with 32 strikeouts and hitting .063 (1-for-16) with runners in scoring position.

With the Yankees’ offensive blackout, Tanaka had to be nearly perfect again and wasn’t. Springer’s home run was only the second homer he’s allowed in seven postseason starts. He also surrendered more than two earned runs for the first time in his playoff career.

“As far as stuff, I think there wasn’t much difference to it,” Tanaka said through his interpreter. “That splitter just got too much of the plate. It was supposed to be much lower than that, obviously.”

Adding to the face-palm feel of the night was Gary Sanchez, who struck out on three pitches to leave the bases loaded in the first inning but later crushed a two-run homer, his first extra-base hit of this October. It wound up being of the too-little, too-late variety.

Of course there was Adam Ottavino being booed off the mound again, and in a cruel twist, CC Sabathia was forced to prematurely leave what apparently will be his final Stadium appearance when he hurt his shoulder on a pitch in the eighth inning. The cheer from the scattered few who remained from the crowd of 49,067 was some of the loudest applause of the night.

“That was tough to watch,” Green said. “It’s definitely not the way you want to see him go out.”

The same could be said for the Yankees. Kicking balls, botching another third-to-home rundown, letting Zack Greinke off the ropes, another recurring episode of offensive futility. The Yankees have scored a total of six runs in their three losses, and five of those have come on three homers. Greinke gifted them the other one Thursday with a bases-loaded walk in the first inning.

The Yankees basically unraveled in Game 4, continuing the same depressing theme of this ALCS after the opening win. And in the wake of Thursday night’s ugliness, it feels as if it will be over soon.

“We’ve just got to wash it off and get ready for tomorrow,” Aaron Judge said.

This stain, however, may not be scrubbed away so easily.

Looking ahead to ALCS Game 5 and facing VerlanderTo extend the season, the Yankees will have to beat Houston's 21-game winner Justin Verlander in ...