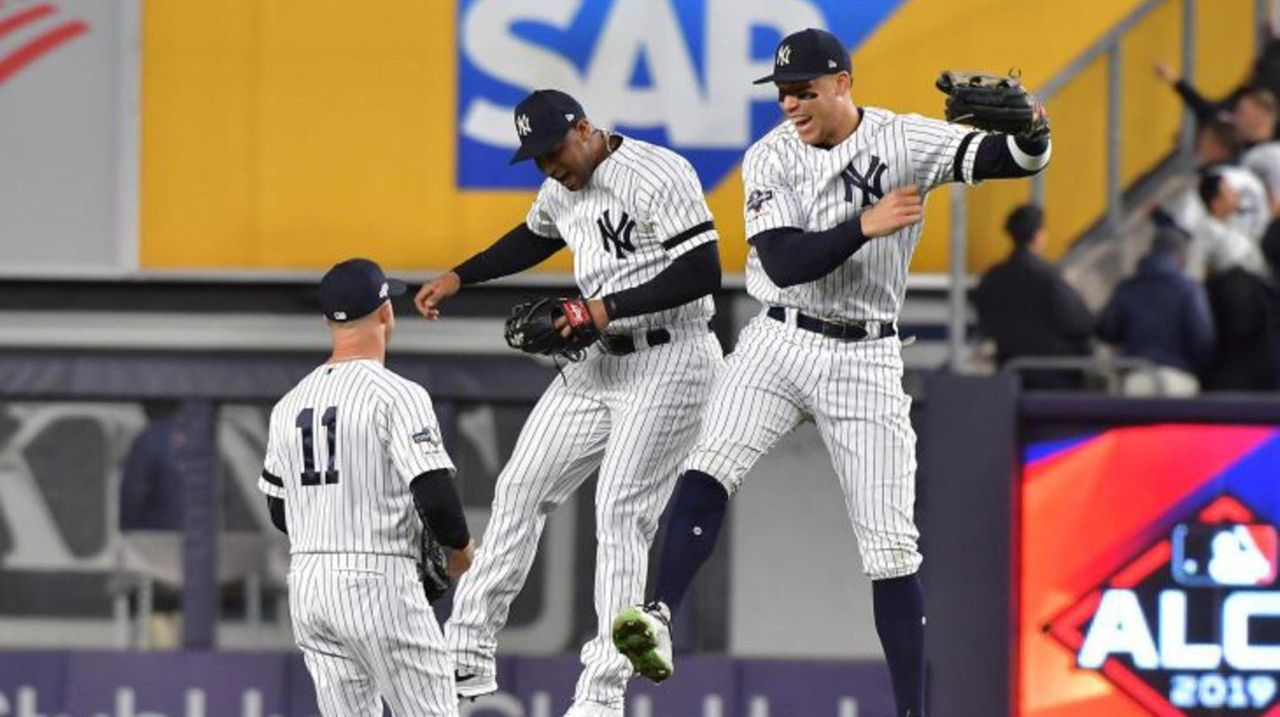 After a big Game 5 win at Yankee Stadium, the Yankees now look to their bullpen in Game 6 to even the ALCS against the Astros. Credit: Newsday / Robert Cassidy/Greg Inserillo

Desperate times called for Giancarlo Stanton, plain and simple. There was no sugarcoating the urgency any longer.

With the Yankees facing elimination in Friday’s Game 5 of the ALCS, Stanton had to return to the lineup somehow, some way — if he was mobile enough to rumble along at 90-foot intervals. No need for a glove, as Stanton replaced the flailing Edwin Encarnacion at DH.

“It’s now or never,” Stanton said during batting practice. “Must-win game, so I gotta be in there and have an impact.”

The Yankees hoped that Stanton may only need to jog after launching a ball over the fence, and according to everything we heard from Aaron Boone this week, the right quad strain didn’t bother him too much at the plate. But day after day, with the slumping Yankees falling further behind, Stanton remained on the shelf, available as a pinch hitter on a team that doesn’t pinch hit.

This was quickly developing into an unflattering chapter in Stanton’s early playoff legacy, to have him reduced to being a dugout-rail spectator in the October demise of the 103-win Yankees. Not because Stanton was dealing with a leg injury, but more due to the team’s handling of it, his murky availability amid the club’s lack of offensive production.

It was obvious that Stanton wasn’t capable of playing the outfield. His brief pregame workouts were evidence of that, as Stanton did not show the agility necessary to handle the position. But the Yankees couldn’t exit October riding the ice-cold Encarnacion (1-for-15, 8 Ks in ALCS) from the DH spot.

If Stanton was able to swing a bat, even on one leg, that would have to do. And it seems like he came to that realization, along with Boone, when the two talked after the Yankees’ 8-3 loss to the Astros Thursday put them in a 3-1 series hole.

“He’s been kind of wanting in there the last few days, and held off, held off,” Boone said before Game 5. “And then he actually did come by my office [Thursday] night and we both kind of said, ‘Let’s go.’

“He just felt good about his progress. Clearly not a hundred percent running, but I don’t feel like hitting will be an issue for him. Just have to kind of govern himself out on the bases.”

After what we witnessed from the Yankees during their three ALCS losses, anything Stanton might provide would be considered an upgrade. It already seems like an eternity ago, but Stanton blasted a 406-foot homer off Astros starter Zack Greinke in the sixth inning of the Yankees’ 7-0 victory in Game 1.

The next day, Stanton disappeared from the Yankees’ lineup, the result of the quad strain suffered running out an infield single before that homer in Game 1. And in Stanton’s absence, the offense immediately went into the tank, hitting .155 (16-for-103) with 32 strikeouts and just .062 (1-for-16) with runners in scoring position. The Yankees also scored a total of six runs in those three losses, and five of those runs came on three homers.

Stanton, on a good night, can go deep a couple of times on his own. And the Yankees needed that threat back, with Boone inserting him in the cleanup spot Friday against Astros starter Justin Verlander.

“It’s big,” Stanton said. “I’d like to contribute. I’m here just to be out there too. That’s the most frustrating part of these past couple of days. But if I can be in there and contribute, that’s what we need. And we need it now.”

Stanton only played 18 games during the regular season because of numerous injuries, including shoulder, knee and calf problems. The fact that he made it back at all was fairly surprising, but that short, intense ramp up at the end of September may have been a contributing factor to the quad issue.

The timing of Stanton’s return comes right after CC Sabathia walked off the mound for the final time of his career in the eighth inning of Thursday’s loss. The sight of a broken, tearful Sabathia leaving with a dislocated shoulder was emblematic of the battered Yankees being pushed to the brink. Perhaps Stanton’s return could be symbolic of a revival.

“I think we’ve had our backs against the wall all year,” Sabathia said Friday. “We’ve dealt with so many injuries, not just myself. That’s a tough group in there and our slogan has been ‘Next Man Up.’ Yeah, we’re in a tough spot, but I feel good about our guys and our chances. Just one game at a time.”

Finally, Game 5 included Stanton, who was trying to make sure there would be a few more.

Lennon: Stanton looks great; now, can he stay healthy?
Mets' Martinez out four months after colliding with umpire
Jets place franchise tag on Marcus Maye ahead of deadline
Griffin brings depth to the Nets' frontcourt
Knicks' Randle, Toppin thrilled with All-Star Weekend
Source: Mets to begin contract talks with Lindor this week
Didn’t find what you were looking for?