Luke Voit of the Yankees swings at a pitch during the first inning against the Blue Jays during a spring training game at TD Ballpark on March 21 in Dunedin, Fla. Credit: Getty Images/Douglas P. DeFelice

But Saturday’s unexpected — though hardly surprising — revelation that Luke Voit needs to have his left knee scoped for a torn meniscus was the first real "uh-oh" moment of the Yankees’ 2021 spring training.

They made it all the way to March 27. And based on their past Grapefruit League casualty count, that’s fairly impressive. 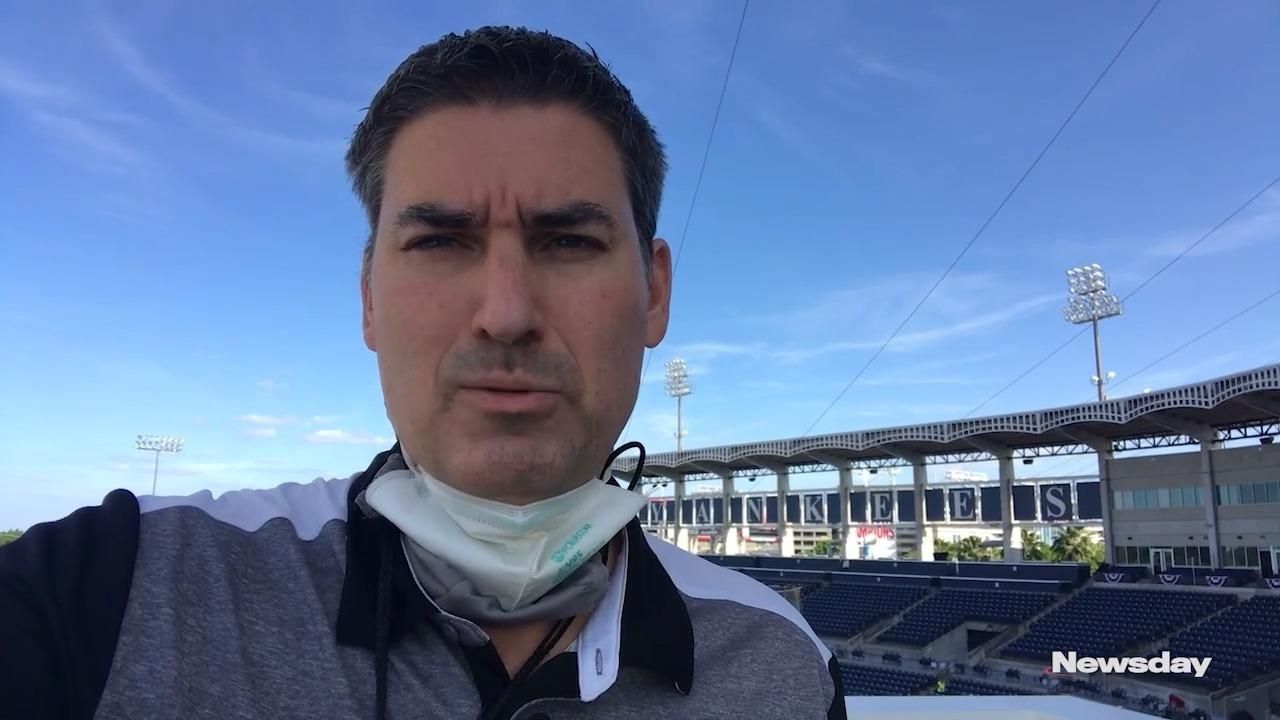 Losing Voit, however, even until mid-May or so, is a gut punch — especially with 14 of the season’s first 17 games against the Blue Jays (six), Rays (six) and Atlanta (two). This one stings because with the patched-together rotation and the now Britton-less bullpen, the Yankees’ plan of pummeling the opposition just lost one of its most effective blunt instruments.

Voit led the majors with 22 homers during last year’s pandemic-shortened season and was the undisputed clubhouse champ in calling out the Yankees during their less-than-inspiring stretches of baseball playing. There’s no analytical measure for accountability, but it helps to have someone like that around, if only to let everyone know someone’s not interested in blowing smoke.

From a media standpoint, I always appreciated it. But his locker neighbors also recognize the effort Voit pours into his job, and that can be worth something extra to a championship-caliber team.

"It's going to be tough," Aaron Judge said. "Luke's a big part of this team, a big part of this offense. He brings a lot to the table — a guy that hits in the middle of this lineup, hits for power, uses the whole field, solid guy over there at first. An outspoken guy in the clubhouse that gets us motivated. We’re going to be missing out on that for at least a month."

In typical Voit fashion, he’d been playing on a wobbly knee for most of this month, and the Yankees, well, they followed a familiar pattern in letting him do it — right up to the point when they had to make a roster decision on Jay Bruce.

The first thing that came to mind Saturday upon hearing the Voit update was the questionable tag-up attempt on that March 11 afternoon in Clearwater. Voit had been scratched earlier in the week for a knee issue, but he along with manager Aaron Boone shrugged it off, saying the ill-fated dash was merely him wanting to test the leg. Maybe they thought Voit got a passing grade that day. Ultimately, everyone flunked.

"Obviously he's been playing with it and actually he's been pretty adamant that playing has been fine," Boone said. "Just some of the swelling had returned, so that was a little frustrating for him, so he and us wanted to get that looked at just to see what we're dealing with in there."

There was no mention of when the partial tear occurred. But after the pending surgery, Voit will be shut down for three weeks, with another three necessary to get back in baseball shape.

For those who complained all winter about the Yankees being too righthanded at the plate, now you get Bruce as the everyday first baseman. Not how it was drawn up, but at least the Yankees figured out the Voit situation within Bruce’s 48-hour opt-out window and retained him just in time with an early Saturday morning phone call.

This move would have felt better on March 9, after Bruce’s second homer in five games. Since then, however, he’s gone 1-for-18 without going deep and batted .194 (6-for-31) overall in 13 exhibition games. Bruce was mainly auditioning as a fifth outfielder/part-time first baseman, but he now inherits the latter gig on a regular basis — while the Yankees subtract their most reliable power bat of the past 2 1/2 years.

"Luke's injury is disheartening for everyone," said Bruce, who has played only 3% of his 1,564 career games in 13 seasons at first base. "My goal is not to come here to replace Luke Voit — it’s to be Jay Bruce, and help the team just like I planned on helping the team when I signed the contract to come here."

The Yankees, minus Voit, could use the help, because it’s been a strange time for the offense. Before Gleyber Torres’ two homers in Saturday’s 5-1 victory over the Blue Jays, the Yankees were dead last in batting average (.215) and 26th in OPS (.684). This is only practice, of course. But to be at such an extreme still looks odd compared to the rest of the league.

As for Bruce, the best number he has going for him is 314 — as in the distance down the rightfield line. The short porch should be a lefthanded hitter’s pal, even if Bruce’s history in the updated Bronx ballyard doesn’t reflect that (.113 batting average, two homers, .481 OPS in 53 at-bats).

The Yankees? At this point, they’re anxious to get out of Tampa before anything else goes wrong.

Jay Bruce stays with Yanks as Luke Voit heads to injured listThe first baseman, who has battled knee soreness on and off during spring training, soon will undergo surgery to repair a torn meniscus in his left knee and will start the season on the injured list. Stanton agrees with Clark about asking to move All-Star GameMany believe that a Republican-sponsored bill signed into law this past week will make it more difficult for minorities to vote in Georgia. Yankees prospect Schmidt goes on 60-day injured listThat represents the amount of time it will take Schmidt to get ready after essentially missing the entire six weeks of spring training.