Aaron Judge is thrown out at home as Rays catcher Mike Zunino makes the tag in the 10th inning on Sunday.  Credit: AP/Chris O'Meara

Does it really need to be this hard for the Yankees?

Check out the bizarre combination of factors that had to fall perfectly into place Sunday for the Yankees to scrape together an 8-4 victory over the Rays in 10 innings and narrowly avoid being swept at Tropicana Field.

Ignore the eventual four-run margin. This was a white-knuckle escape, as the Yankees were one pitch away in the 10th from blowing another rally — or what passes for one these days.

Here’s what the win required: 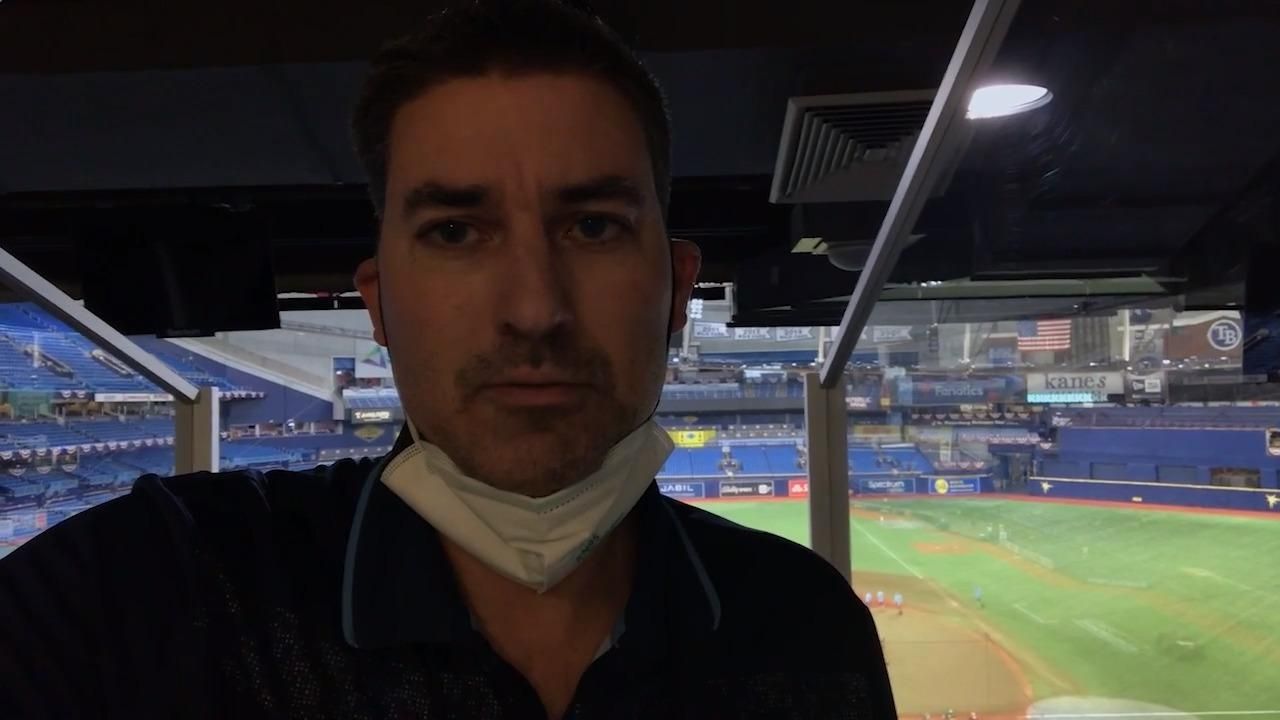 Rob Manfred’s 10th-inning ghost runner at second base. A pitch brushing Aaron Hicks on the baggy end of his pant leg that was so slight that it had to be reviewed to determine that the ball nicked him. A sacrifice bunt (!) by Mike Tauchman.

And after that, when the Yankees were on the verge of blowing it again — thanks in part to Aaron Judge getting cut down at the plate on a doomed contact play — they turned to Rougned Odor, the guy the Rangers are paying $27 million over the next two years to call the Bronx home.

Odor made his Yankees debut Sunday at second base because Jay Bruce (.111 batting average, 10 strikeouts in 27 at-bats) already has washed out at first, forcing DJ LeMahieu to move over, and Aaron Boone couldn’t wait forever for offense after the Rays outscored his team 14-5 in the first two losses.

Before Odor stepped to the plate with two outs in the 10th inning, the Yankees were 1-for-11 with runners in scoring position, which is standard operating procedure for them in 2021. Almost immediately, Odor went down 1-and-2 to reliever Collin McHugh, leaving the Yankees’ fate to the guy who was the worst two-strike hitter in the majors (.079) last season.

Not the predicament they’d want to be in. But Odor battled McHugh for an eight-pitch at-bat, finally punching an RBI single that dropped in front of charging centerfielder Brett Phillips.

"It was an amazing feeling," Odor said.

Not just for him, either. The gigantic sigh of relief coming from the Yankees could have made the Trop’s inflatable roof balloon. For most of those 10 innings Sunday, Boone & Co. were the very definition of pressing, as if the mere sight of the Rays is enough to make them forget how to play the game.

After Odor, everything looked easy. Gary Sanchez poked another RBI single up the middle and Gio Urshela, who also hit a hustle double and a 453-foot homer, produced two more runs with a misplayed RBI single.

Before Odor? It was a Three Stooges film festival. The Yankees went from having Michael Wacha on the ropes to rolling over, as last year’s Mets reclamation project gave up three runs almost instantly. He then retired nine straight and 11 of 12 to hold them down until the seventh inning.

As baffling as it was for the Yankees to be dominated by Wacha, their performance was more difficult to explain once they actually put a few men on base.

In the seventh inning, down 4-3, the Yankees loaded the bases with one out for LeMahieu, who hit .386 with runners in scoring position the past two years, tops in the majors (minimum 120 plate appearances). Of course, LeMahieu slapped the second pitch into a 5-4-3 double play.

Gleyber Torres’ one-out RBI single delivered the tying hit in the eighth, snapping his own 0-for-6 funk (five strikeouts) with runners in scoring position, but the Yankees still stranded two that inning.

The ninth, however, was the real stunner, as they got a gift from the Rays, who botched another double-play grounder off the bat of LeMahieu.

Thanks to the error, the Yankees had runners at second and third for Judge with one out. About as ideal a scenario as they could have hoped for. But when catcher Mike Zunino kept a dirt ball in front of him, an overzealous Brett Gardner got hung up off third and was easily caught in a rundown, defusing the threat.

"We’ve always had some struggles here in Tampa," Judge said. "I don’t know what it is."

Even with Sunday’s grinding victory, the Yankees are 5-13 against the Rays in the past two seasons, including the Division Series loss. It’s insane to suggest that a game on April 11 carries much weight with nearly six months to play. But the Yankees have felt like a team treading water, and beating Tampa Bay was important, especially with the dangerous Blue Jays waiting just down the road at their Class A ballpark in Dunedin.

"It was really good to see us finish it off," Boone said.

Better than the alternative, that’s for sure.