The Yankees' Gerrit Cole walks to the dugout after being removed during the sixth inning in Game 5 of the the ALDS against the Rays on Friday in San Diego. Credit: AP/Gregory Bull

Gerrit Cole answered the call Friday night, pitching on short rest for the first time in his career in an attempt to save the Yankees’ season.

He just couldn’t do it for long enough.

That’s now the epitaph for his first season in pinstripes, one that began with World Series expectations on the December day he signed his nine-year, $324 million contract.

Instead, it ended with a Division Series loss to the Rays after Cole got the Yankees to the sixth inning of Game 5 with the score tied at 1. Of course it had to be the revenge-minded Mike Brosseau who delivered the knockout blow, homering off Aroldis Chapman in the eighth to give the Rays a 2-1 victory. 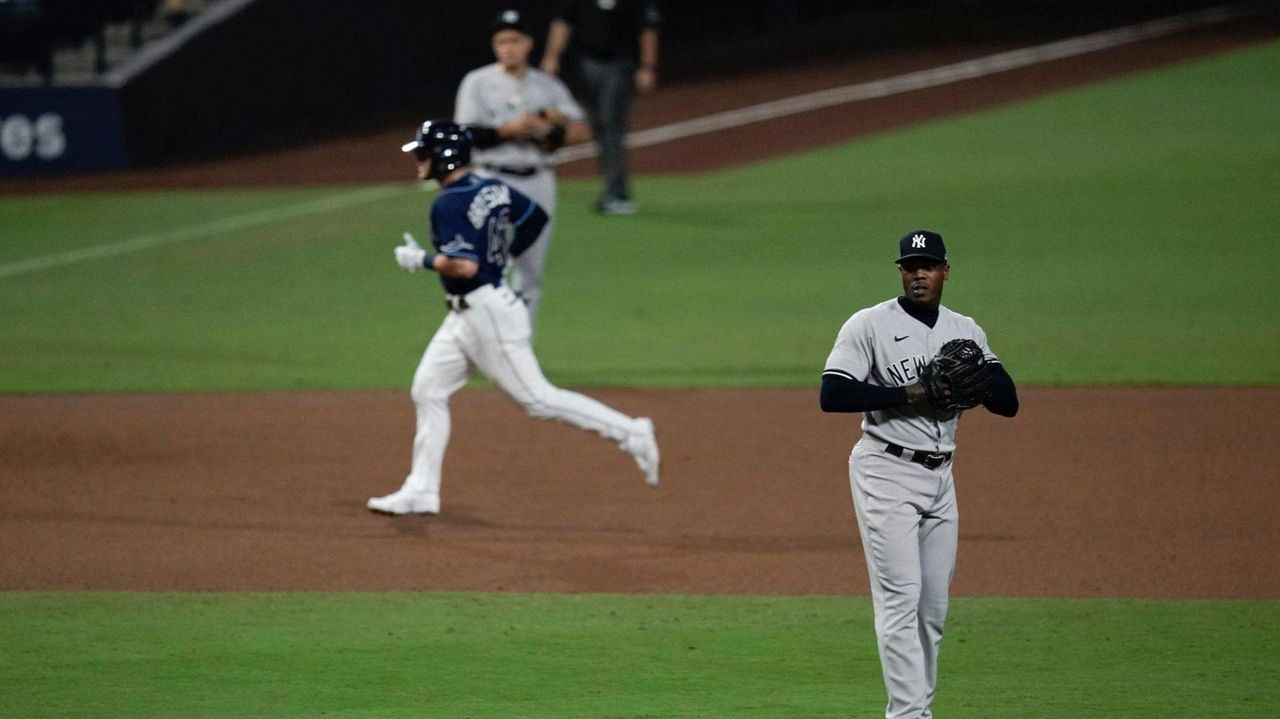 There wasn’t much else Cole could have done. He struck out nine in the 94-pitch performance, and the only hit he allowed was Austin Meadows’ two-out homer in the fifth. Ultimately, Cole was foiled by two innings that drove up his pitch count: 25 in the tightrope first and 28 in a scoreless fourth.

"Just so proud of his effort," manager Aaron Boone said. "That was just a championship, special-player effort. He showed his mettle again, and who he is, by the effort he put out tonight."

At times, Cole overwhelmed the Rays, whose only hope was to outlast him and take their best shot at the Yankees’ bullpen, which Brosseau wound up denting. Cole now has a 2.71 ERA in 13 playoff starts and a 3.09 ERA in four elimination games. His 11.71 K/9 ratio for the postseason (minimum 50 innings) is second only to the Dodgers’ Kenley Jansen (12.72)

"I felt good about holding them down," Cole said. "I mean, gosh, how many times have I pitched against these guys? Like six or seven? It’s just like on a tape recorder with these guys. It’s tough. It was a good fight. It sucks losing."

Cole’s final pitch was an 83-mph curveball to the ever-dangerous Randy Arozarena that wound up in the outstretched glove of Brett Gardner, who reached over the leftfield wall to pull it back. At first, Cole looked unsure that Gardner made the grab. But as he turned to salute his teammate, Boone already was on the way to the mound.

"I wanted to get through the rest of the inning," Cole said. "But I was probably out of bullets. Any time I can walk away from it not having anything left in the tank, at least that feels good."

The Yankees dodged more damage by the length of Gardner’s glove — but it was the one Aaron Judge couldn’t get that proved to be the only blemish on an otherwise brilliant performance by Cole. That came with two outs in the fifth, when Meadows lifted a changeup a few rows deep in the rightfield seats.

The tying homer landed like a punch to the gut after everything Cole had done to that point. Coming back on short rest. Escaping a bases-loaded jam in a 25-pitch first inning.

Early on, there was concern about whether Cole still would be around for the sixth. He opened the night in statement fashion, whiffing Meadows on three pitches, but suddenly lost command.

Two walks and a fastball off Arozarena’s elbow guard loaded the bases, and when Cole fell behind 3-and-0 to Joey Wendle, he had to fight back to freeze him with a 97-mph fastball to kill the threat.

With the Rays chirping at him throughout, Cole let out a roar toward their dugout after the Wendle K. From that moment, the $324 million man was back.

Cole struck out six of seven to complete the third inning — the last two with 100-mph fastballs. By then, it was a race against the pitch count for Cole, whose fourth inning was extended by Gleyber Torres’ error and Wendle’s 10-pitch battle before flying out.

Cole still appeared fine in the fifth when he got Mike Zunino looking at a 99-mph heater, but Meadows stung him two pitches later to tie the score.

That Meadows homer will be what haunts Cole and the Yankees over this longer winter. But both came away knowing more about the team’s ace, even with this demoralizing finish to the season.

"There were a lot of challenges this year," Cole said. "Dealing with a newborn, being across the country, haven’t seen my family. It was really hard at times. I just did the best I could. And I’ll try to get better."