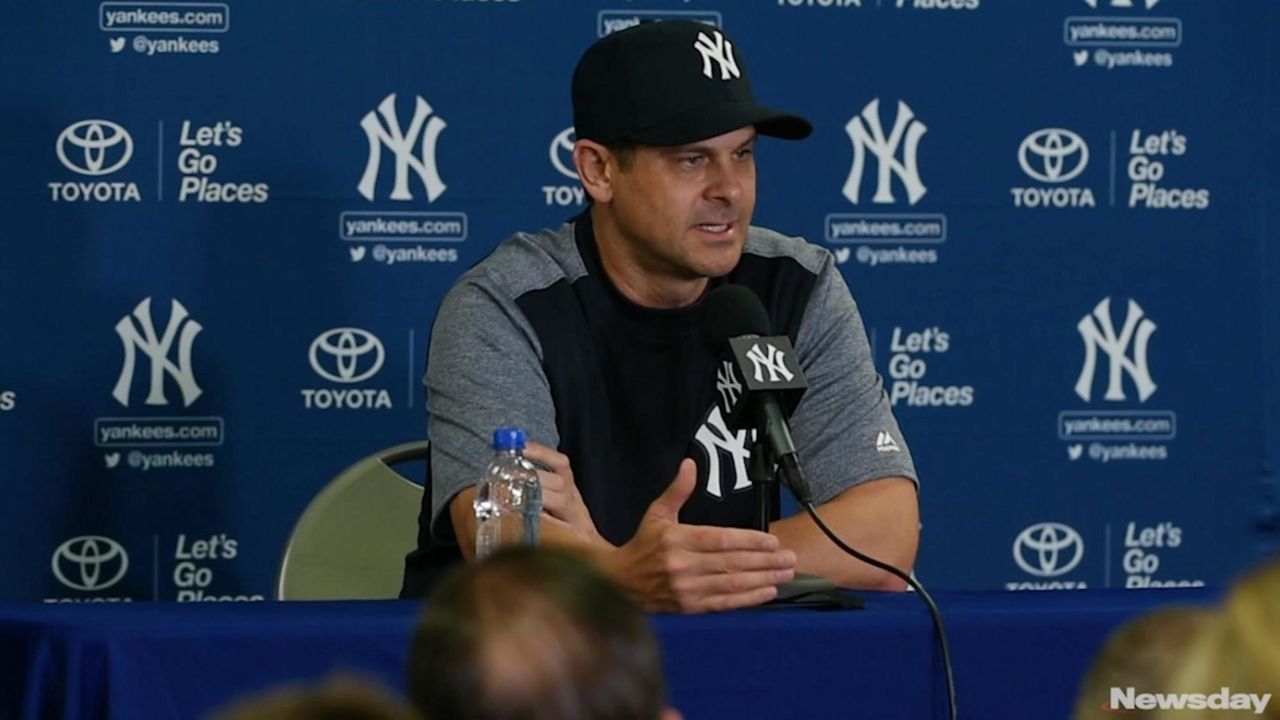 TAMPA, Fla. — Given the previous rock-solid stability of the manager’s office, a decade of Joe Torre followed by another decade of Joe Girardi, there’s no one in a Yankees’ uniform with more to prove during the next six weeks than Aaron Boone.

Boone convinced general manager Brian Cashman he’s the right man for the job through a lengthy interview process, but that’s hardly a guarantee of success. Now we’ll get to see him in real-time interacting with players, supervising workouts, handling the media. Every. Single. Day.

That’s a daunting task for any manager regardless of the resume, and Boone arrived Tuesday at Steinbrenner Field with exactly zero days of coaching experience at any professional level. Boone cited his seven years in the ESPN booth as preparation for this role, and we’ll give him that. At least he’s up on current events, the state of the modern game.

People were skeptical about Torre because, at age 55, his three previous managerial stops with the Mets (.405), Braves (.529) and Cardinals (.498) were less than inspiring. Girardi seemed to be a much safer bet, after earning Manager of the Year honors for getting a woeful Marlins team to 78 wins in 2006. When he came down from the YES booth two years later, he already was familiar with the Bronx landscape.

For Boone, every aspect of this is new. He played for the Yankees, sure, but that was 2003, under Torre, which feels likes another lifetime ago. So what makes Boone think he can do this? We’ll give him points for cruising through Tuesday’s media session with an easy confidence, not stumbling once during his 34 minutes at the microphone. And when we asked him if it was fair to say he had the most to prove this spring, Boone, after a short pause, didn’t duck the question.

“OK, yeah, I understand where we are,” Boone said, smiling. “It’s the New York Yankees. Obviously, having never done this before, I understand there’s a lot of questions. A lot of people can’t wait to see what my style is or how I’m going to go about things or how I’m going to command the team. So maybe it’s sone of the more interesting things to see how that unfolds.

“But I’m consumed with the job and being great at it.”

That’s the line. If there’s one takeaway from Boone’s first-day performance, highlight that sentence. Circle it in red ink. For all the front-office approved material Boone offered up to the masses, he steadfastly believes this is going to work. That a sabermetric-friendly, players-manager mindset can get the Yankees to a World Series after missing by one victory last season.

It’s what Cashman is banking on. Both the GM and Hal Steinbrenner did not attend Tuesday’s media session, choosing to watch it on TV and let Boone have the stage to himself. That served another purpose, too. With so much said about managers being nothing more than an extension of the front office, this gave the appearance, at least for one day, that Boone was operating independently of the Yankees’ executive branch.

Of course, he’s just the clubhouse part of the chain of command, and how he develops relationships on that end ultimately will define his Yankees’ career. In that department, Boone reminds us of Torre, who took over the reins in ’96 as the anti-Showalter and put very few restrictions on his clubhouse. The most important? Being on time.

“I’m easygoing as long as everybody works hard,” Torre told Newsday during the opening week of his first spring training in 1996. “I don’t start off by mandating this and mandating that. They have a job to do. I know what it takes to play baseball.”

Boone is only 44, but he’s smart enough to know how the game is played now, and we don’t just mean on the field. Two decades ago, Torre didn’t have a battalion of analysts dissecting each opponent, or planning for every contingency. He often talked of trusting his players, or sensing who was right for what spot. More often than not, Torre’s instincts — as well as a roster stacked with talent — worked for him. Boone is counting on a happy clubhouse translating to a championship one.

“It’s really important to me that those younger players feel comfortable in that room, feel like that they’re allowed to be themselves in that room,” Boone said. “Hopefully if the communication is strong, it creates a winning environment.”

The Boone experiment starts now. And the pressure only goes up from here.

Boone wants Yanks to embrace expectationsDellin Betances said it would be a disappointing season if the Yankees don't win the World Series.

Georgiev to start, but who's the backup?
Claxton returns to Nets after 17 games
KD leads Nets with 30 points to hold off T-Wolves
St. John's digs early hole against No. 8 Kansas, can't get out
Shesterkin injured in Rangers' win over Sharks
NYCFC trying not to change much for Eastern Conference final
Didn’t find what you were looking for?