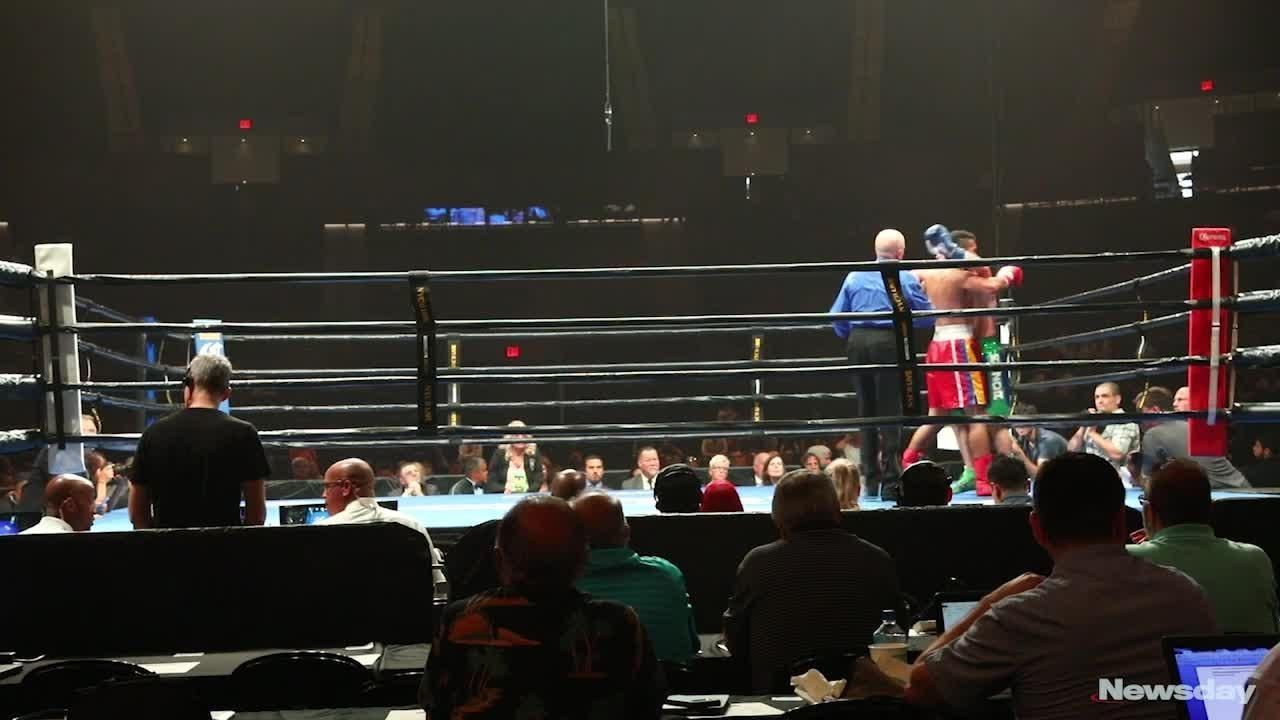 The beloved relic that was Nassau Veterans Memorial Colis eum has a rich tapestry woven into Long Island’s sporting culture. Walking into the building Islanders fans once called the “old barn” last night, I encountered referee Arthur Mercante Jr., who was scheduled to officiate a bout between Polish heavyweights Adam Kownacki and Artur Szpilka on the first boxing card at the Coliseum in 31 years.

Mercante’s father refereed the last main event at the Coliseum between heavyweights Mike Tyson and Steve Zouski, so, you know it was special for Arthur Jr. to have a hand in boxing’s comeback. Walking down a hall on the floor level, Mercante pointed out a picture of heavyweight greats George Foreman and Joe Frazier battli ng in the Coliseum.

Those were the days, but Long Islanders don’t know if the arena will host sporting events of that magnitude again. On Friday, a group of Long Island politicians rallied outside the Coliseum urging the return of the Islanders from Barclays Center in Brooklyn. It might be a quixotic quest.

When all previous efforts to rebuild the Coliseum failed and local politicians and voters settled for the renovated version, the handwriting was on the wall. Downsizing is not the way to maintain major-league connections.

Just as the Long Island Nets, who will be the Coliseum’s primary sporting tenant, are the minor-league affiliate of the Brooklyn Nets NBA franchise, last night’s Premier Boxing Champions on Fox TV card, while it featured some very good matchups, paled by comparison to the Adrian Broner-Mikey Garcia bout that is scheduled July 29 at Barclays Center.

The main event last night matched welterweights Omar Figueroa Jr. and Robert Guerrero, two former world champions, but they had no relevance for a Long Island audience. They were on the card to attract Hispanic and West Coast viewers for the Fox TV telecast.

Maybe that was related to the mixed message sent by a main event that failed to generate local interest. But that is exactly the problem the Coliseum faces on many levels since losing the Islanders and going through renovation and what only can be described as a very confusing re-branding process.

To long-time Long Island sports fans, the building is simply, “the Coliseum.” But Brooklyn Sports and Entertainment, which operates it as an adjunct to Barclays Center, is in the beginning stages of developing an entertainment complex that officially will be known as NYCB Live’s Nassau Coliseum.

That’s a mouthful, and nobody knows what it means. In similar fashion, the boxing program is branded as Brooklyn Boxing on Long Island. That’s another confusing label, if not downright misleading.

The good news for Long Island boxing fans is that there is a commitment from management at Barclays to make boxing a regular part of the Coliseum schedule. Still, with a new building and problems familiarizing people with the new NYCB Live brand, the marketing team must find a way to make the Coliseum seem familiar to Long Islanders again.

But as promoter Lou DiBella said, “You have to start somewhere. There hasn’t been big-time boxing on Long Island in 31 years. This is a start.”

Parcells believes Schoen is right man for job
K'Andre Miller growing into role on Rangers' blue line
LaMarcus Aldridge can still be go-to guy for Nets
Mets announce coaching staff under Buck
It's a whole new ballgame when it comes to getting into Hall
Isles try to keep things fresh as seven-game homestand begins
Didn’t find what you were looking for?