Garden City head coach David Ettinger calls in a play during the first half of the Nassau Conference II football game against MacArthur in Garden City on Saturday, October 26, 2019. Credit: Peter Frutkoff

Dave Ettinger was classy in defeat, showing little to no emotion.

The Garden City coach gracefully applauded the effort of the MacArthur football team and its coaching staff. Moments after MacArthur ended Garden City’s 42-game winning streak with a 27-7 road win, there was Ettinger offering his hand to Generals coach Bobby Fehrenbach.

Garden City was on the cusp of becoming the only program in Long Island history to win 43 games in a row. They were denied. And it didn’t matter that it was by 20 points. It could have been by one – because a loss is a loss.

Instead, Garden City will have to share the record book with Floyd, which won 42 consecutive games from 2005-2008. 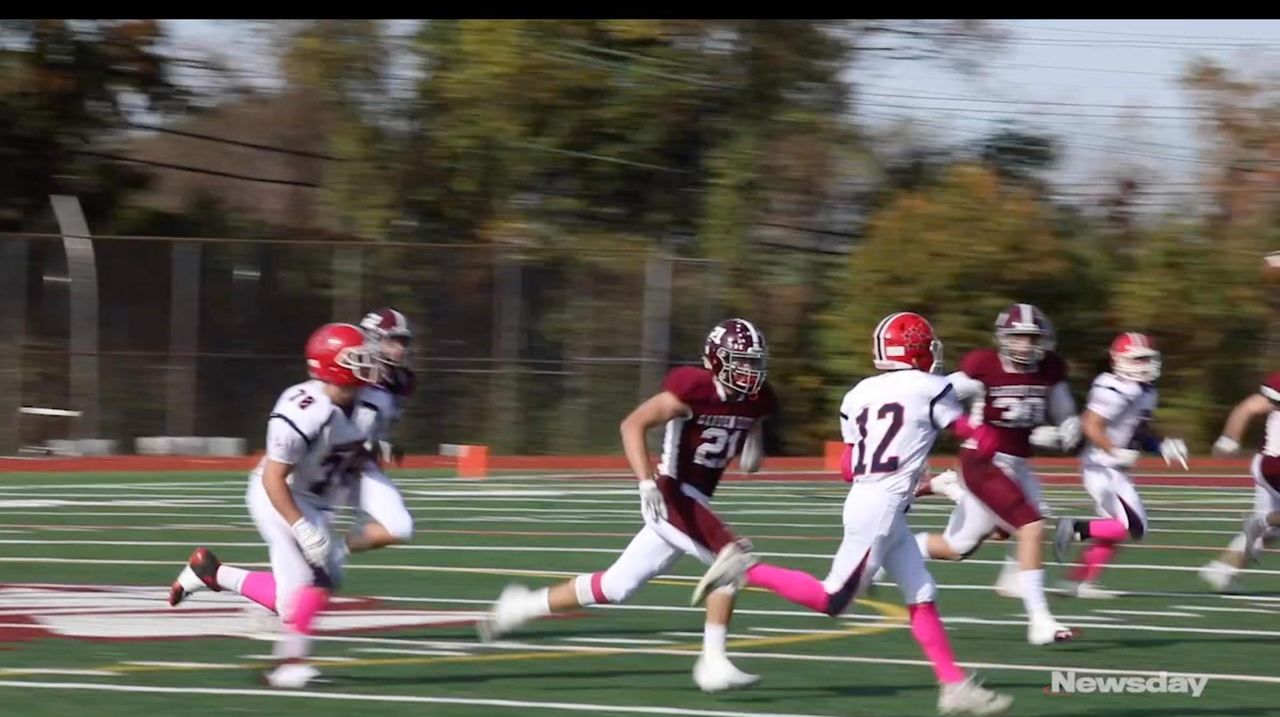 Garden City's record win streak ends at 42 The Garden City winning streak is over. It was stopped in stunning fashion as MacArthur rolled to a 27-7 win at Garden City before a crowd of more than 3,300 on a sun-splashed afternoon in a Nassau Conference II football game on Oct. 26, 2019.  Credit: Newsday / Shelby Knowles

These Trojans never experienced defeat. Some of them have played three years for the varsity and only knew about championship runs. During the 42-game winning streak, the Trojans earned three Long Island Class II championships.

Garden City is one of only four programs to win three straight Long Island championships. The other three are Floyd, Shoreham-Wading River and North Babylon. But Garden City is the only team to ever win three consecutive LICs with perfect 12-0 records.

The last Garden City football loss before Saturday was November 13, 2015. It happened in the Nassau Conference II semifinals in a wild 18-13 loss to Wantagh. It was devastating. Wantagh employed a play-action, throwback pass for the fourth quarter comeback win.

Streaks are meant to be broken sooner or later. And this Garden City football streak lasted a long time, three and a half years or 1,443 days, but who’s counting?

This experience wasn’t devastating. The possibility to sit alone in the record books was nice. The opportunity was there for the taking. But there is a tomorrow unlike the last loss in 2015 – when the team was eliminated from the playoffs.

“This one will sting for a while and then we’ll get back to work,” Ettinger said. “We knew it was going to end at some point, one year. But better to lose a game in the regular season than the ones that matter in the playoffs. This one will serve as a test for what we can improve upon and make the right adjustments to win the next one.”

Garden City was all of that. There were no excuses. There was a collective tip of the cap to MacArthur and a vow to try and win the next possible meeting in the postseason.

Garden City has become the gold standard for Long Island football. On Saturday, it proved you can lose and still be looked upon as a winner.

It was only the second loss in Ettinger’s five years as a head coach. He was the author of 51 wins in his first 52 games, a remarkable run of success. The man has poured his life’s work into the Garden City football program after watching his mentor Tom Flatley do the same. By the way, Flatley has the fourth longest winning streak in Long Island history at 32 from 1990-1992. He was there Saturday watching the game from a golf cart.

He also poured his soul into the program, building a foundation of what Ettinger would continue to build upon.

Ettinger always avoided talk of the streak, calling it important but a distraction. Floyd coach Paul Longo felt the same way when his Colonials dominated in Class I from 2005-2008.

“The pressure continued to mount as the streak grew,” Longo said. “Guys were in the locker room at halftime and saying they didn’t want to be the ones that lost. We lost a heartbreaker in a divisional semifinal and it was devastating because our season was over. At least Garden City can avenge the loss.”

“I’ll never forget it,” Longo said. “It was a weird feeling because we were so used to winning. And then you just expect to win every game. No senior class wants to be the one that ends the streak. I didn’t sleep for days. I’m going to send a card to MacArthur thanking them for keeping us in the record book. And I’m going to send a card to Garden City, congratulations on a monumental achievement.”

“If we’re going to share the record,” Ettinger said. “There’s no one better than Paul Longo.”

So move over Paul, you’ve got company.