Mats Zuccarello #36 of the New York Rangers celebrates his first period goal against the Ottawa Senators during game three of the Eastern Conference Semi Finals at Madison Square Garden on Tuesday, May 2, 2017 in New York City. Credit: Jim McIsaac

Twenty or thirty years from now, he will be one of the figures whose image on the big screen at Madison Square Garden will draw an instant and joyful response. At the sight of his face, the crowd will jump up and shout, “Zoooooook!”

Mats Zuccarello is the people’s choice, in the stands and in the Rangers locker room. He is the little guy with a big game. When good things happen for the Rangers, they often start with him, as they did when he scored the goal that began the avalanche of momentum in an absolutely essential Game 3 win against the Senators Tuesday.

He is beloved partly for his results — he is tied with Michael Grabner and Brady Skjei for the team playoff lead in goals (four) and has five points in his past four games — and mostly for his style.

“His compete level. That’s all I can say,” said Brendan Smith, who made the transition from opponent to teammate late in the season. “We know he’s got a lot of skill, we know he can score. That’s why a lot of people would love to have him on their team. But what drives a player from being an average player to a great player is your compete level and your work ethic. He has that. Obviously, he gives up a lot of weight, he gives up a lot of size, but he wins a lot of battles. That’s just because he wants it more than a lot of other players. 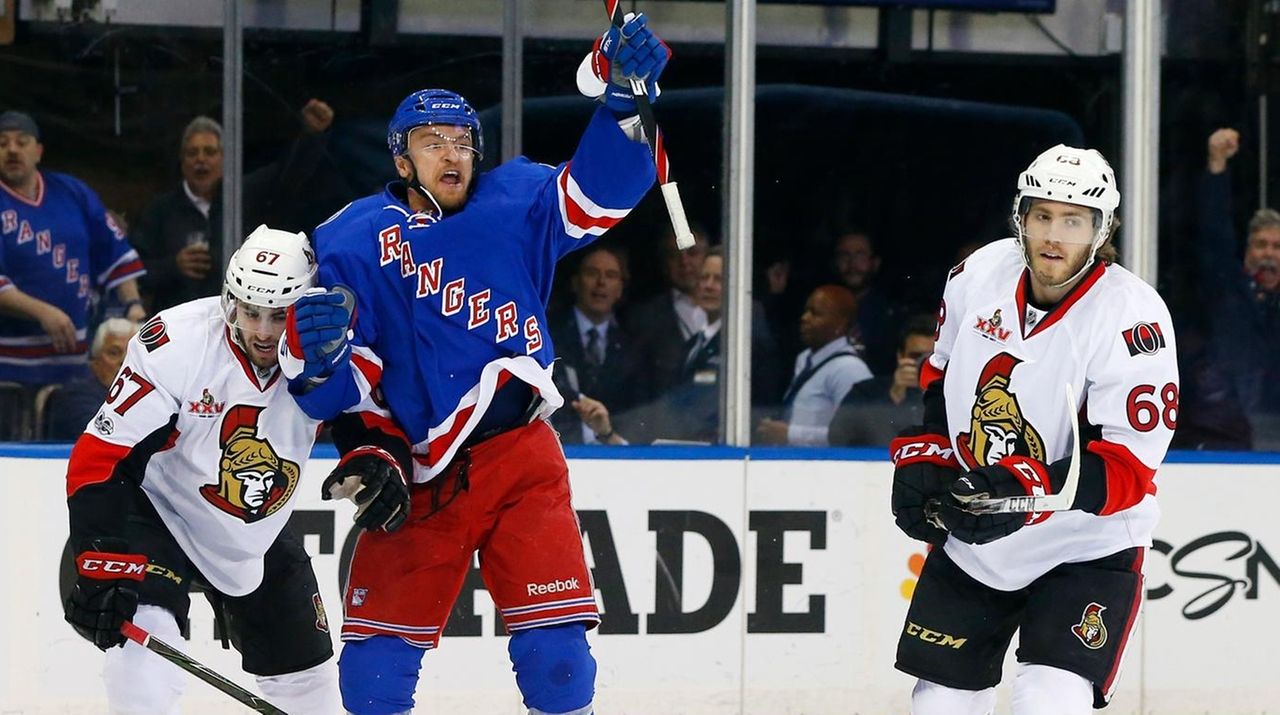 Rangers rebound at MSG with Game 3 win The Rangers beat the Ottawa Senators, 4-1, in Game 3 of the Eastern Conference semifinals at Madison Square Garden on Friday, May 2, 2017, earning their first win of the series. (Credit: Newsday / Robert Cassidy, Greg Inserillo)

“When he wins battles and makes plays, everybody feeds off of it.”

Zuccarello gives the Rangers universe something else for which it hungers. The 5-8, 179-pound winger’s spunk and out-of-nowhere back story bring sparkle to a team that, however solid, is not brimming with charisma.

Fans relate to an undrafted kid from Norway, where hockey was seen as something that people from Sweden did. New York is a pushover for a guy who endured a frightening head injury (on a shot from teammate Ryan McDonagh in the first round of the 2015 playoffs). He suffered a fractured skull and brain contusion that rendered him unable to speak for four days.

But you didn’t hear that from Zuccarello. He reverted to what he has called his Norwegian humility after nights such as Tuesday, when he was voted No. 1 star (he also had an assist). “I don’t know — skating, getting pucks deep, working hard,” he said, in a capsule summary of the torrid start to a 4-1 rout.

True to his times, he was more emphatic and expansive in an essay for the Players’ Tribune earlier in the season. There, he wrote of his mother having enrolled him in skating lessons because he just couldn’t sit still, of playing more pond hockey than rink hockey and of rarely being able to find a game to watch on Norwegian TV. He told of begging his mother to buy a VHS tape of the 2001 Colorado Avalanche’s Stanley Cup run. He figures he watched it 1,500 times. “I just kept rewinding it and rewinding it,” he wrote.

Rangers climb back into series with Game 3 win

These days, people all over Norway stay up to 3 a.m. to watch Rangers games. He calls it a happy nation, and he makes it happier.

He does the same for Rangers country. “I think you can take a lot from Zuke,” said Jimmy Vesey, who has the adjoining locker stall. “He’s obviously not the biggest guy on the ice. His work ethic and how tenacious he is on the puck, that inspires all of us, I think.”

Alain Vigneault said, “He’s fun to be around, always upbeat and always positive . . . He’s got a real good skill set but his best skill is his competitive nature.”

That, and the ability to light up the Garden. Zuccarello has secured his place there. It is stature that, to quote a favorite Rangers phrase, will last a lifetime.