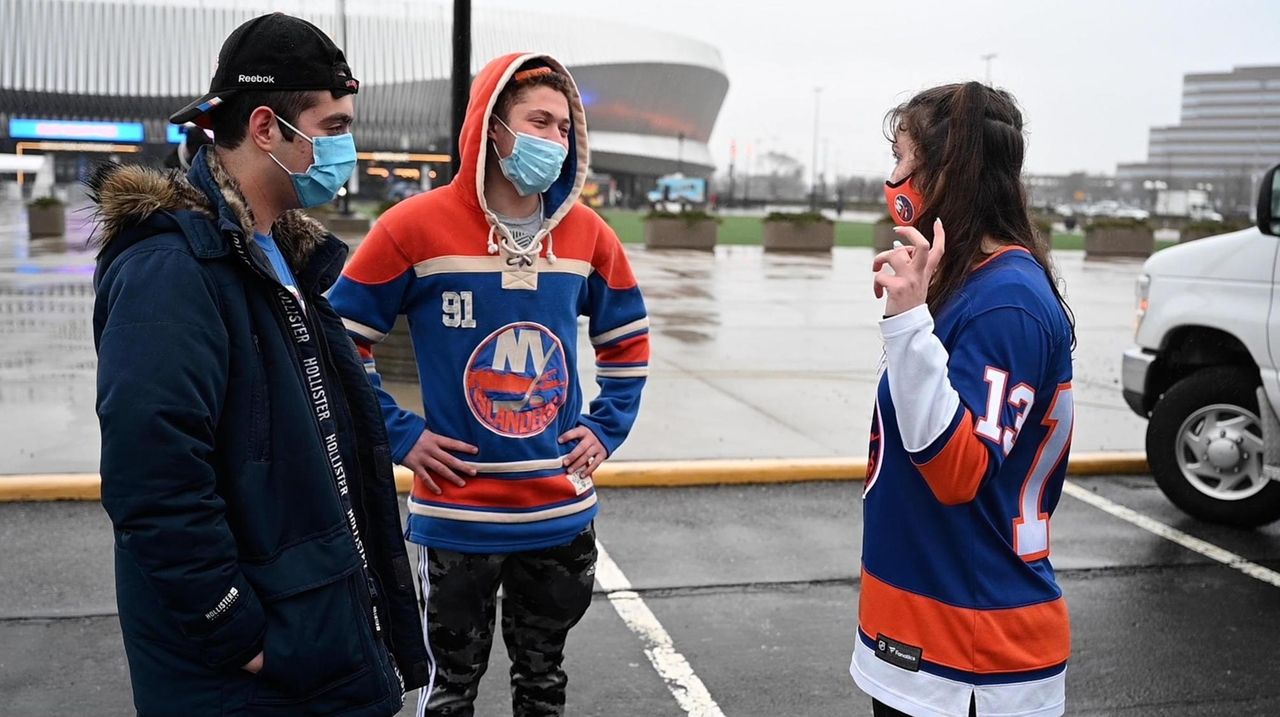 The Islanders hosted the Flyers Thursday night at Nassau Veterans Memorial Coliseum, but the real story was this was the first game that fans were allowed to attend since the beginning of the coronavirus pandemic. Credit: Newsday / Steve Pfost

Dan and Linda Marcote of Wantagh were back at Nassau Coliseum on Thursday night, a mere 376 days since they last watched the Islanders play in person, a row or two away from their usual seats in the lower bowl.

How did it feel? Very good, actually, which presumably was how the 1,391 others in attendance felt about the return of paying customers to the Barn – and by extension their fellow fans watching on television.

"It’s amazing," Linda said. "We have done nothing for a year except be safe and go to work – not a restaurant, nothing. This is our first adventure out, and it couldn’t have come at a better time, with COVID fatigue."

So they decided the return of season-ticket holders to the Coliseum would make for a perfect first night out. The fact it was Dan’s 51st birthday clinched the deal.

"It really is surreal," Dan said, "because you’re here and we’re very excited but the lower [bowl is mostly empty]. It’s crazy. But it’s such a great feeling. It’s so exciting to be back."

The Islanders welcomed customers a bit later than did the area’s other winter teams. They began on March 11 with 1,000 Northwell Health frontline workers.

For Thursday’s game against the Flyers and the six home games after that, 10% of the arena will be allowed to be full, per state regulations. But the Islanders hope that number will increase over time.

Arena workers welcomed fans back before the game and held signs reminding them to wear masks.

Food trucks were set up in the rain outside, and fans were asked to bring their food to their seats rather than linger in the concourse.

Then the fans took their places among the cardboard cutouts that have populated the Coliseum all season. Among them was NHL commissioner Gary Bettman. (The live version, not a cutout.)

Early on in what ended up a 4-3 loss, the fans picked up where they left off last March, beginning with the timeless "Let’s Go Islanders!" chant, then detouring into the "Hey, Josh Bailey" song.

But things went awry during an awful second period in which the Flyers scored thrice, and some fans booed as fake crowd noise piped in to enhance the atmosphere seemed to get turned up a notch.

Then, during a frenetic final 12:07, people got some of their money’s worth, including three "Yes! Yes! Yes!" chants as Michael Dal Colle, Sebastian Aho and Oliver Wahlstrom scored to tie the game.

A late mistake allowed the Flyers’ Oskar Lindblom to win it with 2:22 left, but at least the comeback was something by which to remember the night.

Bailey said of the fan support, "It’s been great. Even when they haven’t been here, we’ve felt it. Tonight, we certainly fed off it in the third period.

"To have that energy after a big play, a big goal, I think becomes contagious. For some of us it was the first night we’ve had our families in the building, so I think a lot of us fed off that, too."

"It did," he said. "The fans are great. We didn’t give them anything to get excited about, especially in the second period, but in the third they were good."

The Islanders were doing fine at the Coliseum without fans – before Thursday they 12-0-2 there – but they prefer to have supporters back for the stretch run.

"What makes the Island special are the diehard fans, the passionate fans," Trotz said before the game.

Islanders fans are no more worthy of such opportunities than their counterparts for other local teams, but their circumstances are unique.

That is because the clock is ticking on the Coliseum, which depending on how far the Islanders go in the playoffs could have as little as two months left as their home.

So it would have been a pity had fans not had one last chance to say goodbye. The trick now for the Islanders is to keep playing long enough to get more of them into the building deep into spring.