Jordan Eberle #7 of the Islanders celebrates with teammate Anthony Beauvillier #18 after scoring a goal against the Florida Panthers during the third period in Game Two of the Eastern Conference Qualification Round prior to the 2020 NHL Stanley Cup Playoff at Scotiabank Arena on August 4, 2020 in Toronto, Ontario. Credit: Getty Images/Andre Ringuette/Freestyle Photo

Jordan Eberle had the puck a few feet in front of the Panthers' goal, and he waited.

Defenseman Brady Keeper went down, then got up, and Eberle waited.

Goaltender Sergei Bobrovsky tried to decide where to locate himself in the crease while Anders Lee disrupted things in front, and Eberle waited.

The Blue Jackets and Maple Leafs, scheduled for the 4 p.m. game at Scotiabank Arena in Toronto, looked at their watches, wondering whether they would start on time, and Eberle waited.

Finally, with Keeper and Bobrovsky both properly discombobulated, the right wing fired the puck past the goalie’s unguarded stick side.

Thus, with 3:33 left in the second period, the Islanders went ahead, 3-2, their first lead in Game 2 of the teams’ qualifying round series on Tuesday, en route to a 4-2 victory and a 2-0 lead in the best-of-five contest.

Eberle scored the fourth goal, too, when Anthony Beauvillier’s shot caromed in off his left shin.

“Pully [Ryan Pulock] made a really good pass through the seam and I think out of the corner of your eye you have a goalie like Bob, he gets over pretty quick,” Eberle said of the go-ahead goal. “You either have to get it off quick or you have to be patient. I was lucky enough to just bide my time and get around the D-man and throw it in. 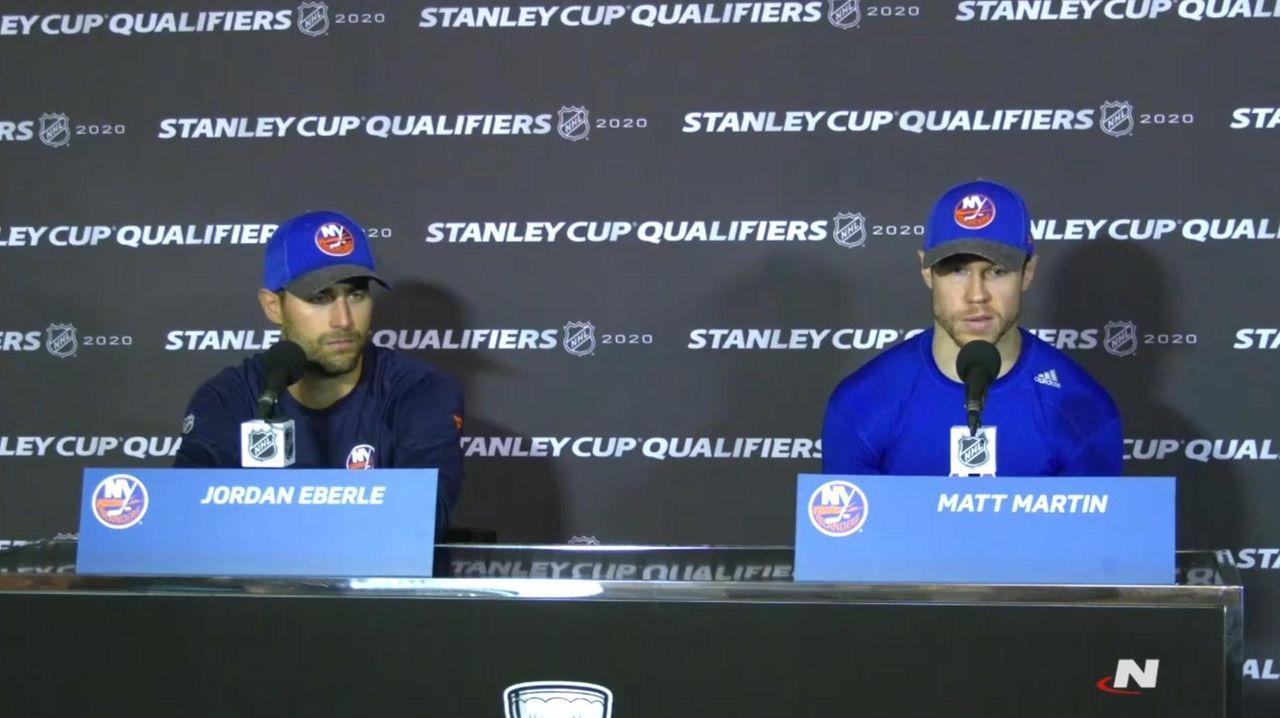 “But Bob’s such a good goalie getting across and being quick enough to beat you there, you never have a clean shot against him. So when you do, you have to make good of it.”

Coach Barry Trotz said Eberle is the sort of top-flight forward who knows how to be patient.

“They don’t panic,” he said. “They’re able to slow things down with the puck, and he saw there wasn’t a lane, he held on, he held on, and then found a lane and he buried it.

“Those players understand the game very well, understand time and space, and they are able to slow it down when everything is a little more chaotic.”

While Eberle’s goal was important in the short term, it had larger implications, because the Islanders need him, in particular, and his line, in general, to produce if they are to make a deep run in the Toronto bubble.

Eberle, 30, signed a five-year, $27.5 million deal as a free-agent-to-be in June of 2019, after having scored a goal in each game of the Islanders’ first-round playoff sweep of the Penguins.

That was important because he arrived with the Islanders in 2017 having scored no goals in 13 playoff games with the Oilers.

Now he has six goals and five assists in 10 playoff games with the Islanders and is one of five players in team history with six or more goals in his first 10 Islanders playoff games.

After a quiet Game 1, the top line of Eberle, Lee and Mathew Barzal knew it had to do more in Game 2, and it did.

“I looked at our first game, and it definitely was a quiet night,” Eberle said. “We didn’t really give up much, but we didn’t create a lot. Tonight, we really wanted to make an impact.

“Barzy does such a good job of coming through the neutral zone, creating time for us, and Lee-sy is just such a bull down low on the puck. He doesn’t get enough credit for how he holds onto the puck and wins battles and frees that time for Barzy and I.

“Yeah, it was good to see us start to contribute a little bit and create some offense and keep it going.”

On Tuesday, Eberle’s patience was key. But now there is no time to wait. Game 3 is Wednesday.

Isles vs. Panthers Game 2 photosThe Islanders play the Florida Panthers in Game 2 of their NHL qualifying series in ...

Brown back for Nets, but Nash going with Bembry against Suns
Burks starts for Knicks at point with Rose out, Kemba resting
Suns race out ahead and defeat Nets for 16th straight victory
Knicks' Burks, bench provide spark in win over Hawks
St. John's pulls out win over NJIT in OT
Gross: Should NHL have postponed Isles games earlier in outbreak?
Didn’t find what you were looking for?