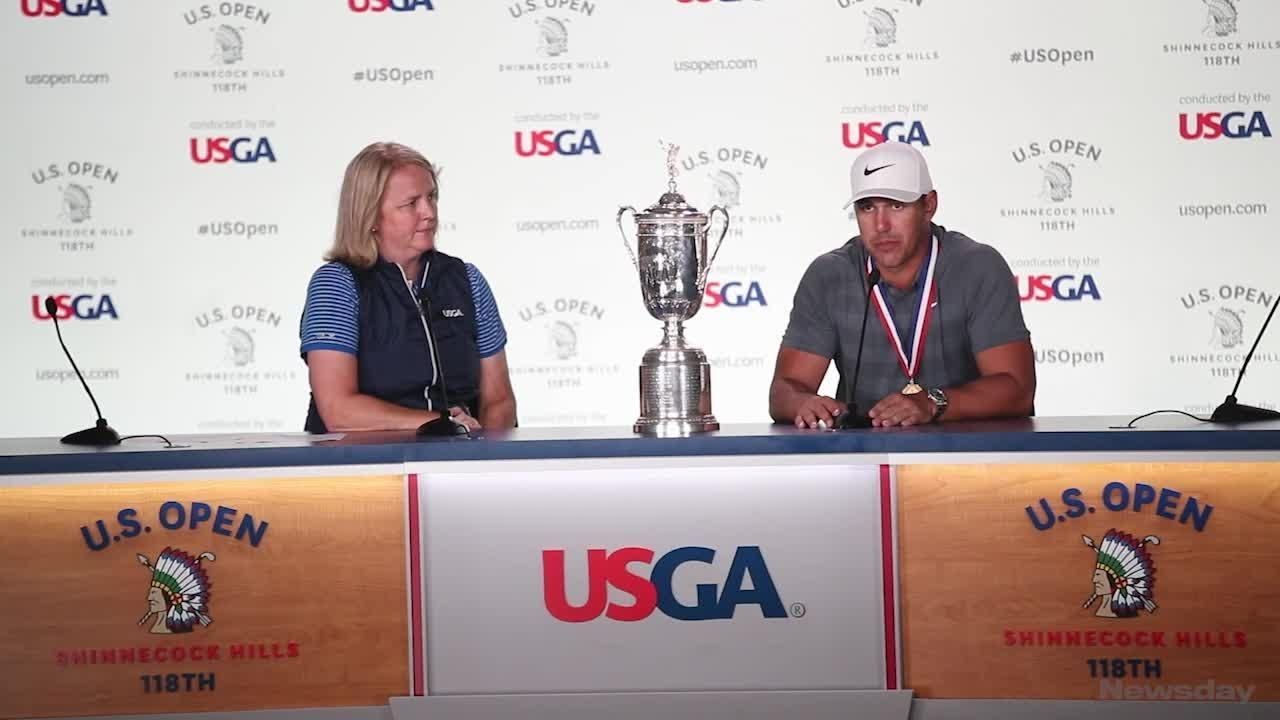 Becoming only the seventh person in history to win a U.S. Open two years in a row, Brooks Koepka reflects on his key moments on the course that brought about his championship on Sunday, June 17, 2018. (Credit: Newsday / Raychel Brightman)

There really is something better than being in a class by yourself. It is an even greater honor to be part of an elite, neat group. Brooks Koepka stepped way up in class and will be there forever because he got to put his name on the U.S. Open Trophy a second time in a row.

Only seven men ever have done it, and no one had done it in Koepka’s lifetime until Sunday at Shinnecock Hills. He became the first to win back-to-back U.S. Opens since Curtis Strange did it in 1988 and 1989. The very same Curtis Strange, now a Fox TV reporter, who walked 18 holes with Koepka on Sunday and will continue to accompany him in golf history.

“It was a pretty cool moment to have Curtis there, calling the shots. It was cool to have him in the group, and to have him right there when I was walking off 18 was really special,” Koepka said after winning the 118th Open at Shinnecock Hills, a year after taking the 117th at Erin Hills in Wisconsin.

Strange said, “I will say this. Last year, there was some talk that he won on a non-U.S. Open-type golf course setup. Wide, wide fairways. Is he really a U.S. Open player? He proved it today and all this week. He won on a classic.”

“I haven’t really thought about my legacy. That’s pretty cool,” Koepka said during his news conference, with the trophy on the table next to him, just as it was last June. “I remember Rich Beem was talking about how there’s only 280-some guys that have ever won a major. And once you keep doing it, once you win the second one, he told me it goes down a lot lower. Yeah, I think that’s pretty incredible to be a two-time major champion. I think that’s neat, man. It really is.”

A second major means a ton to golfers because there always is the thought that anybody can get lucky for a week. In recent years, every time a top star wins a major, the speculation is that the floodgates will open and more grand slam events will follow. But that rarely happens. Adam Scott, Jason Day, Justin Rose and Dustin Johnson — the current world No. 1 and Koepka’s close friend and partner in a twosome Sunday — have yet to win a second.

Winning a pair of U.S. Opens is a completely different category because the courses can be so different and so daunting. Heck, Shinnecock itself was different from Saturday to Sunday. The U.S. Golf Association whiffed on its wind calculation Saturday, leaving many players griping about the fast, firm setup. The USGA overcompensated Sunday, watering like crazy and placing pins in benign spots that you’d normally see on media day (side note: to this observer’s knowledge, none of the Saturday gripers complained that the course was too easy the next day).

The point is, Koepka took the good with the bad. He was calm and confident (“I think his confidence makes him calm,” said his father, Bob).

His swing coach, Claude Harmon III, said, “I told him the same thing I told him last year: Be who you are.”

So, just who is this 28-year-old repeat champion?

Well, by his own admission, he is not a “golf nerd.” He does not watch golf or study the history of which he is now part. He is a baseball nut, grand-nephew of former National League Most Valuable Player Dick Groat.

Koepka is a role model for his younger brother Chase, a player on the European Tour. Brooks was the guy who, while at Florida State, took time out from studies and golf to keep the family together when his mother (raising two kids on her own after a divorce) was diagnosed with breast cancer. She got through it, and Brooks includes her in vacations.

He is a loyal friend, according to Marc Turnesa of Rockville Centre, a former PGA Tour player. This past week, Koepka wore a white ribbon on his cap in tribute to Turnesa’s late father and ailing uncle. Turnesa insisted recently that Koepka will soon be No. 1 in the world.

As of Sunday night, Koepka is tops in the country and the newest member of a class that is richer for having him as a member.