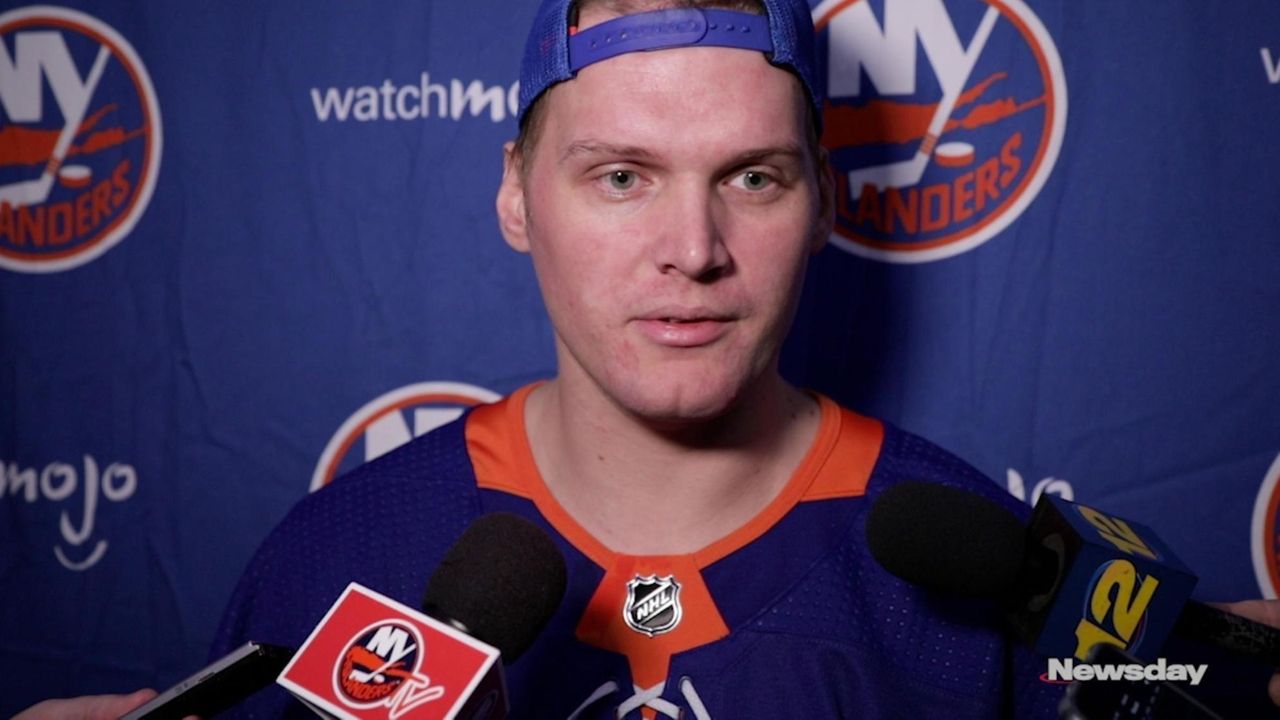 Islanders goalie Robin Lehner, who joined the team in free agency, recently opened up about his battles with mental health and addiction issues. On Thursday, he spoke about looking forward to his new team and a new season in light of those issues. Credit: Newsday / Yeong-Ung Yang

On the very first day of training camp, before even one practice, the Islanders’ new goalie felt as if he had already made it through the most grueling part of the season. Robin Lehner shed the burdens he had been secretly carrying for years. He announced that he has bipolar disorder along with problems with addiction and he vowed to finally play a season while sober.

“It’s just my reality, my truth,” he said during media day Thursday at Northwell Health Ice Center. “A lot of things happened this summer and obviously I’m starting over in a new organization. I had to take a step backward to take a few forward.”

Here is what happened this summer: Lehner acknowledged that he had a breakdown last season with the Sabres, having had suicidal thoughts and realizing, “I could not stand being alone in my brain.” He went through alcohol rehab and swore off the pills he had taken when drinking wasn’t enough. He signed as a free agent with a team desperate for goaltending help. He had heart-to-heart talks with new general manager Lou Lamoriello and new coach Barry Trotz.

Then Lehner brought a thunderclap to the first official day in the Islanders’ new, post-John Tavares era when he told his story in a lengthy essay in The Athletic then explained it some more to the media.

“It was extremely hard,” he said of his decision to go public. “The main reason I did it was, hopefully, I will help someone else, maybe someone in the league, maybe someone out there. It has been an emotional couple of days, but I feel good to have it out, ready to move forward and prepare for a fun season.”

How much fun it will be remains to be seen, given the state of the Islanders and the nature of his condition. The 27-year-old from Gothenburg, Sweden — a husband and father of two young children — will start with the first workout Friday and take it from there.

The Islanders’ season will depend a lot on how much they can rely on their goalie. Lehner has shown flashes with the Senators and Sabres, but many teams shied away from him because of what they saw was a hot temper and itchy personality. It turns out there were reasons for him being the way he was. “I’ve never felt better in my life,” he said Thursday. “Finally, I got diagnosed with something and I got medication for it.”

A goalie is a team’s backbone, especially a team that has lost its superstar and was not so hot to begin with. For starters, though, the team is telling Lehner it has his back. “Hockey is a safe place once you get in the [locker] room,” defenseman Thomas Hickey said. “It’s going to be on us as teammates to help him out and make sure he’s doing OK because I can’t imagine going through those things. It’s going to help him to have all of us on his side.”

Lehner’s revelation was the top topic in Trotz’ first formal news conference. “To me, it shows strength,” the coach said. “I know how I’ve been, I know Lou’s values and the organizational values that are now in place, it’s about the person first. If you get the person to be the best person he can be, he’s going to be a better player.”

Understanding from up above is a sign that a renowned disciplinarian like Lamoriello has a big heart. True, he has gone gruffly over the top in his rationalization about having lost Tavares, repeatedly saying, “Great players win some games, but great teams win championships”--as if you have to choose one or the other. Lou knows better. His success was built on great players such as Martin Brodeur and Scott Stevens.

But, as Matt Martin said after having played under Lamoriello in Toronto, “He is all about his players, all for his players . . .And every once in a while, you’ll get a smile out of him.”

Now, Lamoriello is fully backing a huge goalie (“Very intimidating,” new teammate Anthony Beauvillier said, smiling) who is determined to finally be happy. “This is a day-to-day battle for me,” Lehner said. “I’m looking forward to it.”