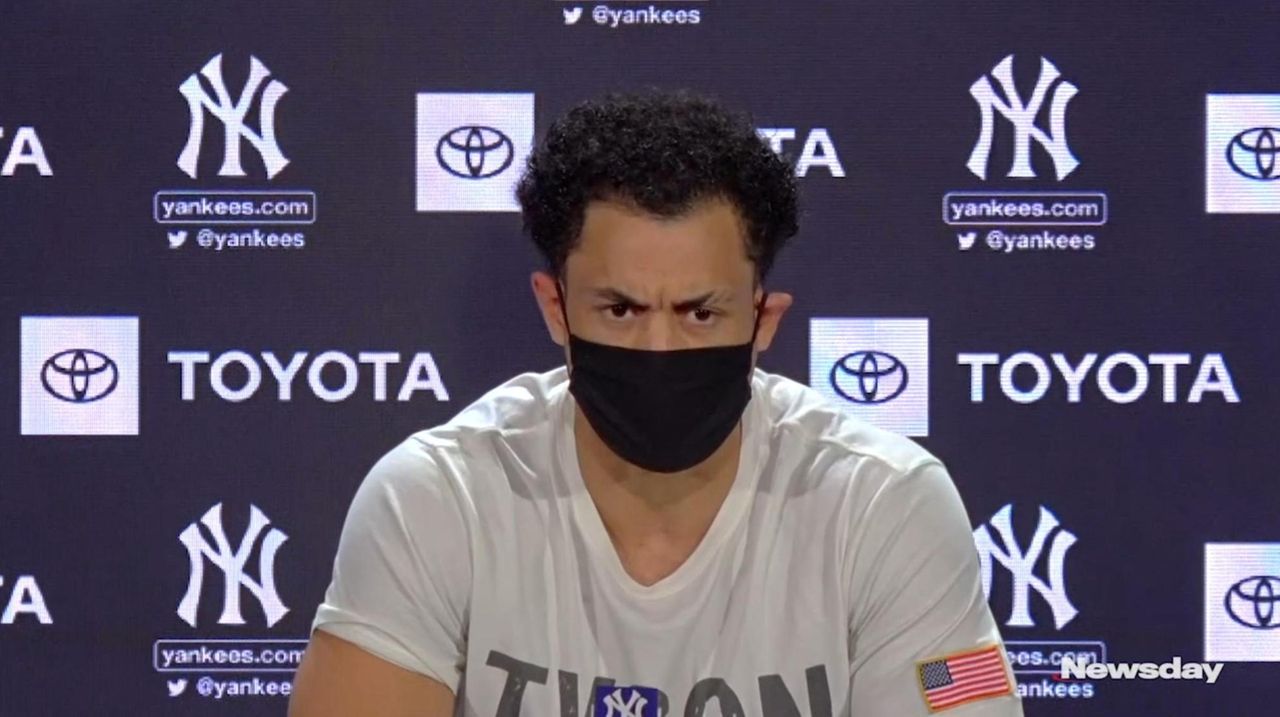 Outfielder Giancarlo Stanton addressed the media in a news conference before the Yankees-Red Sox game at Yankee Stadium on Monday to discuss his status while recovering from a hamstring injury.  Credit: NY Yankees

Sitting on a Zoom call with a mask covering his face, you might think it would be easy for Giancarlo Stanton to hide his frustration as he detailed the progress of his strained left hamstring, the latest in a long line of injury rehabilitation efforts.

But somehow, even with his expressions hidden, you can hear it and feel it. If you really want to know what his frustration looks like, don’t focus on the eyes glaring above the black mask. Instead, take your own mask off and walk to the mirror. He sounds like every Yankees fan. He is you.

“So just hold on tight, you know. I’m working, There’s nothing for me to do but work to get back and keep a positive mindset. As repetitive as that sounds or might seem, there’s no positivity or nothing benefiting in being negative or bringing people down around me for it.”

It does sound repetitive because it is just an alarming, frustrating, unfortunate series of events that have left him sidelined for too much of what has been a career with nearly as many what-if’s as there are highlights.

You almost forget that he played 158 games in his first season in New York in 2018 and 159 in his final, 59-homer season with the Marlins thanks to the procession of bumps, bruises and tears last season. He was limited to just 18 games thanks to a left biceps strain, left calf tightness and then a right knee strain. At 30 years old and with a history that reads almost like a tragedy — hamstring strain in 2013, hit in the face by a pitch in 2014, a broken bone in his hand and another hamstring injury in 2015, he considered all of this, too.

He dropped approximately 20 pounds over the winter, trying to lessen some of the muscle he carried on his 6-6 frame. But he encountered the same troubles already - a calf strain early in camp that sidelined him for the bulk of work before the preseason was shut down. And after returning healthy with the abbreviated camp for the start of the season it took just two weeks before he was on the injured list again with this latest injury.

“I had a lot of time to think over last year,” Stanton told reporters just a few games into this shortened season. “I just wanted to cover all my bases. I tried to figure out what was the best way for me to stay on the field. What's the best way for me to progress? I thought I'd give this a try and be closer to the weight of my younger years.”

But the effort has been like most things he has tried — just met with frustration.

“Words can’t really describe the disappointment I’ve had over this, but I can’t dwell on it,” Stanton said on the Zoom call Monday. “I have to see what’s in front of me, that’s still a decent amount of the season and the playoffs. It seems unreal at times, but I can just push forward and root my guys on until I’m back.

“It’s been tough to be honest. This is my life. I put a lot into this. You know, it’s unbelievable. So you’ve just got to look at it for what it is, the spot that I’m in. It’s a tough spot. But people have been in worse, there can always be light at the end of the tunnel so you’ve got to keep positive, got to keep moving forward. The mindset helps you come back as well.”

No amount of happy talk from Stanton will mask what he has gone through. And no amount of vitriol from frustrated Yankees fans will be any harder on him than he is on himself right now.

Yankees' Stanton being dogged by label of injury proneThe 30-year-old outfielder, who was off to a good start at the plate, is aware of how he's viewed by much of the fan base.