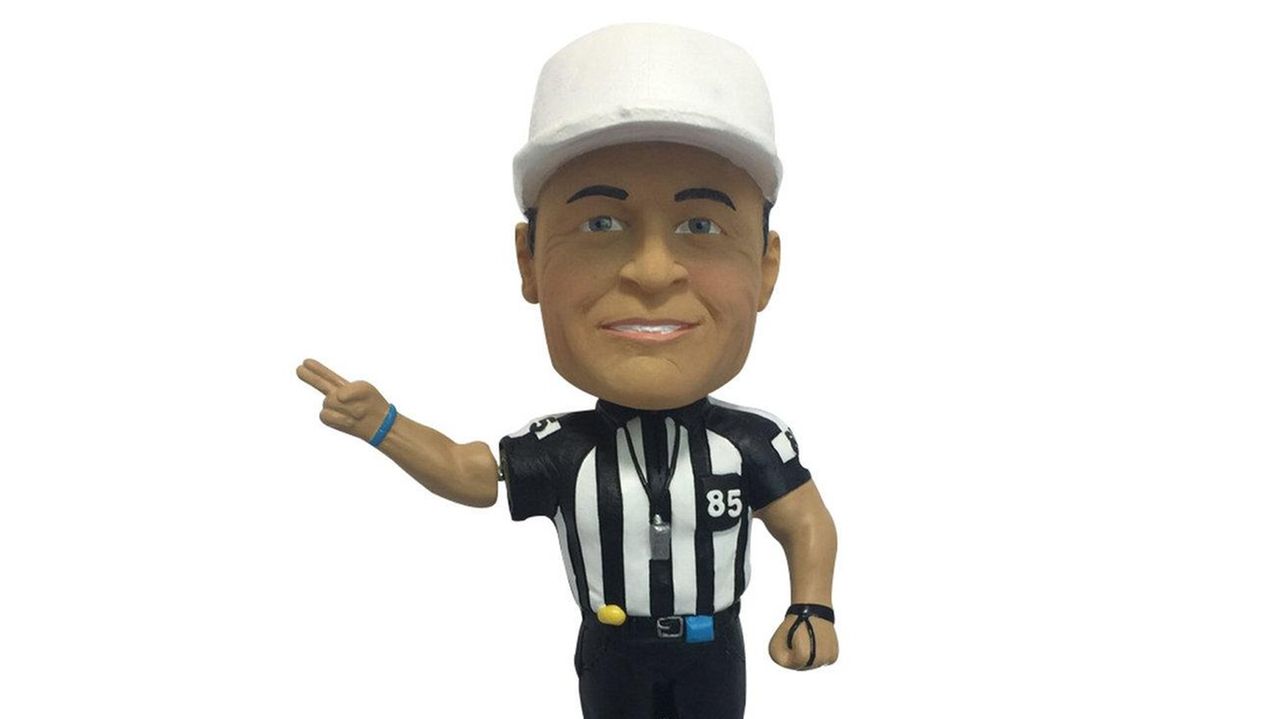 One of the NFL’s most popular referees has been immortalized with his own bobblearm. Yes, a bobblearm. (And bobblehead, too, for all you purists.)

Ed Hochuli, who officiated for 28 years before retiring at the end of last season, now has his own bobblehead at the National Bobblehead Hall of Fame and Museum in Milwaukee.

The figurine depicts Hochuli, in his No. 85 referee uniform, signaling a first down. Hochuli’s head bobbles, as bobbleheads do. But in honor of Hochuli’s muscular arms – which were the subject of widespread internet fame and earned him nicknames such as “Hochules” – the bobblehead’s right arm also shakes.

The bobblehead also has sound clips that play audio of his on-field calls – again, another Hochuli tribute, this time to his penchant for explaining calls in a clear, comprehensive and sometimes verbose manner.

The bobblehead was produced by the National Bobblehead Hall of Fame and Museum and isn’t affiliated with the NFL. It is available for purchase from the Hall of Fame’s online store for $33 ($25 each plus a flat $8 shipping fee). In addition, Hochuli will direct his $5 proceeds from the sale of each bobblehead to be split between Autism Speaks and the TJR Foundation, according to a release issued by the Hall of Fame. Only 500 have been made, and each one is individually numbered.

"When we heard that Ed was retiring, we knew that a bobblehead would be a fun item for his fans and collectors, so we reached out to him to pitch the idea,” Phil Sklar, co-founder and CEO of the National Bobblehead Hall of Fame and Museum, said in the release. “We were glad he liked the idea and charity component and think the many football fans who became fans of Ed after seeing him on TV for so many years will enjoy having his bobblehead.”

Hochuli, a Milwaukee native, began officiating in 1990 and was the NFL’s longest-tenured referee for a decade after Gerald Austin and Larry Nemmers retired following the 2007 season. He also has been an attorney at Jones, Skelton & Hochuli, P.L.C. since 1983. Hochuli played college football for four seasons at UTEP and refereed two Super Bowls. Hochuli tied Mike Carey in a 2008 ESPN poll of NFL coaches to determine the best referee, was chronicled on the NFL Network's Six Days to Sunday in 2005 and was featured in the Madden NFL video game franchise and on the cover of Sports Illustrated.

Barker: Vaccinated or not, Irving is a distraction for Nets
Evan Engram No. 1 target of . . . frustrated Giants fans
Jason Garrett to keep calling plays for the Giants' offense
Saleh confident that the Jets will turn things around
Yankees' next tall task: Vlad Jr. and the Blue Jays
Glauber: Jets and Giants are simply the worst
Didn’t find what you were looking for?