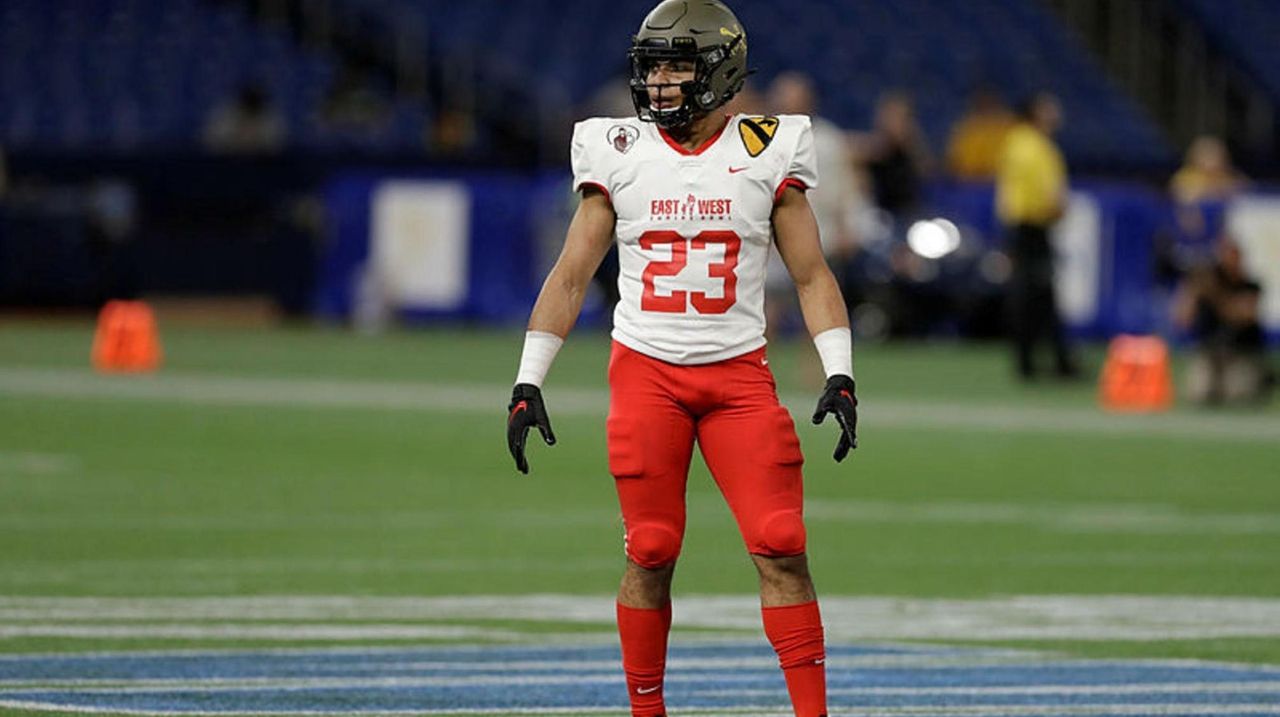 Army senior defensive back Elijah Riley, a Newfield High School alum, is training for his shot at the NFL. On Monday, March 9, Riley talked about continuing his senior semester at West Point and training when he can. Credit: Newsday / Tom Rock

Way at the back of the line, Elijah Riley started telling those around him that he was going to say something. He was going to ask about it. And as they got closer and closer, there was a bit of a buzz surrounding the Army football player as his teammates smiled and wondered if he would actually go through with it.

Then he got to the front of the line. In the Oval Office. He shook hands with the president. And he did it.

Donald Trump recoiled a bit. “What?” he said loudly.

“And the whole room goes dead silent,” Riley said. “Like I’d just said the worst thing ever to the president.”

He hadn’t, though. What he’d done was point out that athletes who attend military academies — such as Riley and those other football players who were at the White House to be honored for winning the Commander-in-Chief’s Trophy for the 2018 season last spring — could not pursue a career in professional sports immediately after they were commissioned at graduation. They had to fulfill at least part of their active-duty service obligation before they could turn pro.

It's a hotly debated policy that has changed over the years, with the door opening and closing at various times.

The Obama administration had opened it, which allowed players such as Navy quarterback Keenan Reynolds to be drafted by the Ravens in the sixth round in 2016.

When Riley stood in front of Trump, however, the door was closed and had been since then-Defense Secretary Jim Mattis, in an April 2017 memo, said service academies “exist to develop future officers” and that graduates would serve as “full-fledged military officers carrying out the normal work and career expectations” of someone who received an education at the taxpayers’ expense.

“Sir,” Riley said to Trump, taking advantage of his photo op that lasted just a matter of seconds, “is there any way we can get a waiver to go play right after graduation?”

Riley said Trump was aghast and said he did not know the current policy.

“And right there in the Oval Office he got to talking with Coach [Jeff] Monken, General [Darryl] Williams [the superintendent of the United States Military Academy], he brought his lawyers into the room, and it was like boom-boom-boom,” Riley said. “Then he said: ‘We have to make this happen . . . You guys are playing.' ”

And just like that, a 20-year-old kid from Port Jefferson, the son of a sanitation worker and oldest of five children, a three-sport athlete at Newfield High School who went on to play for Army, changed the thinking of the Defense Department.

About a month later, in June 2019, Trump directed the Pentagon to create a new policy that would allow the direct transition from academies to professional sports.

In November 2019 — right in the middle of Riley’s senior season — Secretary of Defense Mark Esper signed a memo with new guidelines that allow such academy graduates to either delay their military obligation or repay the cost of their education.

It might as well be called the Riley Rule.

“I was kind of kidding,” Riley said when recounting the exchange with Trump. “But obviously, if I was going to ask anybody about this, it would be the president because he could make it happen. It was all unfolding in front of me and I was like ‘This is cray-zy!’ ”

Riley thought he was clearing the largest logistical hurdle he’d face in fulfilling his dream of playing in the NFL. Now it was just a matter of having a strong end to his senior season (check), performing well at the East-West Shrine Game (check) and opening some eyes when the pro scouts came to see him at his . . .

Uh-oh. Another roadblock. This time, though, there seems little chance of changing the rules, pleading a case or getting dispensation. At least not with the draft six weeks away.

Riley will spend this Tuesday the way he has spent most days the last few weeks, trying his best to get ready for the NFL in the midst of a pandemic. The gyms are closed, his college campus is closed, and he is scrounging for ways to make himself stronger and faster.

This was supposed to be his Pro Day.

Now it's just another Tuesday.

Like many parts of the sports calendar, the NFL’s annual pre-draft process has been obliterated by new guidelines aimed at slowing the spread of the coronavirus. For the last two weeks or so, that has meant no visits to team facilities, no in-person interviews for prospects . . . and no Pro Days.

“I’ve been working my butt off for this,” Riley said of his now-expunged job interview, which was to have taken place on the now-closed campus at West Point.

For players such as Riley, not among the 300 or so who attended the NFL Combine in February but on the fringes of the league’s annual nationwide search for talent, the Pro Day is an indispensable opportunity.

It’s a chance to showcase skills, meet with scouts in person, shine as a potential hidden gem and, for the lucky ones, convince one of the 32 teams that they can play pro football.

“I’ve had my fair share of bumps in the road,” Riley said. “This is just another one in my way toward getting on a team, so I’m not allowing this to deter my mood or anything. I’m trying to stay positive.”

Riley has the benefit of having played at the East-West Shrine Game in January and lining up at three positions: safety, cornerback and edge rusher. He said his tape from Army “speaks for itself,” including a standout performance in an overtime loss to Michigan last fall in which he had 13 tackles and two sacks and forced and recovered a fumble.

He is built like an NFL player at 6 feet, 205 pounds, but he wanted to use his Pro Day to answer what probably is the biggest question regarding his potential: Speed. That meant running a good 40-yard dash.

It’s why he’d spent every weekend since January getting a “trip section” that allowed him to leave the base at West Point and train in New Jersey. It’s why he’d spring from his seat at the completion of his Sociology and Film class at 1:30 p.m. Fridays, dash to his room to change from his uniform into workout clothes, jump into his car and drive the hour or so to Fair Lawn to be ready for a 3 p.m. training session with Rich Sadiv at Parisi Speed School.

It’s why he was cramming a week’s worth of preparation into a 2 1⁄2-day span, running and lifting once on Fridays and twice a day on Saturdays and Sundays before sprinting back to West Point before he would be considered AWOL at 11:30 p.m. (he said he came close to that only once, making it inside the gates with 20 minutes to spare).

His agent, Long Island-based Alan Herman, contacted NFL teams to see if they were interested in a virtual Pro Day in which Riley could run and perform drills streamed online or shared via video. They were not interested in such demonstrations from Riley or anyone else. Such events are too easy to manipulate. For the NFL scouts, it doesn’t exist if it doesn’t take place in front of their own eyes.

“I have no idea how this is going to work,” Riley said. “We’ll see how this turns out.”

So he’ll find a way to train, as he has in recent weeks, and hope that what he already has shown NFL teams will be enough.