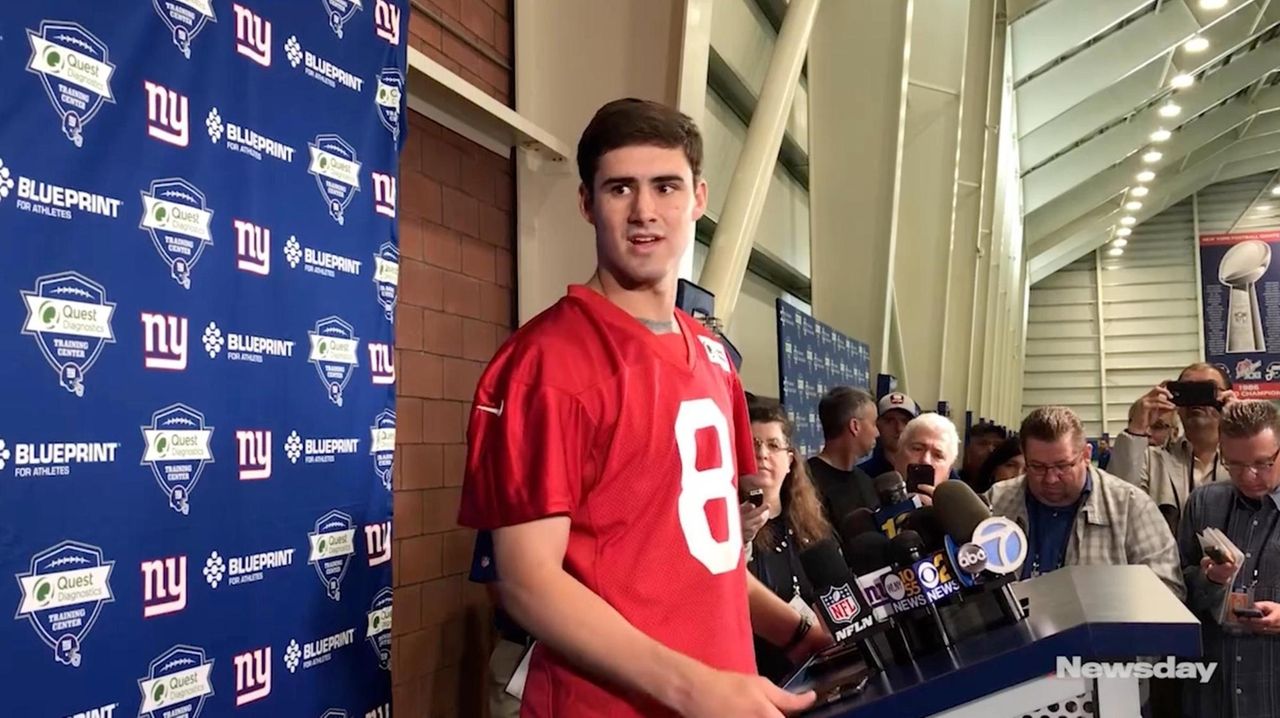 Anyone who walks into the Giants’ facility knows in an instant whose house it is. With two Super Bowl trophies in the lobby and multiple murals plastered on the walls throughout the building — including one etched into the glass doors of the cafeteria staring down any visitor who enters through the front doors — the entire complex can feel like a shrine to Eli Manning.

He’s the most prolific and successful quarterback in franchise history, and when he takes the field in September, he’ll be the first player to wear the team’s uniform for a 16th season. When the facility was built and designed in 2010, Manning was the undisputed face of the Giants.

Most times, those Manning  images serve as inspiration to new players who arrive ready to stake their own claim to glory with the Giants. It’s usually a reminder, especially for draft picks who grew up watching him play, that they are expected to carry on a certain legacy.

But what if it’s your job not simply to go along for the ride with Manning but to eventually replace him? What if you are the first player drafted by the Giants in more than a decade and a half whose personal success is designed to come after Manning’s time with the team ends? Imagine how daunting that might be?

That was the case when Daniel Jones arrived for his rookie minicamp with the Giants on Thursday. Instead of being dwarfed and intimidated by the constant Manning reminders, though, the sixth overall pick walked through his new office with one question on his mind: On which wall will they be putting my pictures?

Jones, in his first in-person appearance since being drafted last week, set a high bar for himself and his tenure with the Giants.

“I think the goal is to win Super Bowls,” Jones said on Friday. “There is no doubt about it, that’s the goal, to win multiple Super Bowls like Eli has. I think Mr. Gettleman, Coach Shurmur, certainly Mr. Mara and Mr. Tisch, they all expect that.”

He apparently does, too. “I’m looking forward to that,” he said.

Jones certainly has his doubters. Few Giants draft picks have received as much scrutiny as the one used to select the quarterback of the future. Jones walked to the podium on Friday in the midst of that maelstrom and calmly answered every question. There were times when he even sounded like . . . Manning.

“It’d be hard to be completely unaware of all that stuff,” Jones said of the fiery debates over his selection. “But I don’t focus on it. There’s a lot to focus on, a lot to learn for me right now, being here, learning the offense, trying to pick up a lot of stuff. I’m not sure I can afford to be focusing on those kinds of things.”

He also said he was hoping he would be selected by the Giants because of the connection he felt with the coaching staff during his pre-draft meetings with them. With that, however, came days such as Friday, when he stood in front of an army of cameras and reporters waiting to grill him. It’s a package deal.

Pat Shurmur said he thought Jones did a “good job” at the afternoon practice that served as his on-field debut with the Giants.

“Time will tell, but this is a very accomplished, very talented, very smart young man who gets it,” Shurmur said. “He worked extremely hard yesterday and today.”

As for Jones’ relationship with Manning, it may be overhyped. Yes, they shared a college coach in David Cutcliffe. Yes, they spent time together at the Manning Passing Academy and at Manning’s annual preseason training sessions at Duke. And yes, Jones has turned to Peyton Manning for advice throughout his college career and the draft process. But Jones and Eli Manning have spoken only once in the week since he was drafted, Jones said.

“He congratulated me, told me he was excited to be teammates, and I certainly feel that same way,” Jones said. “I’m looking forward to spending time with him and learning from him.”

And, ultimately, replacing him. Finding his own place on the walls of the team’s practice facility. Those are goals for down the road a bit. Perhaps the trickiest task for Jones this rookie season will be not allowing that dynamic with Manning – old man time and baby new year – to sour whatever relationship they have.

“We both want the same thing,” Jones said. “We want the Giants to win football games, and that’s the goal of everyone here. I’m certainly going to let that be known that that’s my goal. However that happens, whatever the plan is, I’m here to do that. I understand my role is to learn from him and I’ll certainly be focused on improving myself every day and making sure I’m improving, but at the end of the day, we want to win. If that’s the mindset, we’ll be good.”

Maybe the Giants will be too.

Dainel Jones: Zion Williamson is 'a special guy'A first-round draft pick from Duke may not be what Giants fans were hoping for. ... Ximines confident he can live up to new nicknameWhen Pat Shurmur called Oshane Ximines a week ago to tell him the Giants would ...