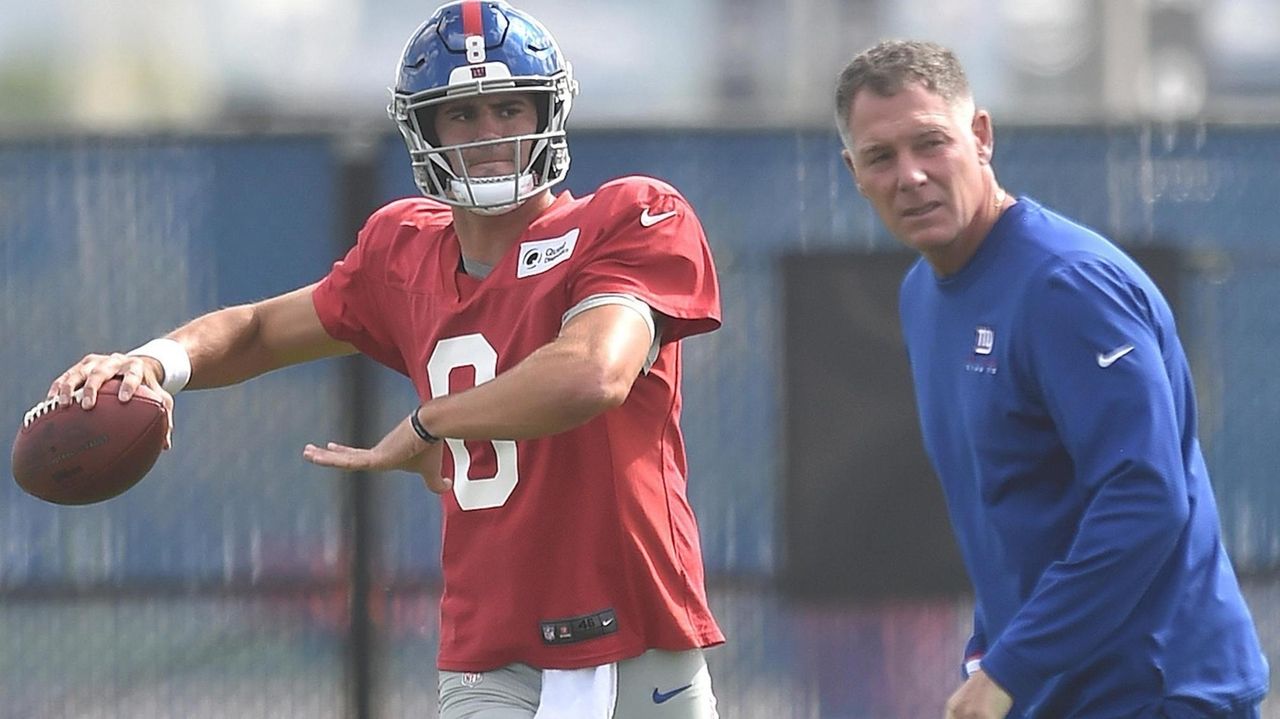 Two weeks into an 0-2 season, Giants head coach Pat Shurmur made the move to bench quarterback Eli Manning and hand 2019 — as well as the future —over to Jones. He’ll make his first start on Sunday against the Bucs. The two quarterbacks and their coach discussed the move on Wednesday, Sept. 18, 2019. Credit: Newsday / Tom Rock; Photo Credit: James Escher

Talking about replacing Eli Manning seemed a lot easier for Daniel Jones when it was a hypothetical. In the spring and summer, the rookie quarterback spoke confidently — almost brashly — about one day winning multiple Super Bowls and steering the franchise for years to come.

Then “one day” came.

On Wednesday, he had to talk about it in actuality… as the starting quarterback for the New York Football Giants. That, it appeared, was quite different. The weight of the task at hand was almost visibly pressing on him as he awkwardly searched for words, stammered, and uh-ed and um-ed his way through his news conference bearing his new title. He looked every bit the 22-year-old kid, just a few months removed from his Public Speaking 101 class at Duke.

“I’m excited,” he said of the opportunity that has become his much sooner than even he imagined it would. Two weeks into an 0-2 season, Pat Shurmur made the move to bench Manning and hand 2019 — as well as the future —over to Jones. He’ll make his first start on Sunday against the Bucs.

Who wouldn’t be excited? He’s waited his whole life for this chance.

The real question is: Is he ready?

“I certainly feel good about how far I’ve come in my preparation and my progress since I got here in the spring and through camp and through these first couple weeks,” Jones said. “I feel ready and I’m certainly looking forward to the opportunity.”

One person who wholeheartedly believes Jones is prepared for this is Shurmur. He’s the one who spearheaded the change after coming away from Sunday’s loss and evaluating the quarterback position (and likely comparing it with the mobility shown by the two opposing quarterbacks he faced). The front office gave him the latitude to make this decision at some point this season, and between Monday and Tuesday he took it. He ran it past general manager Dave Gettleman and co-owners John Mara and Steve Tisch, he said, before moving forward. They asked him if he was sure.

Guess what he said.

“We have a switch in roles,” Shurmur said on Wednesday. “Daniel’s our starter, Eli will back him up, and we’re moving forward … Daniel Jones is ready to play and we’re going with him.”

Because, Shurmur said bluntly, he is a better quarterback than Manning.

“We do everything we can to win football games and at this point we feel like he’s the guy we want to move forward with,” Shurmur said. “My gut told me it was the right time … We’re trying to win a football game and we feel like, along the way here, when Daniel Jones gets his opportunity, he’s going to play well.”

Shurmur and Jones both stressed how important Manning will be to Jones’ success in the coming 14 weeks. As the backup quarterback, Manning will be there to guide Jones through his in-week preparations and there on the sideline to talk through issues with the rookie.

“This guy is what a Giant exemplifies, not only as a player but as a person,” Shurmur said of Manning.

Manning smiled and said his initial words of advice to Jones were: “Throw it to the guy wearing the same jersey as you are. Simple.”

Jones said he and Manning had a conversation after Shurmur told them — separately — the plan moving forward. It was emotional, but a peaceful transfer of power. Immediately after that, they began watching video and getting ready for the Bucs. On Wednesday, they were on the practice field with the rest of the team. That’s when the change became real and Jones took the first-team reps.

Jones, of course, won’t be judged by how he handled himself on the practice field on Wednesday or in his first news conference as the starter. His trial begins on Sunday at 4 p.m..

As it does for the general manager who picked him sixth overall while keeping what has turned out to be the highest-paid and most decorated backup quarterback in the league.

And the coach who chose this week to insert him into the lineup, vouching for the rookie and attempting to salvage a season that is quickly slipping away.

“We all realize there is a lot of football left to play,” Shurmur said. “You get a little juice, you win a football game, who knows what’s going to happen.”

The Giants had four preseason games then had two "E-season" games. Now, with Jones in place, they're hoping to finally begin 2019 in earnest.

Glauber: Ever the consummate pro, Eli hands off QB jobThe 38-year-old made it clear he will not be a distraction for the rookie Jones and he will do everything possible to help the young quarterback. Eli's legacy? Greatest QB in Giants historyThough the past few seasons have been lined with turmoil, Eli Manning came through when the Giants needed him most. Jones replaces Manning as Giants starting QBTwo-time Super Bowl champion Eli Manning benched in favor of No. 6 overall draft pick Jones.