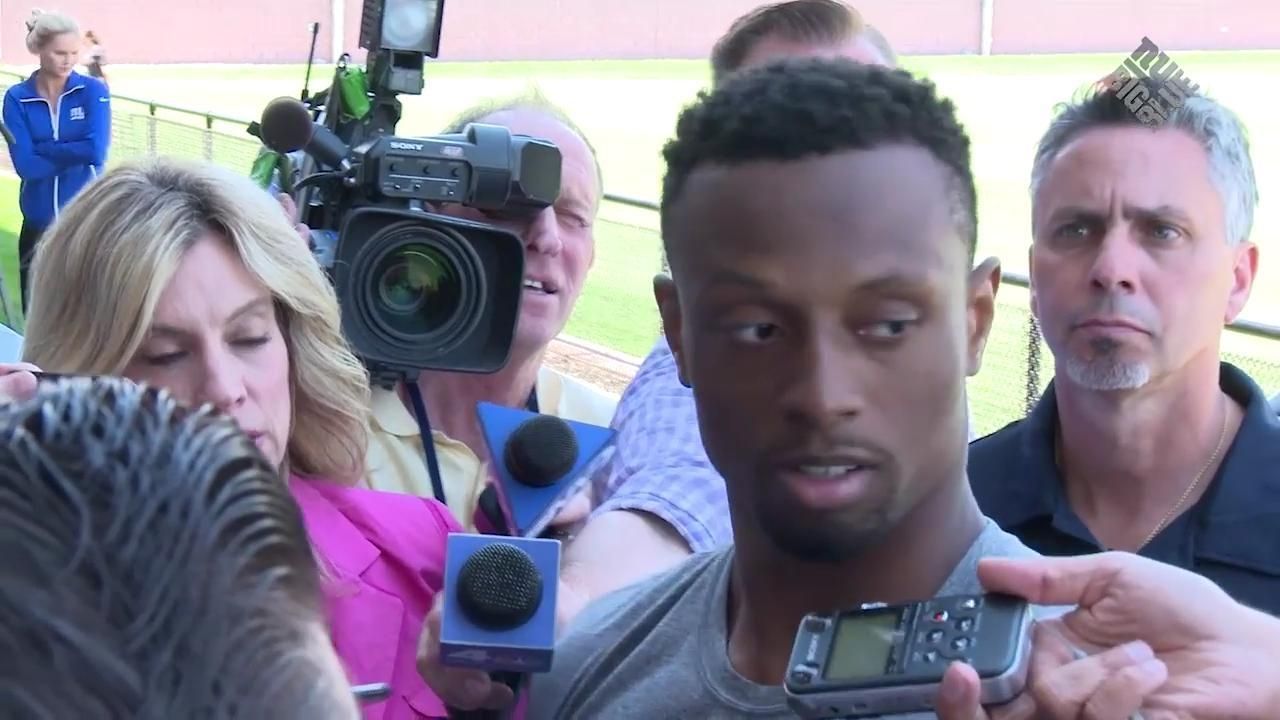 Giants defensive back Eli Apple talks about getting a fresh start with the Giants this season during an OTA on May 21, 2018. Credit: Big Blue Entertainment

If there was one player who personified the disappointment of the 2017 Giants’ season as well as the spiral that marked the end of that miserable campaign, it was Eli Apple. The second-year cornerback began primed for a breakout season, lost his starting job, and by Week 17 he was suspended for a run-in with a coach, called a “cancer” by teammate Landon Collins, and seemed to have worn out his welcome with the team.

What turned out to be the verbal punctuation on his season was a crude statement to the media about having to use the bathroom.

“Was I embarrassed? Of course,” Apple said on Monday. “Nobody wants to go out the way I went out. I mean, it was all over the place.”

That things went so sour so quickly for the team, though, may have actually worked to Apple’s benefit. It triggered the arrival of an entirely new regime of decision-makers led by general manager Dave Gettleman and coach Pat Shurmur, people who were not around for the dysfunction. And one of their first moves as a tandem was to give Apple a chance to stick around. With a fresh start.

“You hear things,” Shurmur said on Monday of Apple’s antics, “but I’m sure glad that I truly believe in a clean slate. He’s been nothing but professional, he’s been out here competing, he’s one of the guys that has been here almost every single day and I haven’t seen anything that somebody might have thought I heard. He’s been great.”

It’s been a conscious effort by Apple to be that way.

“I’m just trying to be a better player, a better person, and a better teammate this year,” the third-year cornerback who was the first-round pick in 2016 said after Monday’s OTA practice. “Obviously with the stuff that happened, I just want to continue to work on myself and just communicate better and just not let certain stuff get to me. Continue to strive and get better every day.”

To get to that point, Apple said he’s “just cleared my head and talked to the guys I needed to talk to, the veterans, speaking to the coaches and spending some good quality time with good people.”

On the field, Apple said his 2017 season was “up and down,” but the Giants still believe in his abilities.

“In terms of his stature, his skill set, yeah, he’s what you’re looking for,” Shurmur said.

That’s why he’s getting this second chance.

“What you’re trying to do is inspire these guys to play at their best and I hear things, but I can’t truly say I know exactly what happened because I wasn’t here,” Shurmur said of not only Apple but other personalities and problems that have carried over from last year. “But I do know this: There are guys out here that are very prideful, they’re very professional, and they want to do really good things. Eli is one of them.”

Apple seemed to admit he lost his way in 2017, but said he never lost his confidence. That remains high.

“I think I can be a great Pro Bowl player,” he said. “It’s just about every day going about my business and being a great player every day and being consistent.”

As for self-improvement, Apple said that remains a work in progress.

“I think I’m growing every day as a person,” he said. “I think I’m a 22-year-old guy, just ready to get to work and continue to work hard and just build on that.”

No secrets between Isles and Penguins, first-round opponents
A look back at the Isles-Penguins regular-season series
Barker: Surging Knicks face a key road game vs. Lakers
Isles fall to Bruins in OT, will face Penguins in first round
Rangers' Zibanejad says slow start was due to COVID
Casey Cizikas is Islanders' nominee for Masterton Trophy
Didn’t find what you were looking for?