When Jake Carlock jumped to deflect a pass in Thursday’s preseason game against the Jets, his father, Don, jumped just as high from his seat at MetLife Stadium.

As Jake Carlock caught the tipped ball for an interception and sprinted toward the goal line, Don Carlock’s heart raced just as fast with pride and joy.

And when Jake Carlock crossed the goal line for a touchdown and flipped the ball in the air to celebrate his accomplishment? 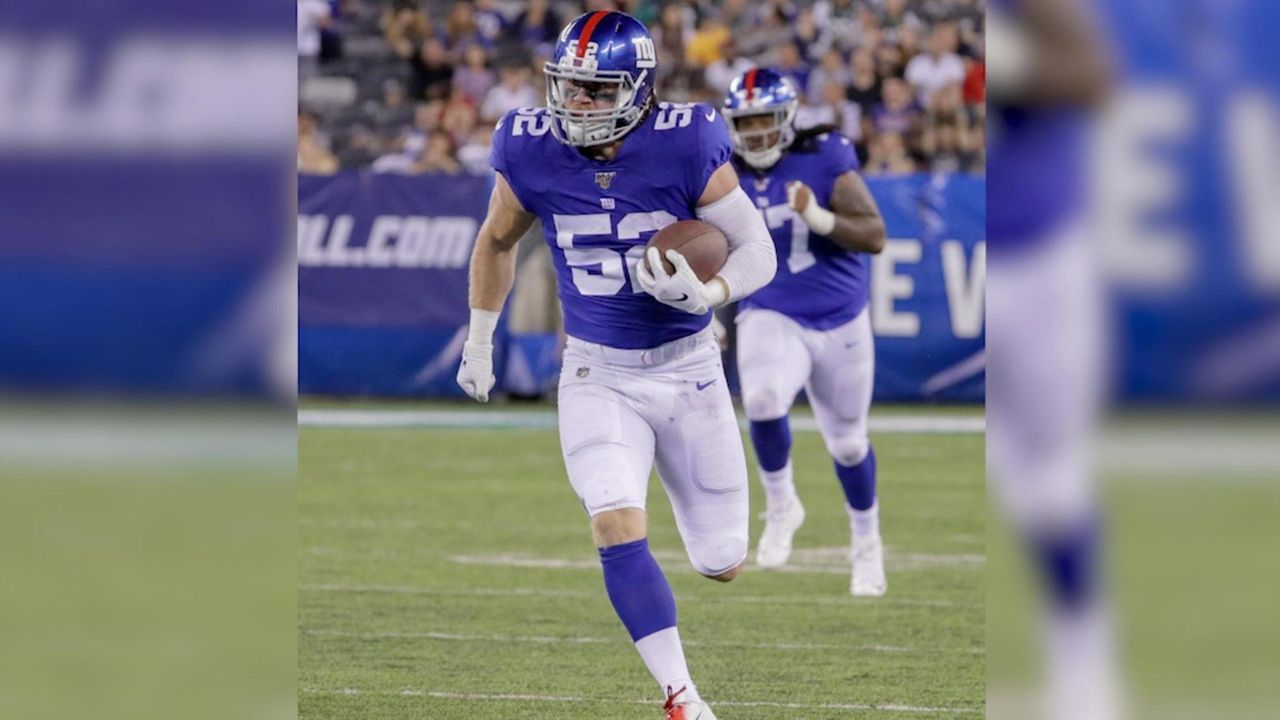 LI's Carlock and O'Hagan discuss their first NFL game Babylon High School and LIU Post alum Jake Carlock, playing in his first NFL preseason game along with Seaford’s James O’Hagan, intercepted a pass and took it in for a touchdown in the Giants’ 31-22 win over the Jets at MetLife Stadium on Aug. 8, 2019.  Credit: Newsday / Nick Klopsis, Casey Musarra

From now on, that will be Don Carlock’s job.

The Giants were off Saturday, which gave Jake Carlock, the rookie linebacker who splashed onto the NFL scene with that 59-yard pick-6, time to drive home to Babylon with a special delivery.

Someone on the team’s equipment staff was able to track down the football for Carlock and left it in his locker. He then walked up to his childhood home with the football from that play tucked beneath his arm.

The football’s final destination? “I gave it to my Pops,” Jake Carlock said.

“I got it, I got a ball!” Don Carlock told Newsday on Sunday afternoon. “We put it up in the trophy case.”

What better way to cap a memorable weekend for the Carlocks than with such a piece of memorabilia. And while Jake was back at work Sunday practicing with the Giants, continuing his unlikely push to make the 53-man roster later this month, his large family on Long Island was continuing the party that began when they left MetLife Stadium on Thursday in two buses.

“That was nuts,” Don Carlock said of Jake’s interception and return. “It started off a whole weekend of celebrating and enjoying it.”

So, too, was his community. Babylon had always followed Carlock’s football exploits, from his days as a star at the high school to Stony Brook University to LIU Post to his shot at the NFL with the Giants. Thursday’s play, though, brought civic pride to a whole new level.

“We can’t go anywhere in our little village now,” Don Carlock said. “You walk down the block and it takes an hour. But it’s a lot of fun.”

Said Jake Carlock, “Honestly, I feel like every person I’ve ever met in my life reached out to me and it was pretty cool. I tried my best to get back to everyone because I’m just enjoying the moment right now. But I knew that coming back Sunday, I just had to get back to work.”

It’s one thing to enjoy the ride. It’s another to prolong it.

“It’s something I’ll remember for the rest of my life for sure,” Jake Carlock said of the whirlwind after Sunday’s practice. “I’m happy. But I won’t really be happy until I make the team.”

He was more critical of his play on Thursday than impressed with it. He even noted that on the interception return, the only reason he was able to bat the pass in the air in the first place was because he was unable to get around the Jets’ tackle on his pass rush.

“I wasn’t even sure if I was going to get into the game,’’ he said, “and I think a play like that, it’s pretty cool and it definitely makes me feel more comfortable. Then coming out, I was just excited to get to work, honestly. It was a cool two days off, but I was ready to get back to it.”

Carlock, the second-youngest of eight children, was still reveling in the glow of the interception that put him on the map. What began as an outlandish fantasy just a few weeks ago suddenly is starting to have a few specks of reality to it.

“Isn’t it crazy?” Don Carlock said. “When the Giants first got in touch with him, that was a dream come true. To have the Giants call was phenomenal. And then he got a shot. We see him progress [in training camp], we were talking, ‘Well, it would be nice, maybe, to be on the practice squad and get a little more time.’ And then we see this weekend and all of a sudden people are talking about a roster spot. This is unbelievable. Truly unbelievable.”

If he ever doubts the veracity of any of it, now he’s got the football in the trophy case to prove it.