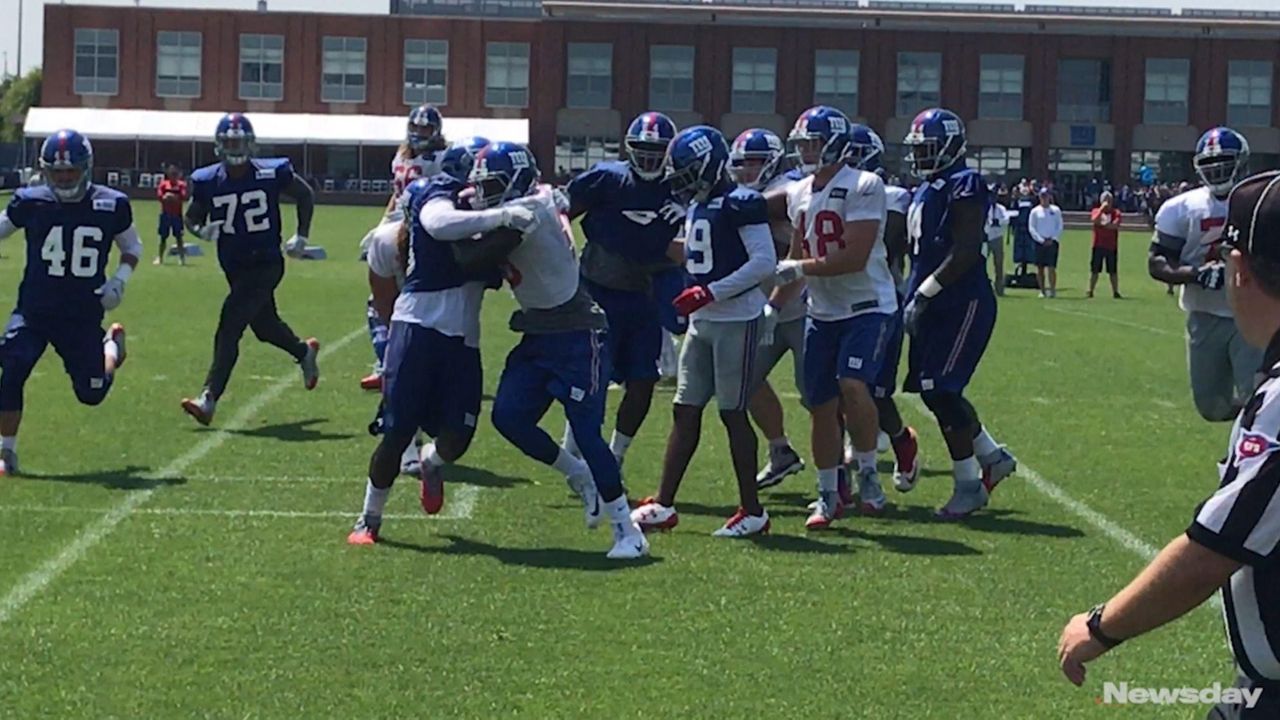 Take a look at some of the sights and sounds from Giants training camp on Wednesday, Aug. 9, 2017 at the Quest Diagnostics Training Center. Credit: Newsday / Tom Rock

Aldrick Rosas has been with the Giants since he signed his contract in January. He was their kicker through the spring workouts, started training camp as their only kicker, and has yet to miss a field goal attempt in practices. The coaches have been watching him every step of the way.

None of that means anything.

Everyone — the Giants, Rosas, everyone — knows that the first real test of the first-year kicker and his ability to make the roster will be on Friday when he has to perform in a game situation at MetLife Stadium against the Steelers.

“That,” Rosas told Newsday on Tuesday, “is when we’ll see if I’ve got it.”

Rosas believes he does have it, and he’s excited to prove it.

“I’m anxious to get out there,” he said. “All the work that I’ve been doing since I got here in the spring, I can get out there and put it on film and do it where it actually counts.”

The decision on who kicks for the Giants is one of the most important if underplayed storylines of the preseason. Rosas is largely unproven, having spent time with the Titans in training camp last year where he kicked one field goal and one extra point in preseason games. That gave Rosas, who played at NAIA Southern Oregon in college, his first taste of performing in front of a crowd.

“I remember how it was in Tennessee with the Titans and the atmosphere and the feeling, the fans, it’s a feeling you can’t describe,” he said. “To get back to that feeling, I’m excited to get there again.”

The Giants are covering their bases, though. Last week they signed veteran kicker Mike Nugent. Rosas seems to have passed whatever psychological test the Giants applied with that signing.

“I see a steady young player who is kicking away and hasn’t flinched,” Ben McAdoo said of Rosas since Nugent’s arrival.

“We’re pushing each other,” Rosas said of working with — and really, against — Nugent. “It’s motivation when you have a guy right there with you, running with you, competing with you, it pushes you. We’re both hitting the ball really well and bouncing back off each other. It’s been fun.”

Rosas said he isn’t sure how the work will be divided on Friday, but he suspects as most do that the Giants will alternate kicking opportunities between him and Nugent.

There is a chance that Rosas can go the entire preseason — games and practices — without missing any of his field goal attempts. That would seem enough to win him the job at the end of camp and make him the opening day kicker in Dallas on Sept. 10.

Lining up a game-winner at AT&T Stadium is a lot different than kicking against the Steelers in a half-empty MetLife in August. But Rosas isn’t thinking about that yet.

“I just try to come out here day by day,” he said. “I don’t look ahead to the end of the preseason. I’m just going to come out and do the best I can tomorrow and I’m looking forward to this Friday. All my attention is focusing on this week.”

That, after all, is what kickers do. The good ones anyway. They block out distractions and do their job.

“It just goes to controlling what I can control,” he said. “I can control my walkoff, my thoughts, my mentality behind the whole process of being about to kick. It’s just get a clean ball strike and everything else will be taken care of.”