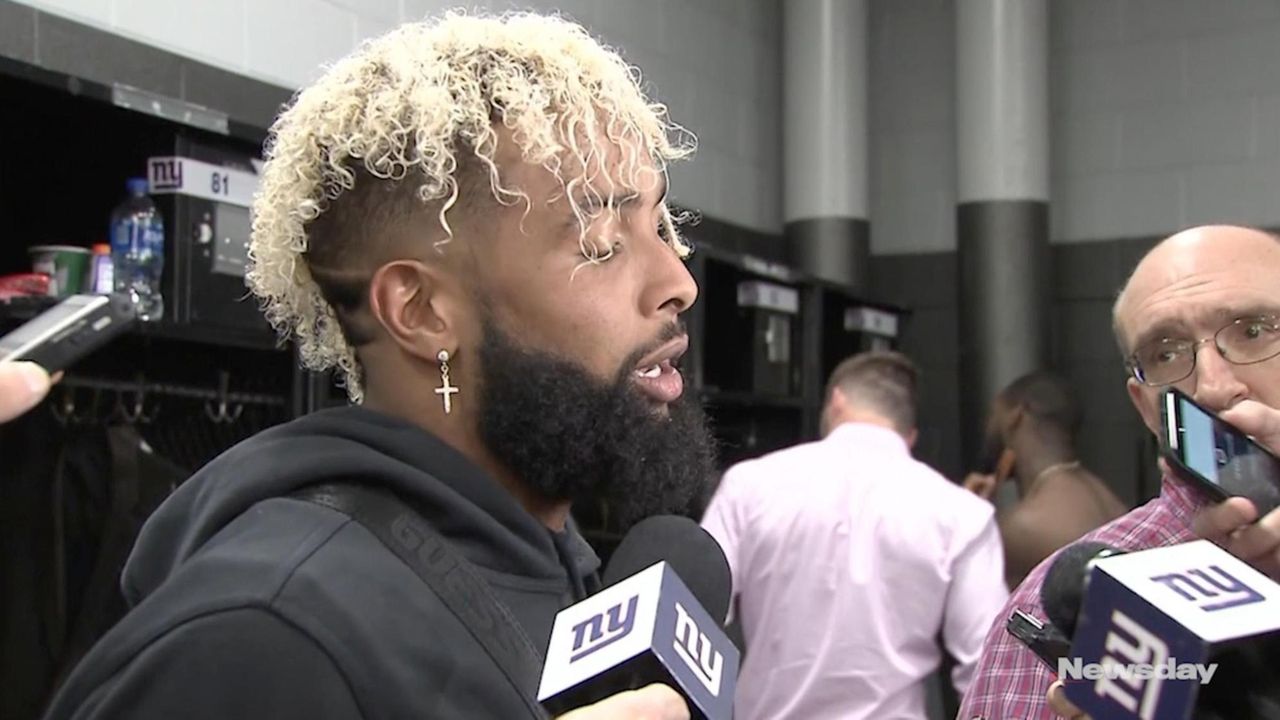 The Giants lost the Carolina Panthers on Sunday, 33-31, on a last-second 63-yard field goal by Graham Gano. After the game, Odell Beckham Jr. and head coach PatShurmur talked about comments made by Beckham earlier in the week about the Giants lacking heart. Credit: Big Blue Entertainment

The Giants returned home on Sunday evening, early enough that if any of them could stomach watching another snap of football they could have seen the Cowboys lose to the Texans in overtime. At just about the time they were taking off from Charlotte a few hours earlier, they probably were aware that the Eagles were losing to the Vikings.

A win may have eluded them against the Panthers, thanks to a 63-yard field goal with one second remaining, but so far the NFC East has yet to.

The Giants surprisingly remain in the thick of things in their division despite a 1-4 record. Both the Eagles and the Cowboys are 2-3, just a game ahead of them, and neither seems to be playing championship-caliber football at the time. The Redskins are 2-1 coming off their bye and face the Saints on Monday night. If they lose, none of the four NFC East teams will have a winning record.

“It’s still wide open,” Eli Manning said on Monday. “A lot of football to be played, a lot of division games to be played, and none bigger than the one we’re facing now against Philadelphia.”

The results undoubtedly bring forth conflicting emotions from the Giants and their fans. First, a sense of salvation that their season can still be saved. But also a missed opportunity to gain ground on division rivals on Sunday. Had they stopped the Panthers and avoided becoming just the second team in NFL history to lose on a 63-yard field goal in the final minute of regulation or in overtime — and the first to do so since Tom Dempsey of the Saints beat the Lions from 63 yards in 1970 — they would have been in a three-way tie for second place.

Even if the Redskins win Monday, Thursday’s Giants game against the Eagles rightly will be framed as the Giants’ last chance to remain relevant. That means having to bury everything the Giants felt on Sunday — and it was one of the biggest roller-coaster days in their recent history given everything that took place on and off their field  and move on at a very swift pace.

“Obviously we have to get some urgency and get going and get hot and get on a streak,” Manning said.

Pat Shurmur agreed with that assessment, and that word in particular.

“The key is to win your division and give yourself a chance to compete [in the playoffs] and go on from there,” Shurmur said Monday. “That’s what we’re battling for… There’s no panic, but there is urgency to win every week. That’s what we’re fighting to do. Every team goes through stuff, and we’re in it. So we just have to go win a game.”

Ionescu sinks long three in last second to win Liberty's opener
Urshela's pinch-hit three-run homer in seventh lifts Yanks over Orioles
Relievers don't do the job as Mets fall to Rays on walk-off single
Knicks hungry to earn fourth seed in playoffs
Cole's strikeout-to-walk numbers are startling
Hicks has tear in tendon sheath in wrist; Stanton out with quad tightness
Didn’t find what you were looking for?