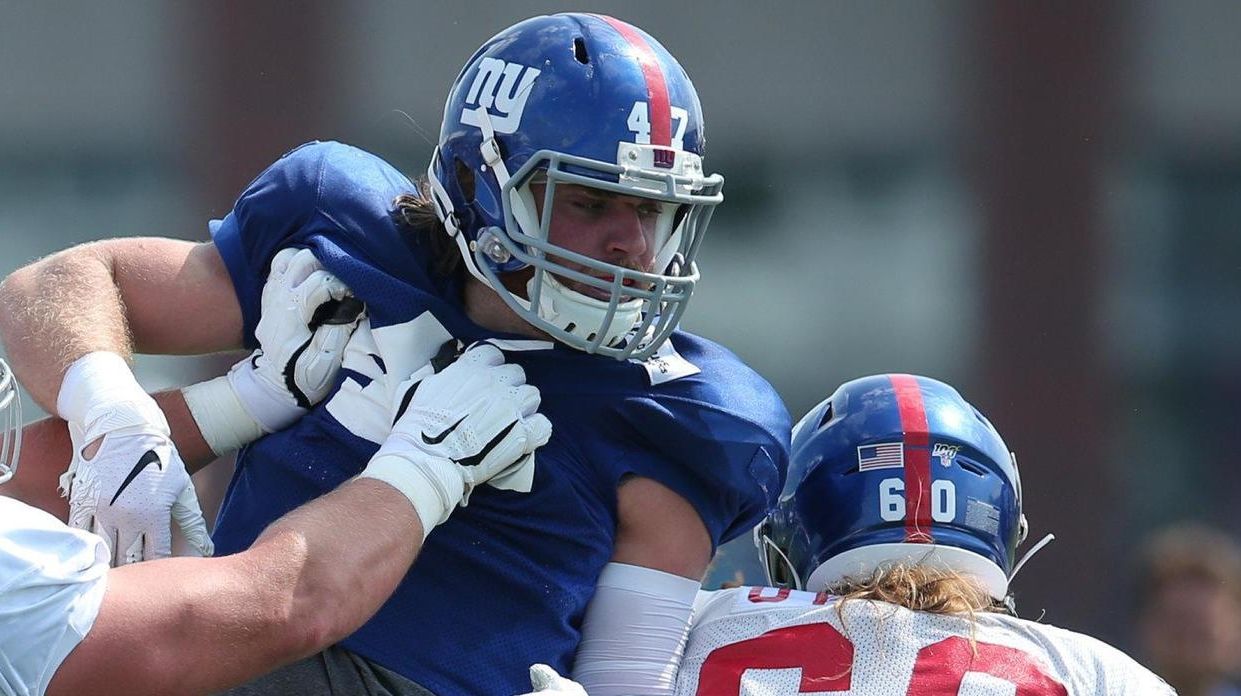 Long Islanders Jake Carlock from LIU Post and James O’Hagan, who played at Buffalo, give insight into what the experience is like competing in an NFL training camp after they signed with the Giants as undrafted free agents in the spring. Credit: Newsday / Casey Musarra, Nick Klopsis

James O’Hagan sees plenty of benefits to being in training camp with the Giants. The rookie center, who reported on Monday with the rest of the first-year players, gets to hone his craft with some of the NFL’s top offensive linemen, on a scale much larger than he ever experienced in high school or college. All this for a chance to suit up on Sundays and play the game he loves.

The commute wasn’t bad, either.

“Drove here in 45 minutes,” the Seaford product said on Friday at the team facility before the second day of full-team practice.

The figurative road to MetLife Stadium from Seaford — or, for fellow Long Island native Jake Carlock, Babylon — likely is much longer than the physical ones the two took to get to camp. They were first-team All-Long Island selections in 2013 and found a good deal of success in college, but here they are just undrafted rookies, each battling with 89 other players for valuable (and sometimes scarce) practice reps. At stake: one of 53 coveted roster spots come the end of August.

“In college, you get a scholarship and they kind of have stuff invested in you,” said O’Hagan, who played collegiately at Buffalo. “But when you come here, you sign an undrafted deal, it’s like, ‘Alright, now you’ve got to prove yourself. We’re not going to be waiting on you to succeed.’”

Added Carlock: “Especially as a rookie, you’ve got to take advantage of every rep you get, because sometimes you may not get many.”

It’s why Carlock and O’Hagan are prepared to soak in as much as they can and do whatever it takes to stand out this summer, whether it’s absorbing the playbook, going all-out in practice, applying the latest tips they’ve picked up from veteran teammates, or in Carlock’s case, learning a new position.

Carlock is switching from the “rover” defensive back/coverage linebacker hybrid that he played at LIU Post to more of an edge-rushing outside linebacker with the Giants. He lined up there with the third team on Friday and drew praise from the coaching staff on the final play of team drills, when he got pressure on quarterback Kyle Lauletta and nearly intercepted the ensuing batted ball.

“Outside linebacker in this defense is almost like a defensive end, putting my hand in the dirt,” Carlock said of his new position. “I’ve never done that before, but these older guys, like Markus Golden and Lorenzo Carter, they’ve been helping me out a lot. I’m getting used to it, I’m getting the hang of it.”

Carlock also knows the value of being versatile, which is why he’s looking to expand his impact to special teams, particularly as a long snapper. Carlock credited Zak DeOssie, who has manned the position for the Giants since 2007, and veteran Taybor Pepper with helping him refine his skills.

“Whatever [the coaches] need me to do, that’s what I’ll do,” Carlock said of playing both defense and special teams.

O’Hagan didn’t get any reps during the team sessions on Friday, but he did participate in offensive line drills with the rest of the unit. He also put in some extra work after practice, snapping with the other centers as most of the team began heading inside.

“Just got to keep grinding,” O’Hagan said. “Just got to keep trying to earn reps and earn playing time and stuff like that. It’s the biggest thing rookies can do, is just go out there and try and prove themselves on a daily basis.”