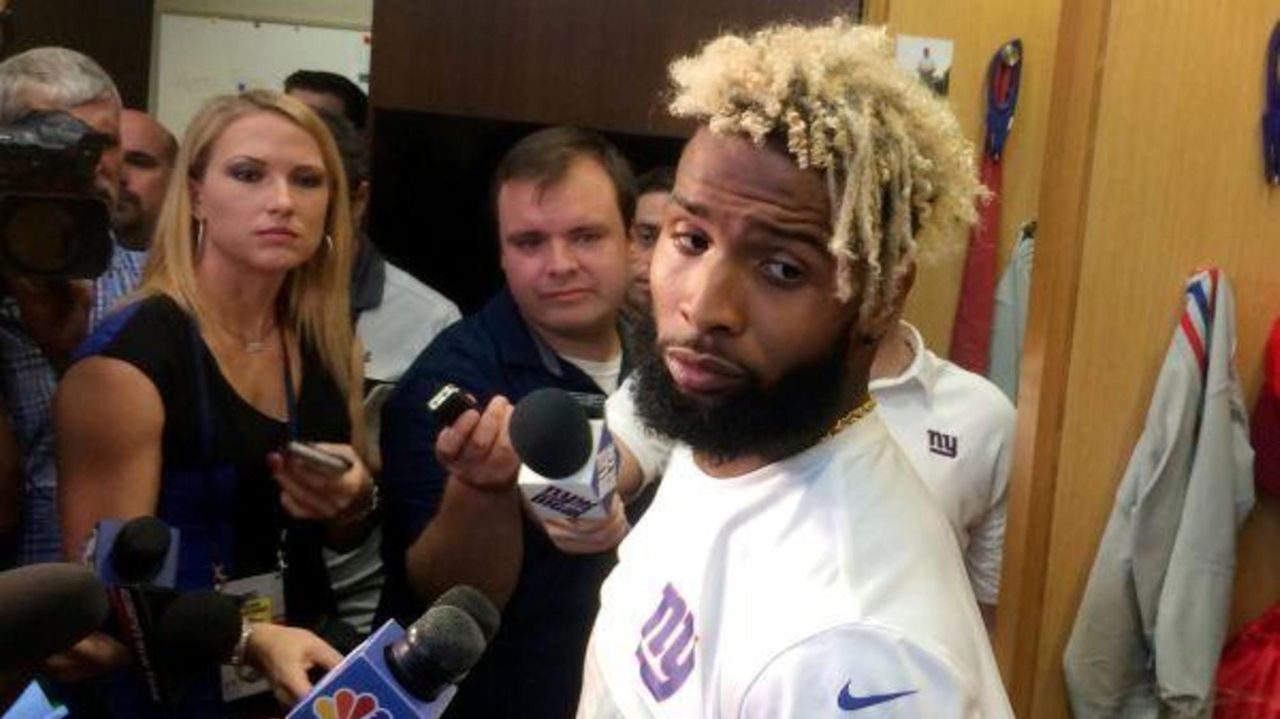 Odell Beckham Jr. met with team co-owner John Mara on Wednesday, Sept. 27, 2017, to discuss his touchdown celebration Sunday that resulted in a 15-yard penalty against the Giants, not to mention several days of public scorn over his vulgar display. "He and I talked," Beckham said, a day after Mara said he was "very unhappy" with Beckham's behavior. "We had a discussion, private discussion in his office." Credit: Big Blue Entertainment

Odell Beckham Jr. met with team co-owner John Mara on Wednesday to discuss his touchdown celebration Sunday that resulted in a 15-yard penalty against the Giants, not to mention several days of public scorn over his vulgar display.

“He and I talked,” Beckham said, a day after Mara said he was “very unhappy” with Beckham’s behavior. “We had a discussion, private discussion in his office. We talked about it, him and I.”

The wide receiver did not give any hints as to how that meeting went. When asked if he apologized, he said only that the two “talked,” but Beckham apparently has started to realize the ramifications of his actions. Asked if he felt he had embarrassed the organization, Beckham said: “Moreso myself, I guess.”

Beckham, though, continues to claim ignorance over the penalty that resulted from his crawling like a dog and then lifting his leg to pretend to urinate in the back of the end zone.

“I don’t think any of us know the rules on what you can do celebrating,” he said. “They put in a new celebration thing to kind of make it seem as if players can celebrate, and then you celebrate and you only have 40 seconds. So, if you celebrate for 20, you have 20 seconds to run on and kick (the extra point), so I don’t really know. I don’t really know how it works, but I do know going forward I have a lot better celebrations.”

He nodded when asked if he would refrain from reprising his dog bit. He also declined to answer a question about whether the act was a response to President Trump’s calling some NFL players a “son of a (expletive)” for not standing for the national anthem.

Beckham wasn’t the only one who seemed to have changed his perspective based on what Mara thinks. After not responding to questions about the touchdown “dance” on Monday and focusing only on the 15-yard penalty, coach Ben McAdoo was forceful in his condemnation Wednesday.

McAdoo lumped the Beckham penalty in with the nine others the Giants committed in their 27-24 loss to the Eagles, and said it is his job to correct them. Especially, he said, the ones that take place before and after plays.

“Celebration penalties are things you can’t have,” McAdoo said. “It’s a poor reflection on me, on the program and on the organization . . . I’m the head coach. It’s my responsibility.”

Mara, who did not comment after his conversation with Beckham, said in his statement Tuesday that the issue would be dealt with internally. There was no indication Wednesday of what that meant, whether Beckham might be benched for a portion of Sunday’s game against the Bucs, possibly fined (which he most certainly will be by the NFL), or if he was simply called on the carpet by Mara.

McAdoo reiterated his position that the conversation should be about Beckham’s two touchdown catches, not his touchdown dances. “He made two of the finest plays you’ll ever see in pro football since I’ve been in the league,” he said. “Those are getting overshadowed. It’s unfortunate.”

McAdoo also insisted it has not been a distraction for the team. “We need to focus on our football,” he said. “We have to get prepared to go win a football game down south in some conditions against a good team.

“I’m not distracted,” McAdoo said. “I think some people in this circle (of reporters) are distracted.”