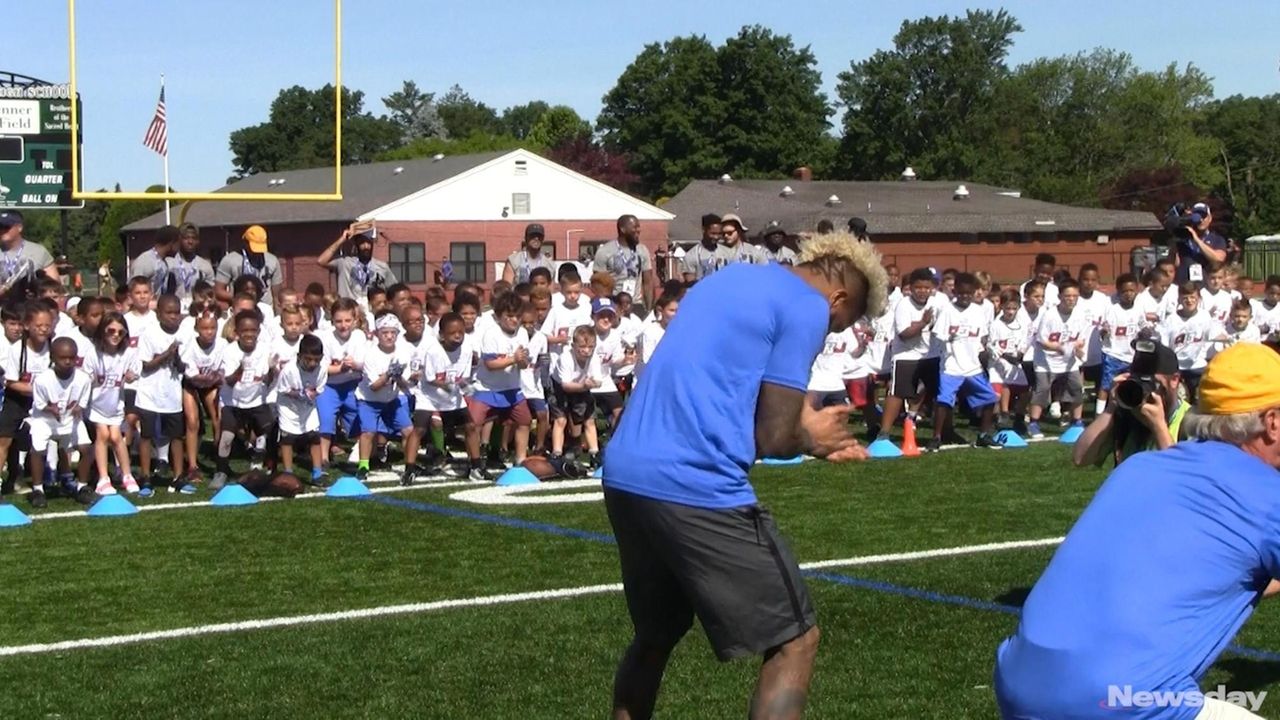 Chasity Jones traveled all the way from Nashville to surprise her son with an experience of a lifetime, training alongside Giants wide receiver Odell Beckham at his youth football camp at St. Joseph High School, in New Jersey on Saturday, June 16, 2018. Credit: Patrick E. McCarthy

METUCHEN, N.J. — There probably were about 50 legitimate questions that could have been asked of Odell Beckham Jr. on Saturday when he hosted his annual youth football camp in New Jersey.

The star receiver has not spoken to assembled media since Oct. 4, 2017, just a few days before a fractured ankle ended his season. Since then, he has not commented publicly on the status of his ankle, on his thoughts about the team’s new head coach and general manager, on the Giants’ decision to stick with Eli Manning as starting quarterback heading into 2018, or anything else related to his personal or professional life.

That’s probably why Beckham declined to formally speak with reporters who were invited to St. Joseph High School in search of those answers.

There was one query that he did take the time to acknowledge, though, as he headed off the field after a morning spent frolicking with grade-schoolers. And it probably was the most important one of all.

Will Beckham report to the start of Giants training camp on July 25?

“No holdout,” he said to the group.

Those two simple words should help Giants fans sustain the optimism and excitement that have been brewing throughout the offseason training program as the team and its players head into what (usually) is a five-week news vacuum.

There was no time for a follow-up, so the lingering detail that won’t be answered until the Giants take the field for their first workout July 26 is just how much Beckham plans to participate in training camp practices.

He was cleared to practice by the Giants this past week after ankle surgery last season, but he took part only in individual drills without defenders. He spent extra time working with Manning on some routes during and after the three minicamp practices but was a spectator whenever the Giants’ offense faced the defense in any capacity.

There was a thought that Beckham might skip camp unless he gets a new contract. He is entering the final season of his rookie deal and is due to earn about $8.5 million for 2018. He potentially could skirt the rules and avoid team fines that come with holdouts by showing up for training camp but maintaining a distance from any activities that could possibly stunt his return.

In three of Beckham’s past four NFL preseasons, he has experienced an issue that has sidelined him for at least a few days — a hamstring injury as a rookie in 2014, a spiked ankle after getting tangled up with a teammate in 2016 and a sprained ankle in a preseason game against the Browns last summer — so until Beckham and the Giants agree on a long-term deal, it would seem unwise for him to risk any setback that might tilt negotiations.

On Thursday, Giants coach Pat Shurmur said he had no reason to think that Beckham will not be a full participant in training camp . . . for reasons medical or otherwise.

While it’s ludicrous to gauge Beckham’s quickness and health off his performance against third- through eighth-graders at a weekend camp, the Giants receiver certainly looked spry and seemed to enjoy himself Saturday. He participated in some drills with the campers and even took on about 10 of them in various one-on-one competitions. At one point, he jumped high in the air over a tiny would-be defender to pull in a one-handed catch and was swarmed by the group.

It’s the kind of play Giants fans have been yearning for since Beckham’s season ended in October. And now, it seems, they might not have to wait much longer.

USA reaches medal round behind KD's 29 points
No second Olympic diving medal for LI's Capobianco
Watch Joey Gallo's fantastic catch in left field
Conforto sits as Rojas believes problem is his mental approach
Kluber takes another big step by throwing from Stadium mound
Nimmo not in starting lineup as hamstring remains an issue
Didn’t find what you were looking for?