Pat Shurmur reacts after the lights in the Giants' auditorium went out and came back on after he was introduced as the team's new head coach during a press conference at Quest Diagnostics Training Center on Friday, Jan. 26, 2018. Credit: Kathleen Malone-Van Dyke

Pat Shurmur’s interview with the Giants’ leadership was an all-timer, co-owner John Mara said. One of the best conversations — if not the best — he’s ever had with a prospective coach. On that, all of the participants in the Jan. 6 meeting agree.

But what really made Mara swoon was when Shurmur talked about offensive linemen and how important they are to the success of a team. He was happier than a hog mollie in mud.

“When he said, ‘You have to be able to block them,’ that is something that hit home with me,” Mara said. “Obviously, we’ve had our issues there.”

They’re trying to fix them. It’s one of the things that new general manager Dave Gettleman listed as a priority for the team when he was introduced in his role just over a month ago, and it’s one of the reasons why Shurmur’s Vikings were able to improve from 8-8 to 13-3 between 2016 and 2017. 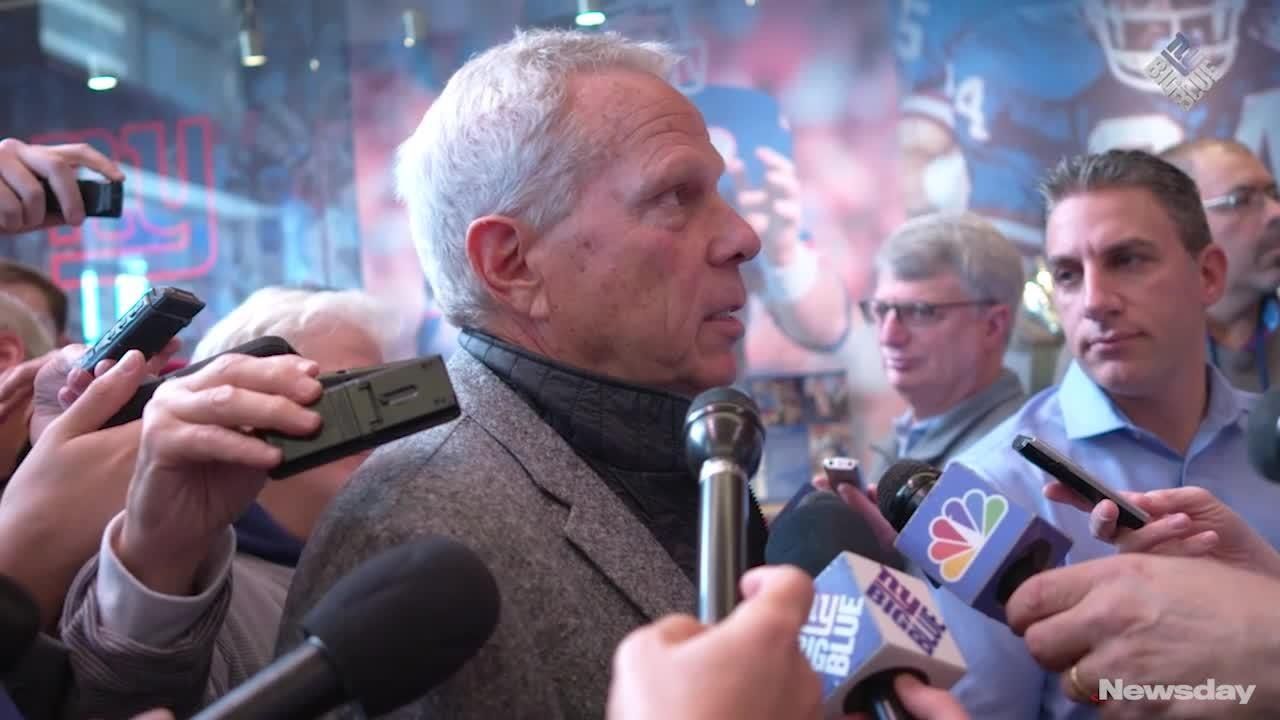 “We didn’t change the oil up there, we changed the transmission,” Shurmur said. “We went and got two free agent offensive linemen, we drafted a center that played like a veteran, and we transformed the offensive line that helped us do the things that helped us win 14 games [including the postseason].”

The Giants, as Mara said, have had some issues on their offensive line. They have used high draft picks on the position for a number of years — Justin Pugh and Ereck Flowers both were first-round picks, and Weston Richburg was a second-rounder — but with little to show for it. The previous regime tried to build an offensive line the way the Cowboys did, through the draft. This crew seems more intent on doing it the way the Vikings, Rams, Panthers, and others did: Through free agency.

Shurmur told Newsday that it can be difficult to find linemen coming out of college.

“You can determine whether they can do it or not by watching the tape,” he said. “I will say this though: There are more and more college linemen playing in a two-point stance in these spread out-type offenses where you don’t get to fully evaluate their skills that are necessary here.”

So what is Shurmur looking for in linemen?

“It’s important that they’re able to move their feet,” he said. “They have to be big enough to anchor down on a defensive lineman who is bull-rushing them, and then they have to be able to have what I call recoverability. At some point a guy is going to get on your edge and you need the athleticism to kind of fight your way back into position. They also have to be able to use their hands.”

So that’s what the Giants will be looking for. Will they find it?

“I know we have a serious mindset when it comes to doing what we can to upgrade in those areas,” Shurmur said. “Some of it may be just inspiring a player on the roster to play better than he’s played, you know, and that comes back to coaching. And then we all know that every once in a while, you need to get some new players.”

Shurmur has ‘zero tolerance’ for lack of effortPat Shurmur walked into the Giants' facility for the first time on Thursday afternoon. The ... Glauber: New Giants coach Shurmur off to a good startBy almost any measure, Pat Shurmur won the day.Introduced to the media Friday as the ... Shurmur on Beckham: ‘I need to get to know him’The Giants appear to be posing a not-so-subtle ultimatum to Odell Beckham Jr.: If you ... What Shurmur learned from his Browns tenureWhen Pat Shurmur took over the Browns in 2011, they were coming off a 5-11 ...