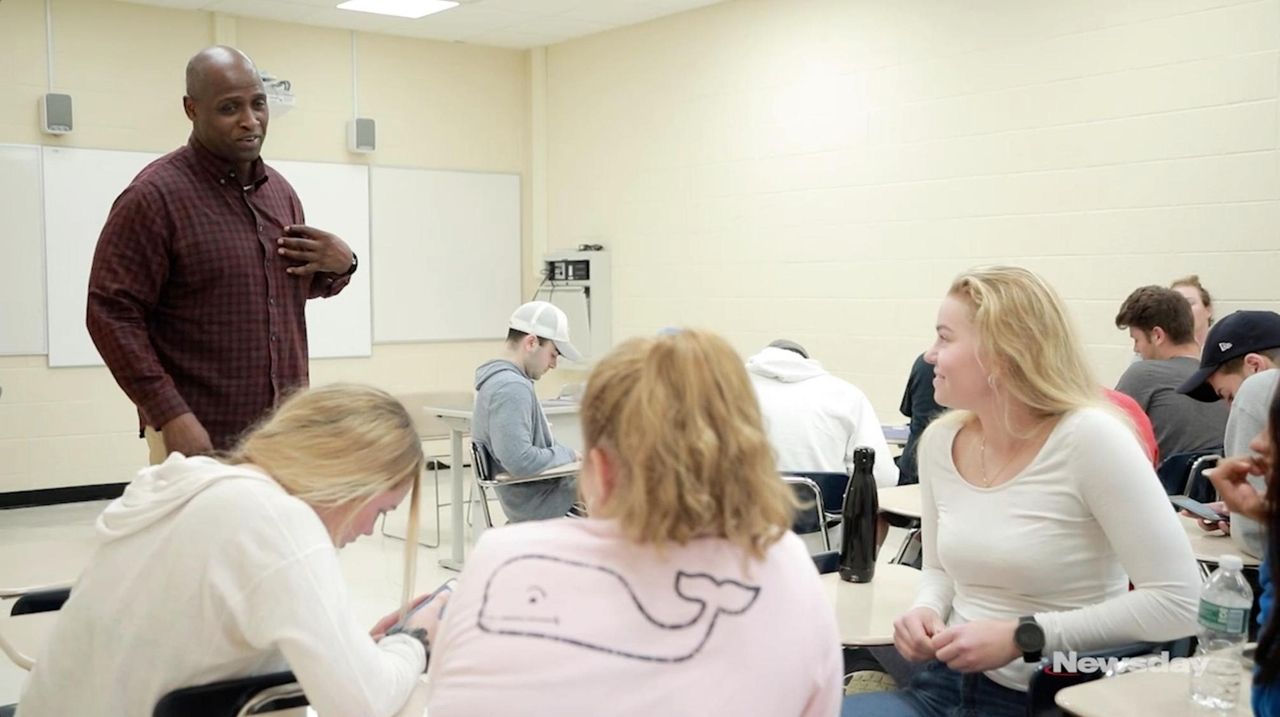 Perry Williams was walking up the hill toward his dorm room at North Carolina State when Jim Valvano whizzed past him. Valvano jammed on the brakes.

“I see it’s this Mustang convertible, I realize it’s Coach V, and he turns around and pulls up,” Williams recalled of that day in the summer of 1982. “He goes, ‘Perry Williams, right?’ I knew Coach V — everybody knew Coach V at N.C. State — but I had no idea he knew me.”

Their brief conversation would help change the direction of Williams’ life, transforming him from an unassuming young athlete to a man who would come to mentor others the way Valvano helped Williams.

“I want you to come to my [basketball] camp tomorrow,” Valvano told Williams.

“But Coach, I don’t play basketball,” Williams said. “Why would you want me to come?”

“I’m going to introduce you to my campers,” Valvano said.

Williams was petrified, thinking he’d have to give a speech, something he’d never done.

“He blows the whistle, a couple hundred kids come over, and Coach V says, ‘I want to introduce you to Perry Williams, all-star in track, great football player, he’s going to be a hell of an NFL player one day.’  ’’

Williams didn’t have to give a speech that day, even though he’d stayed up the night before jotting down notes and thinking of what he’d tell the young players. Valvano did all the talking. But that interaction resonated with the introverted Williams, to the point that a whole new world soon would open up beyond his life as an athlete. It would turn into his life’s mission.

Williams did go on to enjoy an outstanding career as a Giants cornerback, playing 11 seasons and winning two Super Bowl championships. But life after football was as important to him as his journey to the NFL, and he forged a second career in education, carrying out the vision Valvano and a handful of other mentors had seen in him.

Williams spent 22 years as an adjunct professor, administrator, and lecturer at Fairleigh Dickinson University. He is now the director of the newly introduced sports management program at Long Island University.

That young athlete who was mortally afraid of delivering a speech to Valvano’s young basketball players now has spoken to hundreds of thousands of people over the years, mentored incarcerated boys and girls in Bergen County, New Jersey, and even served as the keynote speaker at a Pentagon-sponsored event for more than 300 special intelligence officers.

The topic of the speech: What it takes to be a winner.

Just as Valvano did for him, Williams has tried to impart leadership qualities in his students and now hopes to help a generation of would-be entrepreneurs find their way in the world of sports business.

“Sports is a trillion-dollar industry,” Williams said in his office at the school. “You’ve got the transitional sports of football, baseball, basketball, soccer, hockey, but there are job opportunities in other sports, too. Just look at the world of Esports. The sports industry is like Wall Street. You’ve got a chain of command, and it’s the infrastructure of the management. There are all sorts of job opportunities in sports, and that’s our mission, to prepare students for that world.”

Williams offers unique credentials to steer the fledgling program. Not simply a successful player with two championship runs to his name, he has spent most of his adult life in academia and is a unique conduit to the world of sports management.

“Perry’s an expert in the field,” said Dr. Ed Weis, vice president of academics at LIU. “We’re a start-up program that he’s building from the bootstraps up, and we’re excited about the energy he’s brought to us so far. There’s nothing more inspiring to students who want to be leaders in sports management than somebody who’s been in the arena. Perry not only played in the NFL but won Super Bowls and has been coached by two Hall of Fame coaches in Bill Parcells and Bill Belichick.”

Throw in Pete Carroll, the Super Bowl-winning coach of the Seahawks who was Williams’ defensive coordinator for three seasons at N.C. State, and there’s a formidable list of coaches to learn from, both in football and in life.

“Those coaches taught me a lot over the years,” Williams said. “They taught me what it takes to be a winner. And so many of the teammates I was able to play with, Hall of Famers like Lawrence Taylor and Harry Carson, great guys with integrity, guys of great character. I looked at them as my brothers, like my extended family.”

Right before the 1985 season, Williams’ intellectual curiosity was piqued when former FDU dean Ken Vehrkens created a continuing education program for Giants players after conferring with former general manager George Young. Williams completed his undergraduate degree in criminal justice and later was convinced by Vehrkens to pursue a master’s degree in public administration.

“[Vehrkens] said, ‘Listen, this isn’t a short-term investment. It’s a long-term investment,’  ” Williams said. “  ‘We’ll work with you.’ That’s when the green light came on.”

Just a few months after the Giants beat the Bills, 20-19, in Super Bowl XXV, Williams received his master’s degree.

“When we wanted to bring somebody into the sports management department, it wasn’t a priority to have an athlete,” said Dr. Rob Valli, dean of LIU’s School of Business. “The priority was to have someone with character that was the real deal, whether they come from the back office, the front office or the playing field.

“With Perry, we have the best of both worlds,” Valli said. “We brought a person in from the NFL, which is the biggest emblem you can have in sports, who is well liked and has a character and the mindset of an athlete and also the mindset of an entrepreneur who recognizes where the opportunities are.”

In addition to his responsibilities in running the sports management program, Williams also is a faculty athletics representative for LIU’s Brookville and Brooklyn campuses. If there are off-field issues involving student-athletes, Williams works with them to help resolve problems. It’s a particularly impactful role in light of LIU’s newly recognized status as an NCAA Division I program.

Williams’ passion to help young people, first stoked when Valvano saw something in him that Williams didn’t even realize existed, has blossomed into his life’s work. Valvano was delighted to help Williams come out of his shell, and the two shared the dais at the Downtown Athletic Club in New York a few months after Williams won his first Super Bowl championship with the Giants. Williams smiled as he recalled the event.

“Coach V says he wants me to do a speaking engagement with him, and I get up in front of about 300 people and do my spiel first,” Williams said. “Then Coach V comes up and says, ‘That’s my man. Look at him. When I met him at N.C. State, he was walking around in sneakers, shorts and a T-shirt. Look at him now, wearing Italian-made suits and shoes. Oh, madone!’  ”

Not long after the event, Williams asked Valvano why he was drawn to him.

It’s something he has never forgotten.

Prof. Williams hopes he has made his late mentor proud.