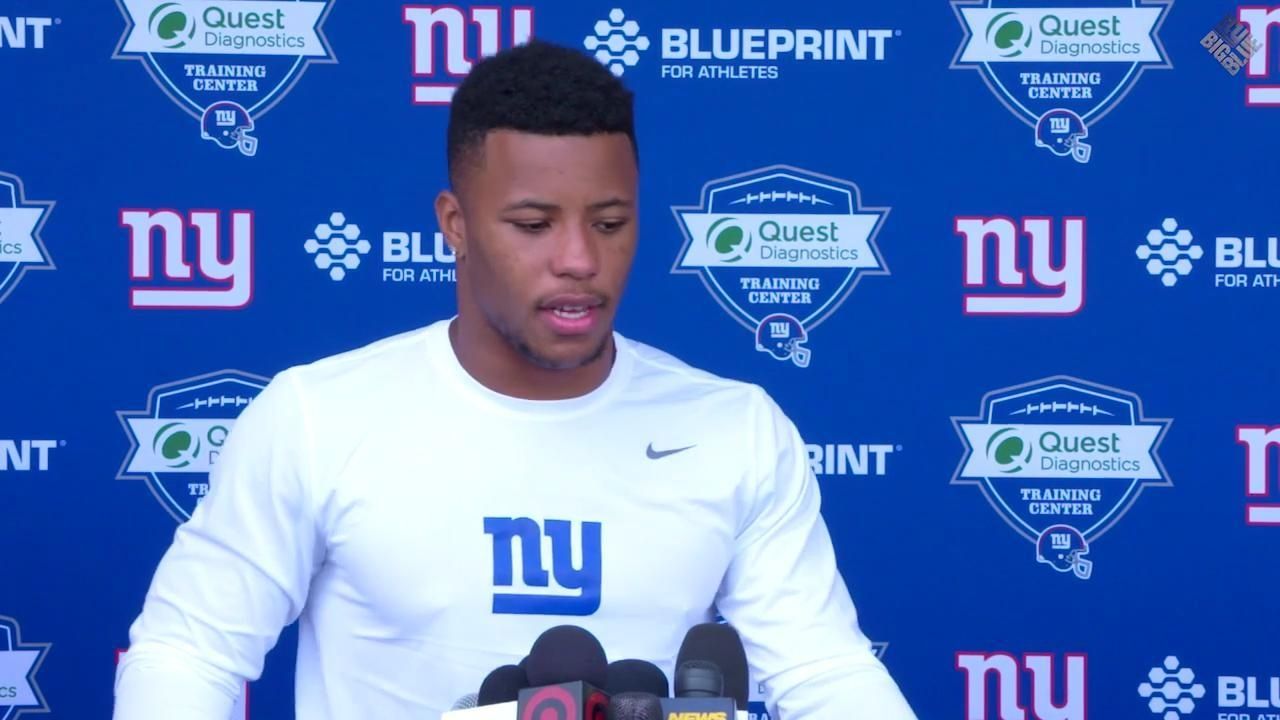 Saquon Barkley, the Giants' No. 2 overall pick, spoke to the media on the first day of rookie minicamp on Friday, May 11, 2018. Credit: Big Blue Entertainment

Pat Shurmur said he wants to treat Saquon Barkley like any other member of the team.

That might be an impossible task, not only because of the hype that accompanies the running back to this weekend’s rookie minicamp and his first on-field moments as a Giant, but because of who Barkley is.

So while Shurmur and the coaching staff technically are running things for the 61 players with various levels of roster certainty and expectations, it was clear on Friday that this is Barkley’s camp and — with the temporary absence of veteran players — Barkley’s team.

It was Barkley who broke down the players after their first walk-through on Friday morning, Barkley who already has established himself as the go-to guy if someone has a problem, and Barkley who decided when Friday afternoon’s first full practice officially ended.

He and quarterback John O’Korn spent about 10 minutes after the workout throwing and catching passes. Wide receiver James Clark was working on catching off a machine to the side, but Barkley refused to break up the toss session until after Clark was finished. Finally, with Clark on his way to the locker room, Barkley and O’Korn jogged toward the building shoulder-to-shoulder until they were a few paces away from the stairs. That’s when Barkley slowed down and allowed O’Korn to get a few paces ahead so the running back could honestly say he was the last to leave the practice field.

It’s as if he can’t help himself.

“You have to start out by leading by example, try to be one of the first ones in and one of the last ones out,” Barkley said. “Try to take care of my body. Try to do the right things on the football field. Run to every spot. And when you have to be vocal . . . those are the ways I’m trying to grow into a leader and develop that quality I have.”

Doing that without standing out — particularly for the wrong reasons — is the challenge.

“I don’t want to be that guy who thinks he’s a high draft pick and he’s got it all given to him,” Barkley said. “I have the mindset that you have to work every single day, learn every single day. Be a student of the game, learn from the guys and the coaches.”

Said Shurmur: “That’s what’s really cool about him is he has that mindset.”

The expectations for the No. 2 overall pick are quite lofty. Even before making the selection, general manager Dave Gettleman said the player needed to be able to be visualized in a gold jacket. Barkley simply nods in agreement with such talk.

“The No. 2 guy should be a Hall of Famer, when you think about it,” Barkley said. “That’s the goal.”

Including these three days of rookie minicamp. So while most of the players are focusing on their playbook and trying to figure out where to go, Barkley has bigger aspirations for these few days. He, too, has to adjust to the offensive scheme, but the Giants aren’t worried about that.

“We’re very confident he’ll be able to do everything well,” Shurmur said of the on-field stuff. “Our sense is that he is [a quick study]. There’s nothing that tells us he’s not.”

Instead, this weekend is more about Barkley flexing that indescribable essence he brings with him — a je ne Saquon, if you will — into the building for the first time. It’s that element of him that doesn’t show up on film or in highlights. It’s the part that comes only from meeting him, being around him, and seeing him step into a large role on the team, not just in the offense.

He’s trying to be what he called “a veteran pro at a young age.”

Hernandez wants Barkley to follow his footstepsWhen it comes to clearing a path for Saquon Barkley, guard Will Hernandez takes his ... Rookie minicamp resembles freshman orientationGiants rookie minicamp is more like a college orientation than a cannonball submersion in the ...