NORTH CALDWELL, N.J. — Saquon Barkley smiled coyly when he finally was asked the question that’s been circling him for months. Will Week 1 include the Giants’ star running back and his surgically repaired right knee?

"I don’t know," he said, reiterating what he’s said in one way or another whenever he’s been questioned about his physical situation. "I guess we’ll see."

Barkley, who suffered an ACL tear in Week 2 last year, has been somewhat evasive about his timetable, though general recovery times for the injury place his return within this time frame. He’s not sure if he’ll be able to participate in training camp in earnest and hasn’t even had a conversation with coach Joe Judge about how much he’ll be allowed to do.

One thing was clear as he ran around with kids at a youth football camp at West Essex High School on Monday morning: He’s certainly made significant strides in the last few months. 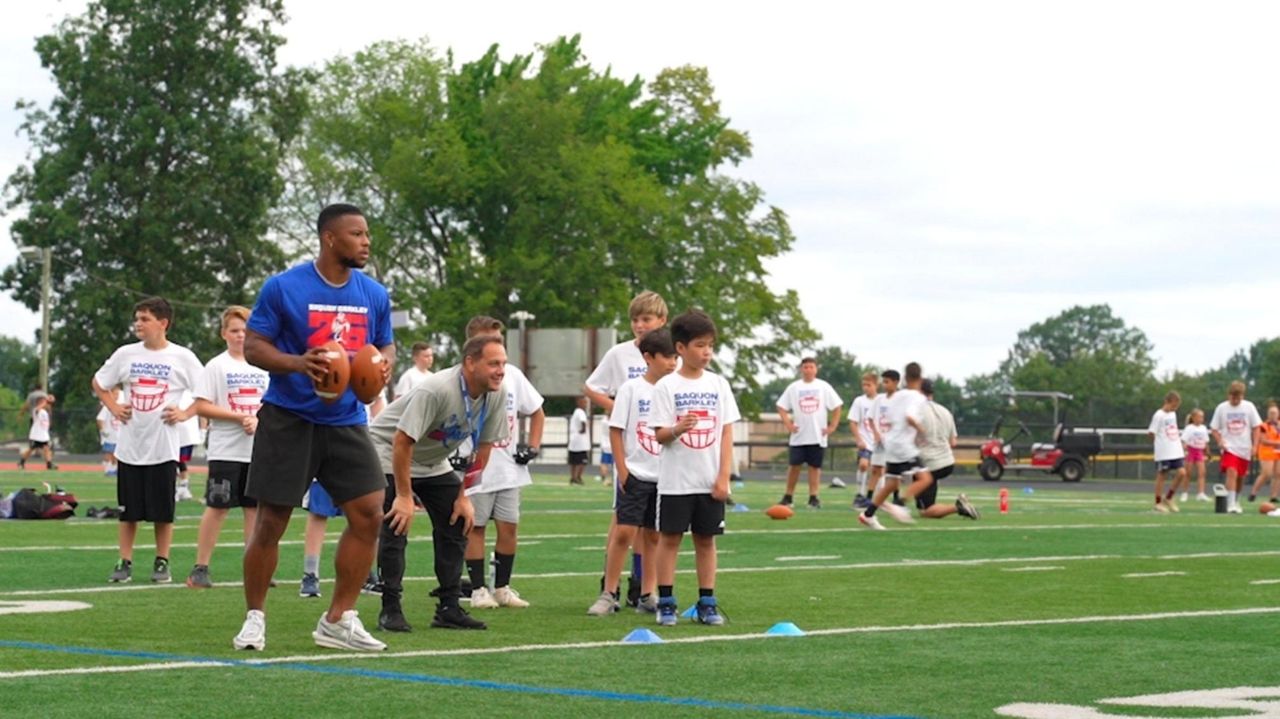 Saquon Barkley leads football camp of over 200 kids Giants running back Saquon Barkley, while appearing at a football camp for kids in New Jersey on Monday, July 19, 2021, said it's unclear when he might return to action as he continues to rehab from his injury last season.

"It’s a fun process but it’s a tough process at the same time, so I have to continue to listen to my body, listen to my trainers and coaches and just take it day by day."

Barkley has said rehab is an isolating process, but it’s gotten less so since the season ended, and he’s been able to work out with Daniel Jones, David Sills and Sterling Shepard.

"I have some great teammates — teammates that have made sacrifices just to be with me," Barkley said. "They’re coming in with me and getting the work in and working [with] me and sacrificing their workout just working with me and pushing me, so I’m really thankful for that."

Barkley said his knee feels "pretty good" but stressed that the rehab process is too complicated for flat declarations of a return.

"I’ve kind of got to play it by ear," he said. "When it comes to rehab, rehab is never a straight line, so just . . . listen to your body, listen to your knee, and whatever your body is telling you, go with that."

He added that he is eager to participate in training camp, which starts next week, though perhaps not physically.

"My expectations for myself this summer is come out, continue to be a leader, continue to be supportive, whatever I’m able to do, whatever I’m told to do, go at it 110% and eventually get back to playing the sport I love," he said. "Like I’ve said before, I’m very blessed and fortunate to have a great team and great staff who’s going to listen to me and we’re going to take it day by day."

He added that he had no intention of rushing his return to a team that potentially could be explosive with his contributions.

"I’m just taking it day by day and listening to my body, and whenever I’m able to get out there, make sure I’m 110%," Barkley said, "not just for the safety and health of myself, my well-being, but also so I can go out and compete at a high level and show the world who Saquon is."