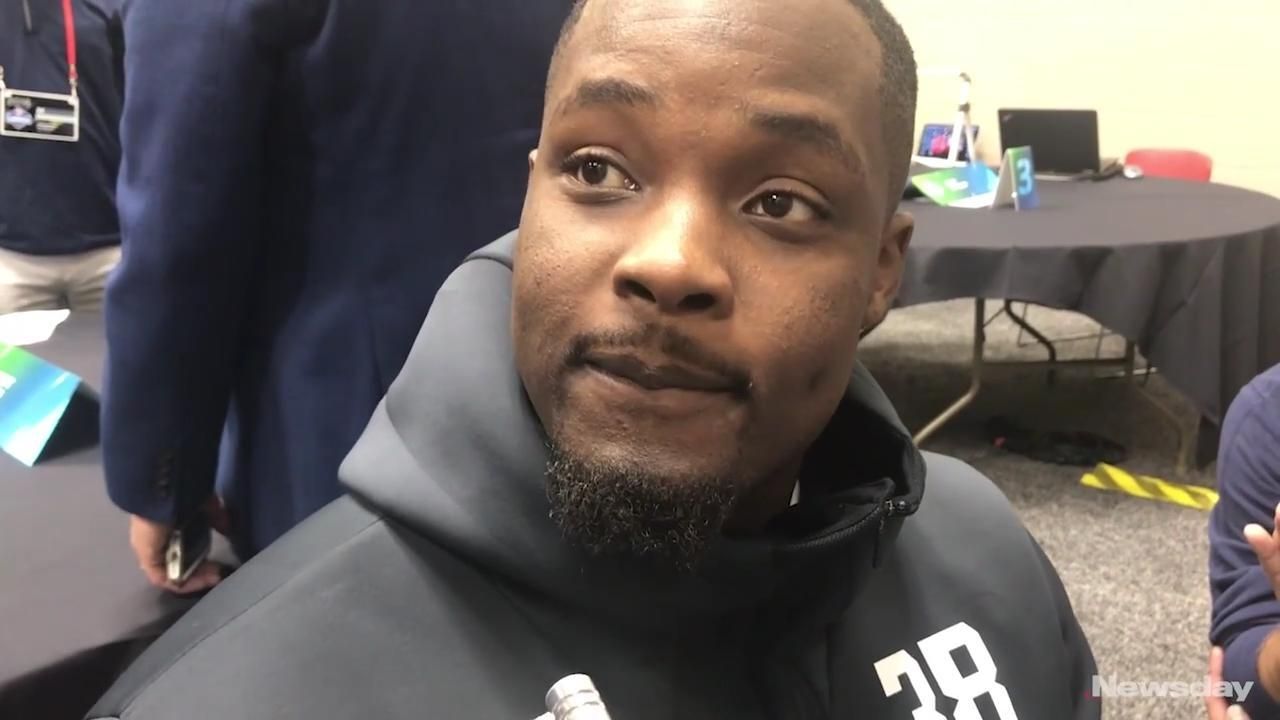 Greg Senat, an offensive lineman from Wagner who grew up in Elmont, talks about proving himself at the NFL Scouting Combine on March 1, 2018. (Newsday/Tom Rock)

INDIANAPOLIS — The players here at the NFL Combine are, by nature, very competitive. They will try to outdo each other in everything, whether it’s the drills on the field, the reps at the bench press, or the games they play with each other during the very limited down time they share together.

No one, though, has been bold enough to challenge Greg Senat in a game of one-on-one.

“I think everyone here knows I would probably beat them,” Senat said with a chuckle.

That’s because while he is now an offensive line prospect for the NFL, he was first a Division I college basketball player at Wagner out of Elmont. A forward, in fact. He actually first attended Wagner on Staten Island to play hoops, was a two-sport athlete for one year, and just finished his second year of football this past fall with a trip to the East-West Shrine game.

His basketball background is both a blessing and an obstacle for him. It helps him on the field, he said.

“When you are blocking on the field you’re basically just defensive sliding on people, staying in front of a defender,” he said of the comparison between the two sports on Thursday. “I think playing basketball has helped me develop quick feet and that kind of conditioning and quick twitch that you need to play offensive line.”

The flip side is that he is very green. While he impressed at the Shrine Game, he still has a lot to learn about high-level football.

“I think [teams] just see me as a tackle, someone who they have to put a little time into to teach me the game but who can play anywhere,” he said when asked about what position he can play in the NFL. “I would love to be a left tackle in the NFL. That’s the pinnacle there and I think I can definitely do that.”

The basketball background is also a concern for teams who have spoken with him here. The biggest question he gets, he said, is whether he is “fully committed to being a football player.”

“Some of them may have questions about why I started so late or if I still have any basketball player left in me,” he said. “But I’m fully committed to this. I love the sport. I’m happy to be here and I think I’m doing what I’m supposed to be doing.”

That said, he’s still keeping his eye on the Wagner basketball team this winter. They are 22-8 and just won their quarterfinal game in the NEC Tournament. They’ll play in the semifinal on Friday.

“Shout out to those guys,” Senat said. “Keep working and make it to the NCAA Tournament!”

LI's Parris looks to impress at CombineINDIANAPOLIS — Timon Parris grew up on Long Island and attended Floral Park High School, ... Elmont natives give NFL Combine a local flavorGreg Senat and Timon Parris, on the verge of reaching the pinnacle of football, took ... Pro sports draftees from Long IslandA look at every Long Island high school player that has been drafted by an MLB, NFL, AFL, NHL, NBA or WNBA team. NFL mock draft 5.0Who goes where and when? See Klopsis' latest mock.