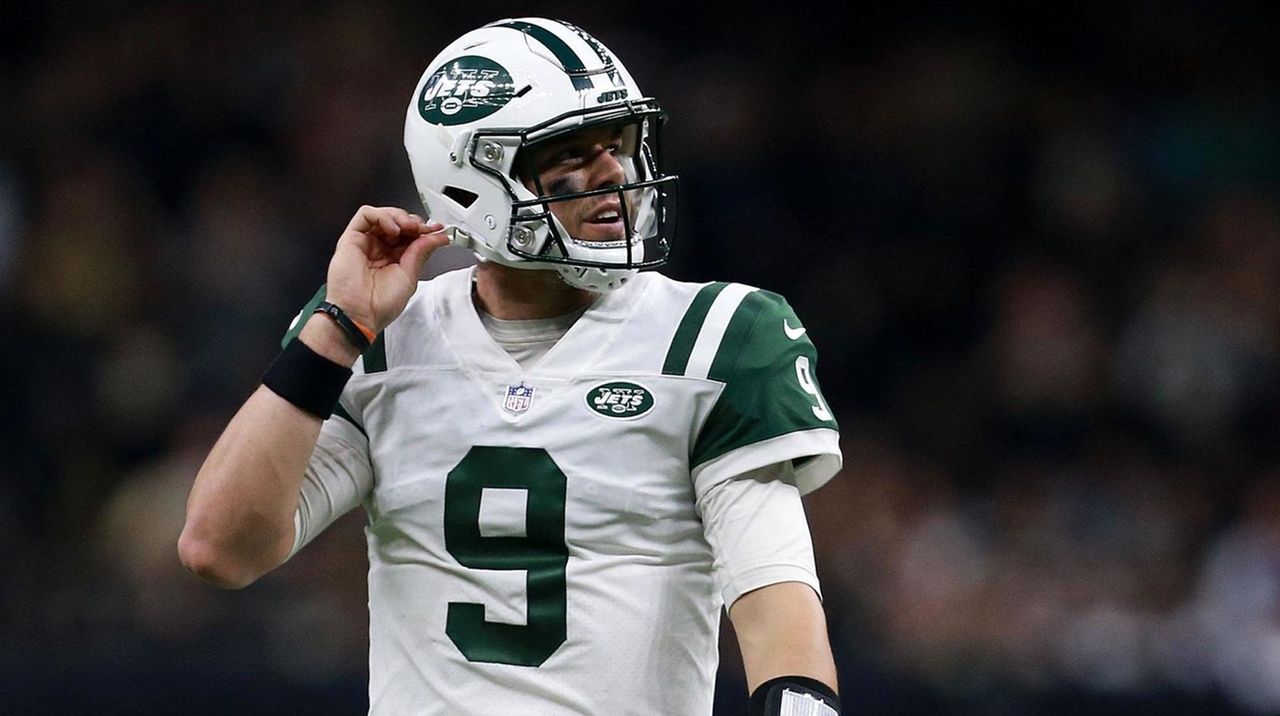 Jets tackle Kelvin Beachum spoke about how the team will bounce back following a 31-19 loss to Saints on Sunday, Dec. 17, 2017. Credit: Newsday / Calvin Watkins

NEW ORLEANS — The Jets officially were eliminated from playoff contention Sunday by a 31-19 loss to the Saints at the Superdome. But Todd Bowles said his team is starting to turn.

Turn into what is uncertain, considering the Jets (5-9) have lost seven of their last nine games.

“We’re going to keep fighting. Obviously, this is going to turn,” Bowles said. “I believe we have a good core group. We just got to eliminate some of the mistakes and some situational football things and we’re going to be OK.”

The Jets gave Bryce Petty his fifth career start, and he didn’t perform like a future starting quarterback. He completed only 19 of 39 passes for 179 yards for one touchdown and two interceptions and had a rating of 49.0. Petty threw several low passes and didn’t have touch on a few others.

The defense kept taking the ball away and keeping the Jets in the game, but the offense didn’t make the most of the opportunities.

After allowing scores on the Saints’ first three drives, the Jets held down the NFL’s No. 1 offense for six consecutive possessions, but during that time, the Jets’ offense was going through the motions. Petty wasn’t challenging the Saints with deep throws, and a conservative game plan meant running the ball with two tight-end sets.

“When you get three turnovers, you normally win the ballgame,” Bowles said. “The offense fought and the defense fought. We did not make enough plays. We did not capitalize on the turnovers.”

When Bowles talks about turning the corner, it’s easy to understand when you see how well rookie safeties Jamal Adams and Marcus Maye played Sunday.

However, when Bowles mentions the core, you also see leading receiver Robby Anderson with two drops. You see a pass rush that had only one quarterback hit (it was missing end Leonard Williams for most of the second half after he suffered a concussion). And you see an offensive line that struggles.

Saints lineman Cameron Jordan knocked down four passes, something you can blame on the line or even Petty for his failure to get rid of the ball quicker against zone coverage.

“The defenses they were playing, they were playing off Robby a lot,” Petty said. “Really off everybody. They were willing to let us run the ball, so that is what we did and had success with it.”

The Jets stayed close, trailing 17-13 in the fourth quarter until the defense fell apart. It was too much to ask to keep Drew Brees in check indefinitely.

Faced with a third-and-7 from the Saints’ 39, Brees connected on a 17-yard pass to Michael Thomas. That moved the Saints to the Jets’ 44, and after another pass to Thomas for 20 yards, it was clear the defense was about to sink. Brees eventually found Thomas for a 4-yard touchdown on a crossing route, giving the Saints a 24-13 lead with 7:42 left.

It gave Petty one more opportunity to prove Bowles is right about his team turning the corner.

JoJo Natson returned the kickoff to the 21, but an illegal block above the waist by Rontez Miles pushed the Jets back to the 8. Backed up in a noisy dome, Petty showed some poise, but the Jets could get no further than their 30.

On third down, Petty tried to throw a sideline pass, and it was deflected by Jordan. Petty caught the ball and threw it again, drawing a penalty with 6:09 left.

Said Adams, “We were in the game. Just didn’t make the plays we needed to. Whether that’s communication or doing the little things, staying in your gap or staying in coverage or having eyes on your man. This team is going to be OK.”