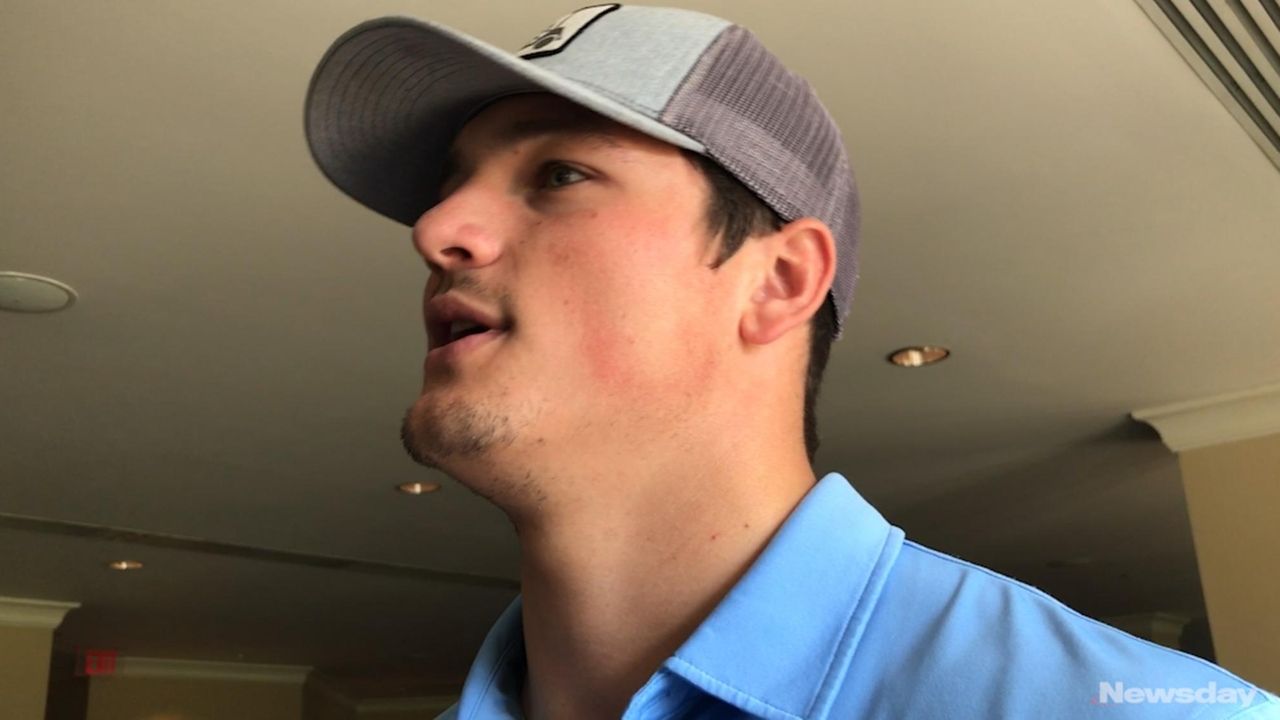 New York Jets quarterbacks Christian Hackenberg and Bryce Petty were battling it out on the golf course on Monday May 15, 2017 at David Harris' annual charity event in North Caldwell, New Jersey. The two will continue that battle on the football field come training camp as both are looking to be the starting quarterback. Credit: Newsday / Kimberley A. Martin

NORTH CALDWELL, N.J. — Christian Hackenberg heard it all this offseason — the criticisms about his game and the pre-draft speculation that linked the Jets to quarterback prospects Mitchell Trubisky and Deshaun Watson.

But, as always, Hackenberg did his best to block out the noise. And now, the second-year quarterback is preparing to achieve the goal he set the day he was drafted last spring: become the face of the Jets franchise.

“Without a doubt, I think there’s a different level of confidence. But I think that also goes back to [being in] Year 2,” Hackenberg said Monday of his transition from a redshirt rookie season to an open competition with new veteran Josh McCown and the returning Bryce Petty. “You’re more comfortable in the situation, more comfortable with the guys in the locker room, in the huddle. Having the ability to throw with some guys and have a feel for them. I think just that natural growth from a — I wouldn’t even say confidence — but comfortability standpoint walking in there and doing things.”

After a season in which he played only in a few preseason games, the former Penn State quarterback is eager to take the next step.

Eventually, though, coach Todd Bowles will be the one to decide if Hackenberg is ready to be his Week 1 starter.

“At the end of the day, it’s not my call, I don’t have any control over that,” Hackenberg said before a round of golf at teammate David Harris’ annual charity event.

“Something that’s always been stuck in my head, all the way going back to high school, is control the controllables. So whatever I have control over, that’s what I’m going to try to do to the best of my ability, whether that’s learning something or throwing — whatever it is . . . And at the end of the day, where the cards fall, they fall.

“I have a ton of goals and being able to play, obviously, and help this team is one of them. I think the bigger picture is just being able to control what I have control over. And that’s ultimately the focus for me.”

Hackenberg tried to do that during the lead-up to the NFL Draft, too. The Jets, who had the No. 6 overall pick, were rumored to be heavily interested in Trubisky, the former North Carolina quarterback, and Watson of Clemson.

How was he able to do that?

“Just put it down,” he said, smiling. “You don’t read the article. You scroll through it. All those things. I think that’s something that you have to mature in as you go through and I feel like I’ve been fortunate enough where I’ve been in a lot of situations where, even going back to college, where you have to take that with a grain of salt and be able to focus on what you need to do and what ultimately matters — and that’s your coaches, your teammates, and you, yourself understanding what you need to do.”

The Jets drafted safety Jamal Adams out of LSU with their No. 6 pick. None of their nine picks overall were quarterbacks.

Asked if he saw that as a vote of confidence from the front office, Hackenberg said: “I think they have a plan and the people upstairs, they have a game plan going into the draft and things they want to get done. Whether that’s a sign of confidence or not, I’ve got to hold up my end and I’ve got to continue to get better . . . and take advantage of this spring going into summer. I wouldn’t say I necessarily took it as one, but I just continue to stay on my path, stay [focused] on my goals and continue to grow in those areas.”

For the second straight offseason, Hackenberg worked with his personal quarterback coach Jordan Palmer in California. He also said he did “some work” throwing in his home state of Virginia.

“I feel like I got better in a lot of ways,” Hackenberg said, though he didn’t give specifics. He did, however, reiterate his heightened level of comfort heading into his second NFL season.

“Ultimately, every day you’ve got to come in and try and get better and put everything you have into the weight room, into film room, into extra meetings; so from that mindset I really tried not to change,” Hackenberg said. “But I think it’s going to be really exciting. There’s a lot of open spots, not just quarterback.”

After spending a full season joined at the hip in the quarterbacks room, Hackenberg and Petty were side by side again on Monday — this time in a golf cart, as they were paired up during Harris’ golf outing. Petty said his surgically repaired left (non-throwing) shoulder is 100 percent and he expects to be full-go during OTAs this month.

Asked if he believes he has a legitimate chance to win the job, he said: “Yeah, why not? It’s an open competition. So for me, it’s open.”

And, like his competition, Petty is confident he’s talented enough to be the face of the franchise.