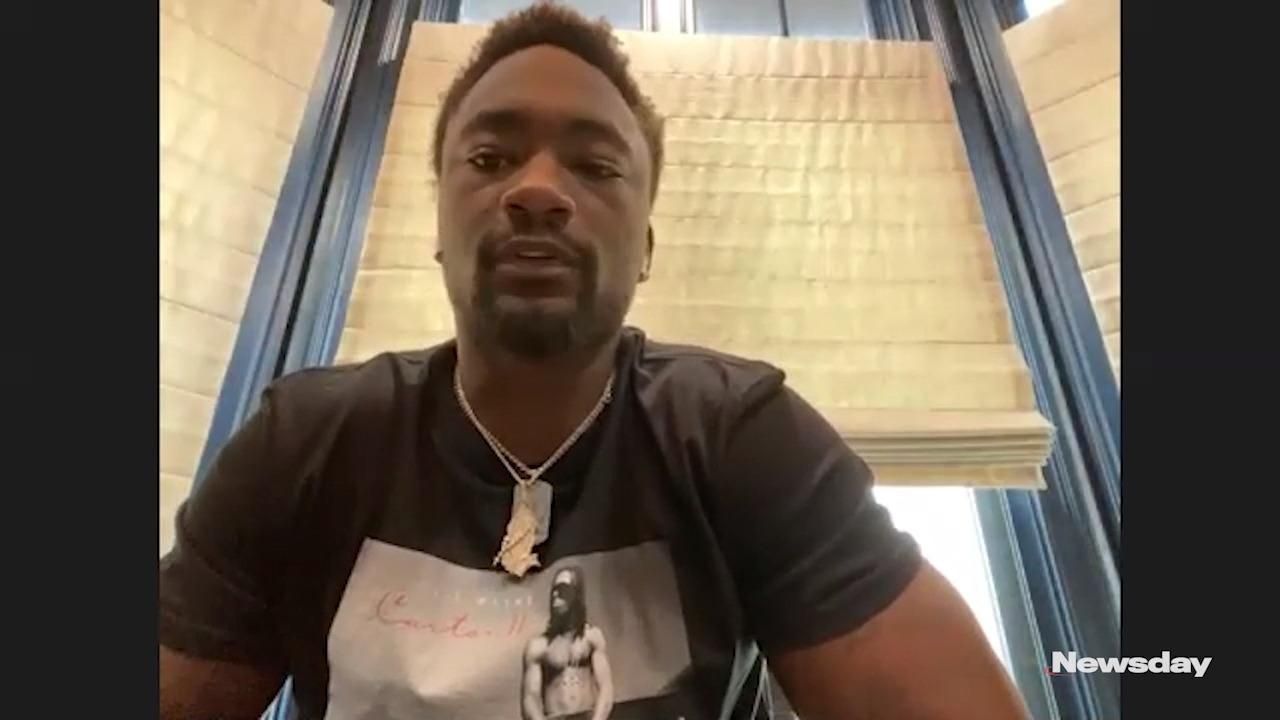 Wide receiver Corey Davis said the culture being estabilshed by new coach Robert Saleh is one of the main reasons he chose to sign with the Jets. He also said he's looking forward to working with QB Sam Darnold. Credit: New York Jets

The Jets’ new No. 1 receiver is expecting to catch passes from Sam Darnold this season.

Corey Davis said he signed with the Jets with the belief that Darnold would be the starting quarterback.

"I’m coming in with my understanding that Sam is the guy," Davis said during a Tuesday morning Zoom call. "That doesn’t scare me at all. I’ve seen Sam do great things. I have all the belief in him."

When Davis was asked a follow-up question, he reiterated that he came to the Jets believing Darnold would be back.

Darnold’s future with the Jets has been the biggest question this offseason. At this point nothing is assured. There is still plenty of time between now and training camp.

The Jets have the No. 2 pick in next month's draft and could use that on a quarterback. They will attend BYU quarterback Zach Wilson’s pro day on Friday. If they’re sold on Wilson being the future, they could trade Darnold for more draft capital.

If the Jets think they’re better off with Darnold, they could use the No. 2 pick on Oregon offensive lineman Penei Sewell or try to trade it for multiple first-round picks and fill more needs.

"Whatever direction they decide to go it’s on me to make sure I’m ready and control what I can control," Davis said. "Come in and be ready to catch from whomever."

But Davis said he is "looking forward to playing with" Darnold.

"He can make some great throws," Davis said. "He’s a competitor. We can both learn from each other. He’s young and we’re both growing, and we can grow together. So I’m looking forward to it."

The Jets gave Davis a three-year, $37.5 million deal to be their new go-to receiver. The former Titan left a playoff team to join one that went 2-14 last year and has missed the postseason 10 consecutive years. Davis said playing for coach Robert Saleh and in offensive coordinator Mike LaFleur’s system were major selling points.

Davis loved Saleh’s energy, called him "a culture guy" and said, "He’s the right guy to come in here and turn things around." Davis also is familiar with LaFleur’s offense.

LaFleur’s brother Matt, who is now the Packers' head coach, was the Titans' offensive coordinator in Davis’ second season in the league. Davis was targeted 112 times and caught 65 passes for 891 yards that season. Davis said the offense has evolved a little but that familiarity was important.

"That was a big piece of it," Davis said. "Just being familiar with that system so I could come in and hit the ground running."

The 26-year-old Davis has caught 207 passes for 2,851 yards and 11 touchdowns in four NFL seasons. A.J. Brown was the Titans' top target the past two years, but Davis is coming off his best season. He had 65 catches for 984 yards and five touchdowns.

Davis, who missed two games after contracting COVID-19, believes he should have been a 1,000-yard receiver and can be for the Jets. They haven’t had one since Brandon Marshall and Eric Decker both surpassed that number in 2015.

"I do consider myself a 'Wide Receiver One,' " Davis said. "My ability to get open, my speed, separation, releases, I feel like I can do it all. Last year showed. I feel like I’m a 1,000-yard receiver. It’s up to me to put in the work and make sure I’m healthy and can play a full season."

Davis’ older brother, Titus, spent some time with the Jets. Titus had two stints on the Jets’ practice squad. He passed away last year from a rare kidney disease.

Corey wears a chain with a praying hands charm and a picture of him and his brother. Corey Davis said his brother "had a huge influence on him," and it means something that he was a Jet.

"It’s not only a football thing. It’s a life thing. That was my guy. I turned to him in every situation. He will be missed. It definitely means a little more to me that he wore the green-and-white as well."

Notes & quotes: Quarterback Joe Flacco, who started four games last season for the Jets, agreed to a one-year deal with the Eagles . . . The Jets announced the signing of former Saints defensive tackle Sheldon Rankins . . . The Jets also signed linebacker Del’Shawn Phillips, who spent last season with the Bills. Phillips appeared in two games and played just 14 snaps — all on special teams. He was in Falcons training camp in 2019. New Jets defensive coordinator Jeff Ulbrich was Atlanta’s linebackers coach at the time.

Corey Davis explains why he signed with the JetsWide receiver Corey Davis said the culture being estabilshed by new coach Robert Saleh is ...

Strahan remains an icon for current Giants players
Jets' Zach Wilson: 'I feel like I'm going in the right direction'
Jets continue mantra: We must cash in on opportunities
Giants' new offensive strategy: Find the plays to fit the talent
Other Giants coaches know their jobs depend on competence
Mets agree to terms with free agents Marte, Escobar, Canha
Didn’t find what you were looking for?